My curiosity to see the world and experience new cultures has brought me to some interesting places. Before traveling I always tell my parents where I’m going and how long I’ll be staying. They might mention it to their friends and so many times I’ve been told “Be careful, they’re racist over there, they don’t like black people”. This has never deterred me or stopped me from traveling to any country. `

To me, I feel like things can’t get any worse than in America. I feel like the most blatant racism I’ve ever experienced in my life was in America. The racism I faced was not only from Caucasians but from my fellow African Americans as well. You see I grew up in a middle class home, attended private school until eighth grade and then attended a high school in a predominantly Caucasian neighborhood. Then for university, I attended a PWI in Southwestern Virginia. I was always the only person that looked like me in all of my classes. In high school I was lucky if there was another person that looked like me in my classes and in university, it was a stretch to think that I would see somebody like myself in my lectures. It happened but for the four years that I attended university I can count on one hand how many lectures I had that had students that looked like me. For me, it wasn’t anything new, in fact it was the norm.

When I did meet other people that looked like me in high school and even in university, I can’t even tell you how many times I was told, “You talk like a white girl”, or “Are you even black”, and my personal favorite, “Well you don’t even count you’re not really black”. It did hurt my feelings that my counterparts would say things like this to me, but I tried my best not to let it bother me. It seemed as though I was too white for the black kids and too black for the white kids. I didn’t really feel a sense of belonging to any group. Did it affect me, a little bit but enough to where I didn’t appreciate or like my blackness. I don’t think that because I’m biracial that it discounts my blackness, because in America no matter what I am considered black, and that’s the bottom line.

Before moving to Spain, I was told by so many people that it might not be as great as I think, people will be rude to me and that I’ll have many racial encounters. I took what people were saying like a grain of salt and didn’t really pay it any mind. I figured that when I got to Europe, I’d decide for myself. After all, moving to Europe after university had been my dream since high school and I wasn’t going to let anybody’s negative notions stop me from moving.

I feel like when I’m traveling, I’m a walking lesson.

I can’t speak for everyone because everyone doesn’t have the same experience abroad or while traveling, but for me personally, being black in Europe has been a blessing. When traveling I might get a few stares, but not the type of stare that says, “Why are you here, go back to Africa” or the type that says, “We don’t want your kind here”. The stares are more of curiosity because I look different. In most countries when I travel, I’m the only black person in the crowd, or in the streets and I never feel out of place or like I don’t belong. People will come up to me and ask me where I’m from and often times I’m told there’s no way I could be American. I might be asked where I’m from and when I respond with America, the person might looked puzzled and then ask where I’m really from. I’ve learned that for people who haven’t been to America before, believe that all Americans are white and that is why it is impossible that I could be from America.

The thing is, I feel like when I’m traveling, I’m a walking lesson. I think it’s beautiful to be different and to expose people to “my kind”. There is a misconception that black people don’t travel and I feel that when I travel and interact with people of other cultures, they see a different side. 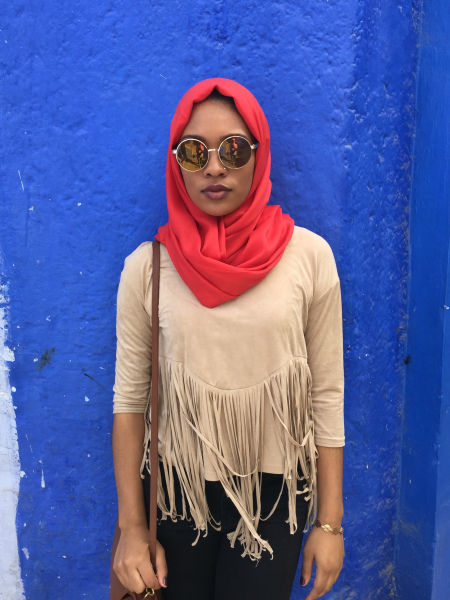 Just like before traveling to Morocco, I subconsciously characterized Muslims as violent people and in a way feared them, these people only see certain stereotypes of African Americans and hold these things they see on tv to be true. By the simple interaction with me, they can discredit these stereotypes and see what African Americans are really like.

It wasn’t until moving to Europe and traveling that I really came to appreciate my blackness. I was never judged or discredited because I’m biracial. I haven’t been told that I speak like a white girl, which could partly be due to the fact that Spanish is the official language of Spain; and I feel like I belong. I don’t feel like I’m too much or too little of anything. I’m simply me. When I go out, often times I’m still the only African American in the venue, at the party, etc. but this makes me stand out. I never feel uncomfortable like I did growing up in America but instead I feel appreciated. I feel more comfortable with my blackness. It’s almost as if my blackness draws people into me. They are curious and I gladly expose them to my blackness.

Traveling while black has never been an issue for me. I haven’t received dissatisfactory service because of my blackness, refused entry anywhere or been followed in a store because workers think I’m going to shoplift. Like I said before, everyone’s experience is different and I can only speak on what I’ve experienced since living and traveling abroad.

I think fear is only something made up in our heads. Fear makes you think that you can’t do something or brings about negative energy and that’s not what anybody wants. If you are a black person and you want to travel abroad but are afraid, I say travel anyway! Open up your horizons because the only way to find out how people will perceive you, is to just go! It may end up being the best trip of your life and open you up to a whole new way of thinking.

I’ve come to appreciate and love my blackness and I never let it stop me from visiting other countries. I hope you too appreciate your blackness and see that it’s your magic. If you aren’t black, I hope that you can understand the struggles and reservations black people may have while traveling.

TravelTraveling While Black Is a Radical Act
Tagged
Activism
What did you think of this story?
Meh
Good
Awesome