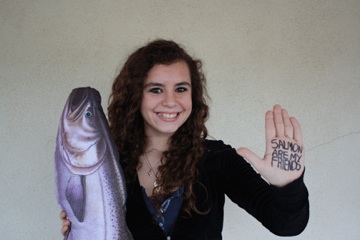 Photo: Save Our Wild Salmon

It’s not easy being an animal these days.

The BP oil spill has put animals living in already-fragile ecosystems at greater risk- animals like brown pelicans and other sea birds, sea turtles, and manatees and dolphins, according to the National Wildlife Federation. What’s worse is that BP’s legal liability for the spill is capped at $75 million under current laws, a figure that won’t even begin to cover the clean-up of damage that’s been caused, much less care for animals.

But beyond the oil spill, there’s another big news item this week that will affect animals significantly: the Obama administration is scheduled to release a federal salmon plan that will either signify the strengthening or the weakening of the Endangered Species Act.

Not surprisingly, the plan involves the administration making a decision between big energy interests and the integrity of species’ habitats. At issue: a choice to remove some dams and restrict future dam development (which would help endangered wild salmon populations recover and stabilize) or to give the green light to dam developers (which would increase the energy producing potential of the Columbia and Snake Rivers).

“Will Obama commit to species protection or to energy expansion?”

The decision is being viewed by both environmentalists and big energy interests as a test case for their respective causes: Will Obama commit to species protection or to energy expansion? The answer isn’t clear just yet, but the situation isn’t looking good for salmon: Obama’s administration merely dusted off a Bush-era plan and resuscitated it. Bush, if you’ll recall, wasn’t exactly animals’ best friend.

Regardless of the decision, the its implications are likely to be felt way beyond the western US where the wild salmon live. If big energy wins, they’ll know they’ve got the president in their pocket, and will likely keep pushing for their interests.

If you’d like to take action and encourage the Obama administration to “stand for salmon,” visit Save Our Salmon to learn more.