Lisa Lubin explains how to enjoy a week of good wine and great conversation in the heart of Spain – for free.

What if I told you that I just had a whole week’s vacation in a four-star villa in a small, beautiful village near Salamanca, Spain and it included three full meals a day with wine and it came with about forty new best friends …all for free?

Well, there was one catch — all I had to do was speak English. And considering it is my native language…it wasn’t all that difficult (OK, maybe it was difficult late at night after sampling a few too many Spanish wines).

Pueblo Inglés is not exactly a school for English—it’s more like an intense English experience. It’s a unique opportunity for native English speakers to immerse themselves in Spain’s culture and people firsthand in exchange for simply chatting with Spaniards.

And for the Spanish folks, it’s like an intensive week-long English ‘sleep-away camp’ which gives them the opportunity to improve and practice their English-speaking skills the best way—by force of course.

For the duration of the week, they are forbidden to speak Spanish and must converse in and listen to English at all hours of the day…easy for me, not so much for them.

I was trawling the web one day looking for a job or volunteer work in Spain when the website for Pueblo Inglés popped up.

The idea scared and intrigued me at the same time—not only would I be able to travel for one week without spending a dime (that’s 15 cents in Euro), it would enable me to meet and connect with real Spaniards who mostly come from the professional business world—something often hard to do when you are a tourist on a budget (or globetrotting vagabond like me).

I applied on a whim, not knowing if I truly wanted to commit to this week of constant jibber-jabber. I figured they probably wouldn’t accept me on such short notice or I could always say ‘no.’ Exactly one day later I received an email: “Welcome! You’ve been accepted to Pueblo Ingles!”

Oh, and it was starting in two days. Time to high-tail it to Madrid.

The morning of the eight-day program we all gathered in a plaza in Madrid and were herded onto a bus. We rode for three hours west of the capital city to a tiny rural town called La Alberca full of winding cobblestone lanes. The countryside was dotted with clusters of trees, all dropping acorns and chestnuts onto the hilly green backdrop.

Our hotel was in a bucolic setting with shady paths and ponds and was more like a group of several chalets. I was joined by about 20 English-speaking volunteers from Canada, the US, England, Australia, and Ireland and 20 Spaniards from all over Spain with ages ranging from early twenties to sixty plus.

The program directors, Pablo from Spain and Akemi from California, laid down the law at the get-go: The most important rule of Pueblo Ingles–NO Spanish allowed. They really wanted this to be a true and hardcore immersion experience for the Spaniards—basically forcing them to drink, eat, sleep, and possibly dream in English.

Each morning after pants-splitting buffet breakfast we paired off into ‘couples’ for ‘one to one’ conversations that would last about 50 minutes. After a ten minute break, we would then swap and grab another Spaniard for the next hour and so on.

It was a bit like a speed dating scene—everyone gabbing at once, getting to know each other.Everyone was unique, friendly and fun. Despite my initial fears, we never once ran out of things to talk about. 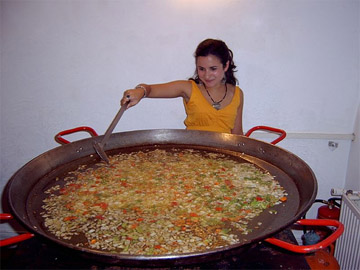 Everyday I was paired with different people and we constantly did different activities. It certainly was an odd and funny sight to see all these coupled pairs of people wandering around the grounds, sitting in chairs, and strolling down the street.

If someone didn’t know better, it probably looked like some kind of psychiatric institution or rehab center at which we were all getting over our drug, alcohol, or other addictions. Of course, if they saw our parties every night, they would probably think it wasn’t a very good program.

We would usually have a break sometime in the morning and also other activities like games, conference calls, and presentations—during which lucky Spaniards got to tell us all about their jobs, or Anglos entertained us with some kind of unique skill they have (singing, dancing, and other random embarrassing behavior).

A tasty three-course lunch with plenty of vino (nothing gets conversations going like some cheap wine) was at two o’clock, followed by the very crucial Spanish siesta (nap time) which I really think we should instate here in America.

At five o’clock we continued with more talking, fun group discussions about anything and everything and hilarious skits.

It reminded me of some university days doing role playing and brainstorming to come up with the most entertaining performance. It was fun to just be silly and what I really remember most is laughing almost all the time.

One day we toured the lovely nearby medieval village for a bit of a break. A three-course dinner with more wine, of course, was at nine (a little late for the Anglos and too early for the Spaniards) and then their Inglés would really get tested as many of us hung out at the bar until the wee hours of the morning.

The Spanish really know how to party.

Jesus and David made me laugh my ass off. Vicente made me feel like the queen of the dance floor. Cecilia was a sweetheart who invited me to stay in her home in Madrid after the program.

I can’t say enough about the new friends I made here. Yes, the program was free and that was my initial draw to it, but I realized later that the experience was ‘worth’ so much more.

The beauty of this program is that your entire schedule is laid out for you. There is really nothing to worry about. I had my own small ‘villa’ that I shared with Potola, a boisterous and hilarious flight attendant from Madrid.

Our ‘casa’ was just steps from the lobby and bar so it was so easy to stumble to bed before sunrise, and get up the next morning (even if it was only a few hours later) and just walk over to my next session of speaking English. There was no commute, no metro, no taxi. You just walked home in two minutes. Life was simple and good.

It was easy for me, but much harder and more tiring for the Spaniards who had to do everything in their second language. Imagine being constantly forced to speak Spanish all day. Your brain would be so tired. And even when they were ‘enjoying the fruits of the vine” (read: drunk) and dancing they were still speaking English.

After a week of fun, we all ‘graduated’ and received our certificates for completing not only a week long English ‘course’ but one of the most fun weeks I’ve had in a long time.

All in all, the 8 days spent at Pueblo Inglés was like an intense microcosm of life—a condensed, easy version and having to say goodbye after our amazing week together was hard for me.

Hopefully the Spaniards improved their English and I know I have made some amazing new friends in Spain that will remain in my heart and hopefully in my life forever.

To find out how you can have a free week in Spain, check out: www.puebloingles.com.

How travel frustrations can transform you