WE NEWFOUNDLANDERS sometimes have trouble realizing we’re surrounded by awesome stuff. We grow up by the ocean and those icebergs drifting by our kitchen window are no big deal. Everyday occurrences.

That’s a bit of a stretch. But it’s true we take things for granted. Sometimes we need a journey away from Newfoundland to recognize this place’s value, and sometimes it takes an expat.

This was the case of the Puffin Patrol, a wildlife rescue mission that’s been around for seven years but somehow only reached my ears this year.

I got in touch with Juergen Schau, a German film producer who spends his summer days in Witless Bay. He directed me to the Puffin Patrol Headquarters, also known as his garage. He’s been heading off this whole thing since day one, but for some reason has only gained notoriety this year in the media and outside the tiny town. Apparently people are smitten with baby animals. 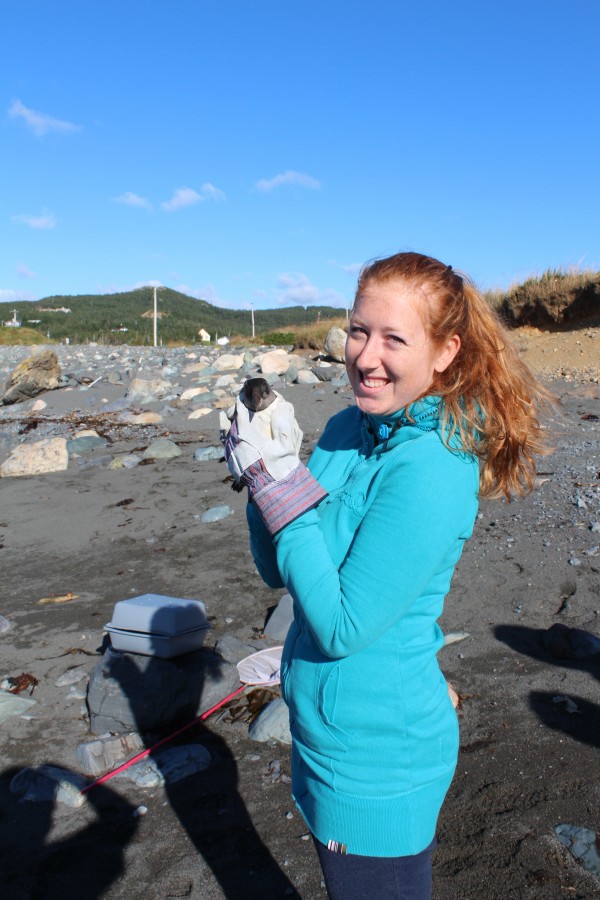 Witless Bay is home to the Witless Bay Ecological Reserve, where hundreds of thousands of seabirds come to nest: Leach’s storm-petrels, black-legged kittiwakes, the common murre, and, of course, the puffin, Newfoundland’s provincial bird. The reserve has North America’s largest Atlantic puffin colony, with more than 260,000 pairs nesting here in late spring and summer. You can see the reserve by one of the many boat tours. You’ll come upon the islands where the sky darkens with birds swooping and squawking. Don’t look up with your mouth open.

The problem with the reserve being close to town is that it tends to get the brunt of human influence. The baby puffins suffer the most.

When a puffin chick leaves its burrow for the first time, its instinct is to follow the light of the moon as they migrate south. They get distracted by the lights of civilization, become stranded on the road, and then either get killed by traffic / wild animals, or thrown off course.

Schau had noticed the stranded baby puffin phenomena years ago, but nobody seemed to have a solution. With a bit of research, Schau found out that other countries, like Iceland, were having the same sort of issues with stranded chicks. And puffin lovers were organizing their own rescue teams.

Rescuing baby puffins. It’s as adorable as it sounds.

Schau organized a team of volunteers to take turns patrolling the area every evening, from sundown until about 2am. Anyone can do it, and even the local children are involved. It’s turned into a community affair: The Needs convenience store hands out free coffee to patrollers, and after puffin releases, folks gather for tea in someone’s home.

At the Headquarters, Schau suited me up with a reflective vest, gloves, a butterfly net, and an empty lobster box. He told me that the season was already winding down, having begun unusually early this year.

“Normally, the migration lasts for about four weeks, until late September. This year, they started early and we only have maybe two days left for the Patrol,” he told me.

He handed me a large flashlight, and we boarded the puffin-mobile. If we were to find a bird on the side of the road, someone would have to focus the light on it while the other person scooped up the chick with a gloved hand to place it in the net. The chicks tend to freak out, but Schau assured me he could get them to relax by tickling their heads. (Note: That usually works for me, too.)

The babies are then stored in boxes in Schau’s garage, by the woodstove, for release the next morning.

We didn’t find any. No puffins are better than dead puffins, but I couldn’t help feel a little disappointed…especially given the success rate of this year. The Patrol has rescued over 500 puffins, including 71 in one night. Last year, only 28 puffins were rescued for the whole season.

Nobody’s really sure why there’s been such an increase, but it likely has to do with the weather. This year’s summer was exceptionally warm; last year it was so cold, the chicks starved and froze to death. Researchers’ cameras caught shivering baby puffins in their burrows. I know, I weep too.

Two days passed, and I found a voicemail message on my phone from Schau. They had found one last puffin, and it was time to let him go. 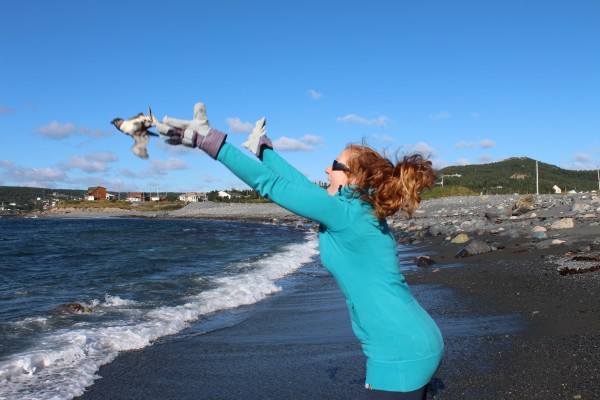 I showed up at the Headquarters bright and early. I tip-toed up to the little lobster box near the woodstove and peaked inside. There he was, Blueberry the lost puffin. Even though I hadn’t found him, I’d be releasing him. I was giddy.

We headed down to the beach where two American tourists were already waiting for us. They had heard about the puffin release, and were already waiting to see it all go down. Schau gently removed Blueberry from his temporary home, and we all cooed. He was passed around for photos, the poor guy all alert and chipper and wondering what the hell we were going to do to him.

Finally, little Blueberry was put into my hands. I felt weird about forcing him still as I made my way to the water’s edge. “Don’t be scared, little dude,” I whispered to him. I was supposed to squat and heave the chick into the air, catapulting him back into the world. I was nervous about it, such a big responsibility for such a delicate creature.

I crouched, ready to aim.

“On the count of three!” shouted Schau. “One…two…THREE!”

And with that, I threw a baby puffin into the sea. That awkward, clumsy kind of girly throw. And the poor creature kinda flopped immediately into the water, not far from where I stood. “It’s okay,” assured Schau. “Let’s watch.”

We observed Blueberry dive for the first time. “He’ll groom his feathers next,” said Schau. And that’s exactly what Blueberry did. I was elated. I had freed Newfoundland’s provincial bird.

We all cheered, clapped, bid farewell to Blueberry and called it a job well done. Connected by the universal high of doing something good.

Tagged
Travel Newfoundland and Labrador, Canada
What did you think of this story?
Meh
Good
Awesome
✖
travelstoke
Download the mobile app
stoked by