I was walking with Francisco and Mariel in Union Square a couple weeks ago when I saw a skeevy-looking guy holding a hand-lettered sign: “Restore adult services to Craigslist.”

He was the kind of guy who looked like he’d never be clean no matter how much he scrubbed. He looked like a perv. I pulled Mariel closer and kept walking. Who would actually stand in Union Square and hold a sign like that? Was he a provider of said services? A “client”? Both? Neither? And what did he expect people to think or do when they saw him with the sign?

I had to give him some props, though; he had balls.
**
Craigslist is an inelegant but often useful website launched in 1995 by Craig Newmark. I found Matador through Craigslist. I’ve used it for home swapping and subletting my apartment, finding gigs to keep me financially afloat when I quit my job as the assistant director of a social service agency in New York, and looking for a dogsitter. If you’re not familiar with Craigslist, just imagine the classified section of your newspaper, but online, with hundreds of sections, including pages for most major cities around the world.

Like Google, Craigslist won’t win any awards for its aesthetics, but it gets the job done, apparently. Its FAQ page says the site receives more than 20 billion unique views per month, making it the seventh most trafficked site in English.

In other words, Craigslist is a major player.
**
Turns out, though, the site is a player in other ways, too. 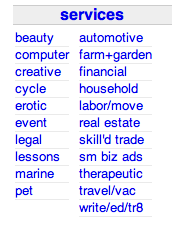 Opponents of the “Adult Services” listings contended that the site facilitated human trafficking, especially of women and children. CNN took Craigslist to task for profiting from the sex ads– to the tune of $36 million in 2009 alone–and suggested that the brisk business of “Adult Services” made the company’s management resistant to shutting down that section of its site.

Though it’s free to list most goods, gigs, and services on the site, Craigslist charges a fee to brokers and individuals listing certain services, including “Adult” and “Therapeutic” services. These fees support the site’s operational expenses, so it’s not surprising that Craigslist would be opposed to shutting down this part of its site completely.

Craigslist, for its part, touted the many security measures it took to pre-screen would-be traffickers, including:

On August 10, a month before he changed course and decided to shut down the “Adult Services” section, Craigslist CEO Jim Buckmaster argued that ceasing “Adult Services” listings would actually push human trafficking even deeper underground. In an opinion piece he wrote that was published by CNN, Buckmaster stated:

“…declassifying adult services ads back into Craigslist personals, services, and other categories, and offsite to venues that have no interest in combating trafficking and exploitation or in assisting law enforcement, would simply undo all the progress we have made, undermine our primary mission of evolving Craigslist community sites according to user feedback, set back the efforts of our partners in law enforcement and exacerbate the very societal epidemic we all seek to end.”

Opponents and the media kept the pressure on Craigslist, though, and the company finally pulled the plug on the “Adult Services” section on September 3.

But that was only in the United States.

What’s the message Craigslist is sending by keeping these listings running in every country but the United States?

That’s a rhetorical question, of course.

Visit Change.org to sign a petition asking Craigslist to shut down all of its “Adult/Erotic Services” listings around the world.

Matador travelers and editors have encountered trafficking survivors in their travels. Read Matador Goods’ editor Lola Akinmade’s account of one such encounter in the blog post, “Trafficking Innocence.”