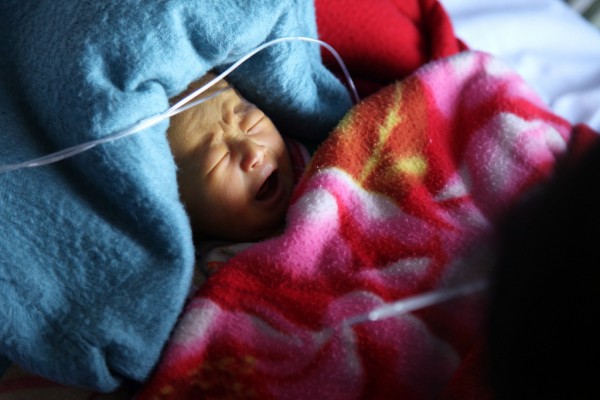 The walls of Seoul’s Jusarang church are brightly painted with butterflies and ladybirds. This is how a desperate new mother will know she has come to the right place. After climbing the steps alongside the church she will see the Baby Box, and know she is saved. Above a hatch in the wall, a sign reads:

For a birthmother that could not raise her special needs baby or unwedded birth, please pull the handle below and leave your baby inside.

She opens the hatch to find a small makeshift bed, heated and well-lit. Once she places the baby inside the box, an alarm goes off and the inhabitants of the house come running. They rush to open the hatch from the inside and retrieve the bundle. The words just above the handle to the box read:

Though my father and mother forsake me, the Lord will receive me.
Psalm 27:10

These babies, now lost from their mothers forever, will never know their real names.

Pastor Lee Jong-rak and his wife Jeong Byeong-ok first built the Baby Box in 2010, a place for parents to abandon their children without repercussions. They created the box after discovering a child abandoned outside their church in the winter. Thanks to journalists and documentary filmmakers, news of the Baby Box has gone viral, making Pastor Lee an online celebrity and digital saint. But while the internet is brimming with adoration for him, he has left Korean adoptees and activists concerned and frustrated — and the government wants to shut him down.

According to Korean law, all babies must be registered, including those who will be adopted. South Korea remains one of the largest exporters of international adoptees in the world, having sent about 200,000 children abroad since the Korean War, despite having experienced a rapid improvement in material living standards in that same time.

In an effort to bring down the rate of international adoption, single-mother support groups and adoption activists have worked to amend the Special Adoption Law. Recent revisions made birth registration a prerequisite for adoption to eliminate false records. In many countries, it’s illegal to adopt a child unless it’s an orphan. Adoption agencies often created ‘paper orphans’ to combat this, cutting all ties between a child and its family. The law now mandates birth registration, promotes domestic adoption, and supports mothers intending to give up their babies for adoption.

Whether or not they have a disability, these children have an uncertain future. Because their births are not registered, babies abandoned in the box cannot be legally adopted by anyone at first, and later only within Korea. They are unlikely to stay with Pastor Lee, who already cares for about 20 children, most of whom have a mental or physical disability. It’s very difficult for babies with disabilities to be adopted, probably because there is great stigma surrounding disabilities, as well as a lack of welfare facilities available for them. A note from a mother who abandoned a baby with a disability reads:

He has this handicap. I am so sorry, but I am not able to raise this baby, so I put him safely in the baby box of Jesus-Loving Union Church.

Domestic adoption in Korea is a rare and lengthy process, and most adoptees will live in state care for many years and eventually be registered under the name of a social worker. But since the increased fame of the Baby Box has caused children from all over the country to be abandoned in Seoul, some of these facilities are coming under strain. The Gangnam Children’s Home, originally for older children, began taking in infants in 2012. Without sufficient government funding, the home is without certain essentials, such as running water.

For those who are adopted, a lack of birth records makes any later attempts to find their birth parents and trace their heritage almost impossible. This violates the child’s human rights, as outlined by the United Nations. According to the UN, every child has the right to an identity. They endorse birth registration worldwide, and have called for a global ban on baby boxes.

These children, without any ties to their family and limited access to child welfare support, are not the ones being saved from a life of adversity by Pastor Lee. It’s their mothers who marginally benefit from the Baby Box. The box has highlighted the hardship single mothers face in South Korea, as many choose to abandon their babies rather than face the inevitable discrimination associated with having illegitimate children.

Abortion is illegal, but widespread: 96% of pregnant single mothers abort, and another 3% give their children up for adoption. Government data shows that 90% of 2012 adoptees were born to those publicly referred to as mihonmo, which means ‘not yet married’ or ‘unwed’. All children and marriages are reflected on public family records, which are seen by employers, and many single mothers are prepared to take great risks to keep their children a secret. Although the birth registration will leave their records once the child is adopted, even temporary discrimination is too high a burden for some. After the enactment of the Special Adoption Law in 2012, abandonments increased dramatically. One note left in the box reads:

I am sorry to do this to my baby who hasn’t even seen the light of the world…Because I can’t raise this child nor have the ability, adoption is a better alternative. However, I have already looked into adoption, but due to the changes in the law I am required to register the baby, and I cannot get a hold of my boyfriend as I needed some documents…I have no one to discuss this with, so I searched for the Baby Box.

Pastor Lee believes the law has forced mothers to abandon their babies because it demands birth registration, mentioning some of the notes mothers leave in the Baby Box as proof. “If you look at the letters that mothers leave with their babies, they say they have nowhere to go, and it’s because of the new law,” Lee told Reuters. But activists say this is because the public has not been educated about the changes in the law. Many don’t know that there is a process called ‘partial registration’ in which registered births are kept private.

Since it enables abandonments, the government considers the Baby Box illegal. But shutting the Baby Box down may be treating the symptom rather than the cause of these abandonments. Advocacy groups such as the Korean Unwed Mothers Families Association (KUMFA) are urging the government to support single mothers economically (they currently receive about $70 a month), and shift social attitudes. Pastor Lee has also said there would be no need for the box if government welfare was sufficient. He told CBN: “There is no reason for the baby box to exist if the government takes care of the children’s safety and making them happy. [The] Baby Box should go, but right now there is only inaction and lack of concern.” Currently, there is no comprehensive national child welfare program for abandoned children, as the state relies on regional programs to provide support.

Baby boxes have existed to combat infanticide throughout history, and we can assume there will always be a small percentage of abandonments in any country. Pastor Lee and Jeong Byeong-ok built the Baby Box for children who would otherwise be left on the street, but their fame is attracting those wanting to avoid disgrace and destitution. For many single mothers in South Korea, the lack of support from their community and government is all that prevents them from raising their children. One more note left in the Baby Box reads:

I have no choice but to give up this baby like this as I have left my husband due to the trouble with him and the in-laws. But we are not divorced yet, and there is the first child, and I am afraid to register this baby under my name.