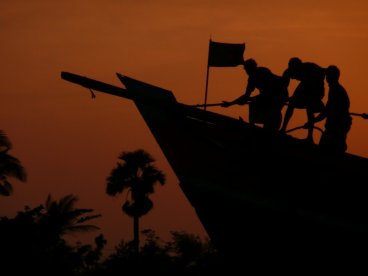 Until relatively recently, pirates were characters with eye patches, wooden legs, and parrots who existed only in classic adventure books, bad movies, or on the labels of Caribbean rums. They were foul-mouthed, greasy-haired bad guys who had a penchant for drinking too much, and they spent their days strategizing about how to protect treasure chests full of coin they’d stolen from others.

But as John Burnett, author of Dangerous Waters: Modern Piracy and Terror on the High Seas

–a book about his own experience of being hijacked by pirates–has noted, modern piracy isn’t nearly so quaint:

“Today’s breed of pirates are not the colorful cutthroats painted by the history books. Unlike the romantic images from yesteryear of Captain Kidd and Blackbeard, they can be local seamen looking for a quick score, highly-trained guerillas, rogue military units, or former seafarers recruited by sophisticated crime organizations.

Armed with machetes, assault rifles and grenade launchers, they steal out in speedboats and fishing boats in search of supertankers, cargo ships, passenger ferries, cruise ships, and yachts, attacking them at port, on the open seas, in international waters. Off the coasts of Somalia, Nigeria, [and] Southeast Asia, entire ships are hijacked and cargo and crews simply vanish.”

That, or they’re held for ransom.

One of several pirate dramas of the past week involves a US ship seized by Somali pirates who are currently demanding $2 million USD in ransom to release their hostage, Captain Richard Phillips. At present, it’s unclear whether Maersk, the owner of the ship being sailed by Captain Phillips, will consider paying the ransom. The US government, for its part, has a policy of not paying ransom in exchange for property or life.

While shipping companies and governments affected by piracy have handled ransom demands in different ways, the general consensus is that paying ransoms will only make pirates more bold and more active.

James Christodoulou, CEO of Industrial Shipping Enterprises Corp., understood this argument, but chose to manage a hostage and ransom situation differently. His company paid a ransom of more than $1 million USD to Somali pirates in exchange for the safe return of its ship, cargo, and crew.

Asked why he made the decision to pay a ransom, Christodoulou said:

“At the end of the day, my job [to…] people who entrusted their lives to me when they sign onto my ships was to ensure that I would get them home to their families safely….I would do anything I had to do to make sure I got them home.”

Should ransoms be paid? And what are the appropriate roles of private businesses, of governments, and of international organizations in responding to the increasing acts of piracy? Share your opinion below!