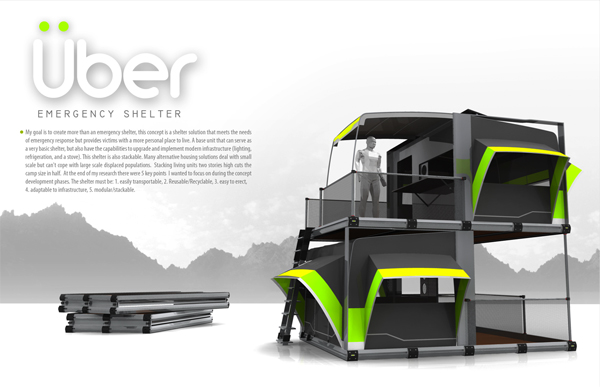 All images courtesy of Rafael Smith
Irrevocably inspired by what otherwise should have been a leisurely vacation in the Philippines, Rafael Smith, a senior in industrial design at Purdue University, returned home with the seeds of the Über shelter idea already taking shape inside his head.

A few weeks later, he stumbled upon an article about the need for better shelter solutions in refugee camps. It was then that Smith knew he wanted to focus his design on refugee shelters.

“From the beginning I knew I wanted to get away from consumer products, which is a grand majority of what we concentrate on as industrial design students. I knew I wanted to do something that addresses the basic needs of the living,” Smith said. “I wanted to design a project that would impact people’s lives.”

Primarily made of recycled aluminum, the refugee shelter Smith designed utilizes lightweight materials and focuses on sustainability. The Uber Shelter is collapsible and intentionally designed to be erected with few tools, minimizing potential transportation and construction complications. Additionally, each structure is stackable, which can help cut the size of refugee camp sites in half. 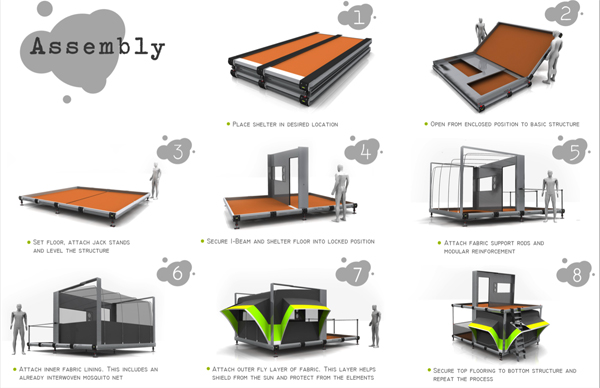 As a base unit, Über meets the immediate need for shelter after an initial crisis. But Smith is also focused on providing the most beneficial design for refugees. After speaking directly with a Sudanese refugee about camp needs, Smith decided to incorporate the three modern conveniences of a stove, electric lights, and a refrigerator in his design.

These conveniences are shipped and distributed in a separate upgrade package after basic shelter needs have been satisfied. For Smith, Über is a “shelter solution that meets the needs of emergency response but also provides refugees with a more personal place to live.”

While the Über Shelter is the recipient of designer, environmentalist, and activist acclaim, it still has a long road of refinements ahead. Smith is currently focused on reducing the shelter’s weight and cost for easier shipment and maximum dispersion.

“I think the base idea is very strong; however, there are several improvements that need to be made before this idea will be a serious candidate for replacing other shelter solutions,” Smith said.

“My plan is to create the best possible product with the resources I have. If the idea is good enough, I have no doubt that along the way the right people will help take this to the next level.” 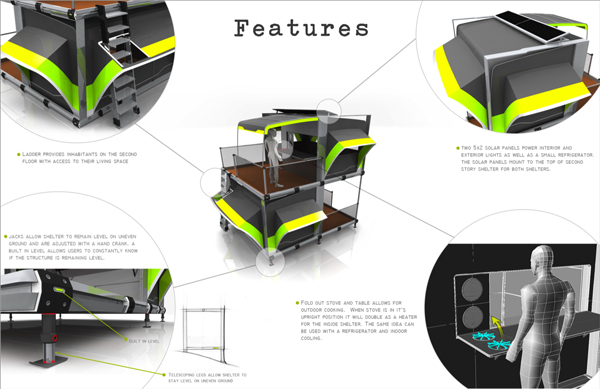 Among those who have taken an interest in Smith’s project is Josh Messmer, who offered his civil engineering skills to help refine Über’s structural stability and engineering issues. Smith knows that for Über to become a truly useful shelter solution, he needs the input of other professionals.

With this in mind, he elicits opinions and criticism from other designers and engineers; he also presents his project in front of panels of competition judges. Smith also admits to the personal need to experience poverty first-hand in order to design truly effective products to help combat it.

For Über, Smith ultimately hopes the final product can be shipped all around the world by being able to adapt to different climates. Once a crisis is resolved, the shelters can be cleaned out, packed up, and shipped to the next location that needs them.

“I realized how much potential and need there is for design as a means to address poverty. The separation that exists between rich and poor nations and individuals became very real to me during this project,” Smith said. “If [my] idea is truly good enough, I can’t imagine any better feeling than seeing people benefit from this product in a refugee camp or after a disaster.”

Learn more about refugee situations by reading “Waiting for Life to Begin in a Burmese Refugee Camp.” If you’d like to make a direct difference in the lives of refugees, be sure to peruse more than 350 organizations in Matador’s community, many of which provide services to various refugee groups.