GREAT WHITE SHARKS are on the brink of extinction, and Ocean Ramsey is doing something about it: She’s swimming with them. Ramsey, a professional scuba instructor, marine biologist, conservationist, model, surfer, and free diver — I definitely just got winded typing out that resume — has been bringing attention to the plight of great whites and other sharks by getting out of her shark cage and swimming with them.

This culminated recently with an incredible video Ramsey shot with a GoPro:

She has now swum with 32 different shark species, including the great white, and she says she’s doing it to try and dispel the myth that sharks are “killing machines,” a myth that has been lazily propagated by the media and pop culture ever since the movie Jaws.

“In truth,” she writes on her website, WaterInspired.com, “sharks are intelligent, calculated and generally very cautious about approaching humans. More importantly, sharks play a vital role in maintaining a healthy ocean ecosystem. Many people are unaware that sharks are being over-fished to the point of extinction. As the Senegalese environmentalist Baba Dioum said, ‘In the end people will only protect what they love, and only love what they understand…’” 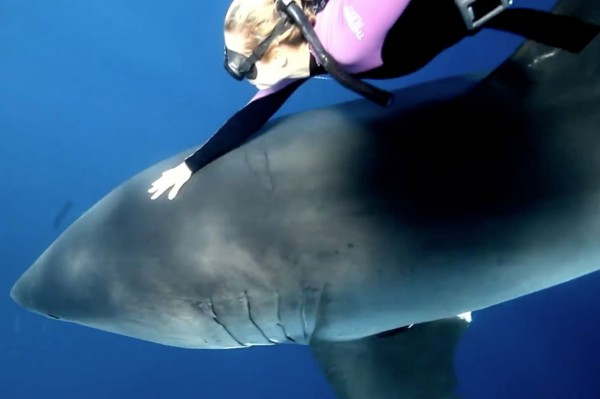 Great whites are apex predators, which means they’re at the top of their food chain and have virtually no natural predators of their own. Apex predators are absolutely crucial to the stability of their environment.

For example, when Yellowstone National Park recently reintroduced wolves — the habitat’s natural apex predator — into the wild, the effects were astonishing: Not only did it bring some measure of balance back to the ecosystem, but it increased biodiversity, helped trees grow taller, and even changed the course of the rivers.

So it follows that the loss of apex predators such as wolves or great white sharks can be absolutely catastrophic to their environment. But that doesn’t stop us from killing them in absolutely staggering numbers — somewhere between 23 million and 200 million sharks a year are killed in the senseless and inhumane act of finning, where fishermen catch a shark, cut off its fin for shark fin soup, and then just dump the animal back into the ocean to die.

Which species, again, is the killing machine? 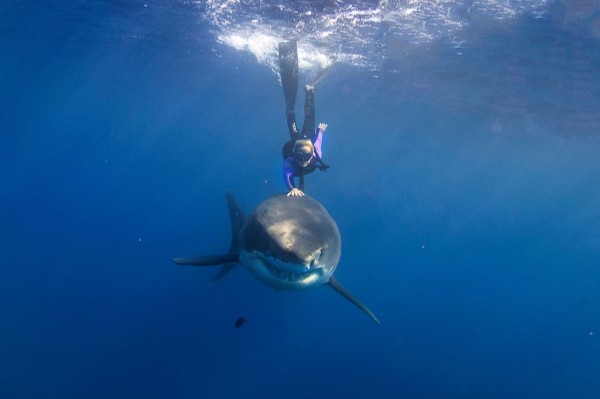 Sharks kill an average 11 humans per year, while we kill around 11,417 sharks per hour. “There are estimated to be less than 400 white sharks in the North Pacific and less than 3,500 great white sharks left worldwide,” Ramsey writes.

“More than eighteen million people die from starvation and 1.2 million from car accidents. Crocodiles kill more than 2,500 people per year, and even they are protected in many areas. The world offers little to no protection for sharks. Sharks are vital to the oceans and planet. They need and deserve to be protected.” 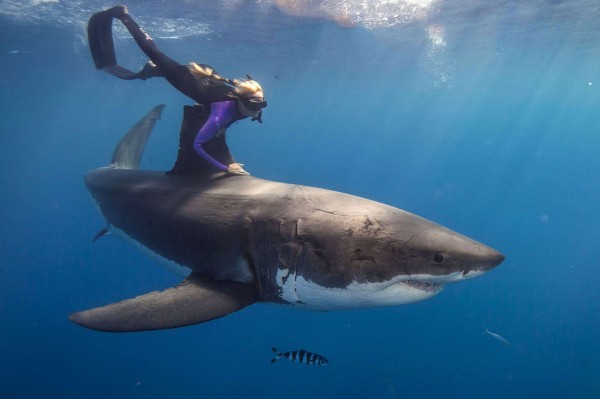 This isn’t to say you should go for a swim the next time you see a shark, as Ramsey explains: “I’m not advising that people go out and just jump into the water with white sharks or tigers or other large species, just as I wouldn’t recommend jumping into a yard with a strange dog. Sharks do need to be respected as wild animals and appreciated for their role as top predators in the ocean ecosystem.

“My shark experiences have all been positive in part because, while I know sharks are not mindless man-eaters, I simultaneously have respect for their capabilities, a lot of experience interacting with animals and reading body language, behavior, and I am comfortable with my own water abilities while also trusting my dive partner.” 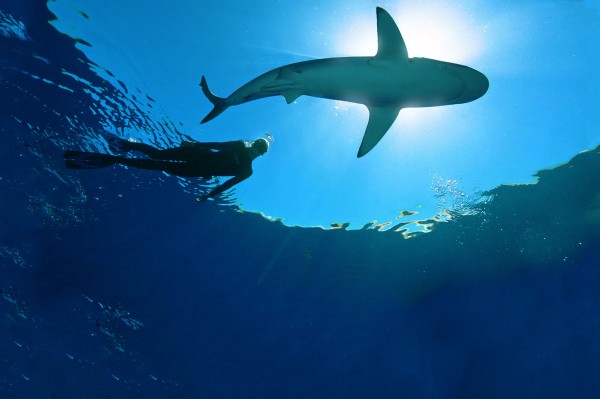 If you’d like to help in this cause, first: Don’t eat shark fin soup in your travels. It’s brutal and unsustainable. Second, Ocean Ramsey’s site has provided a ton of awesome petitions you can sign to help, and a bunch of projects and charities you can donate to.