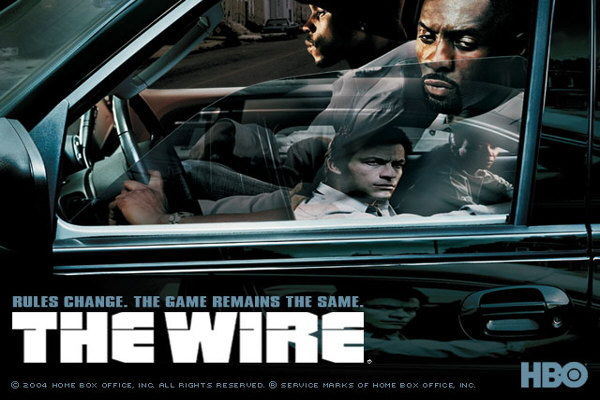 Hailed as great television, The Wire premiered in 2002 and has been steadily winning converts ever since.

This mind-blowing television drama lets you get more than just an in-depth look at the less respectful aspects of Baltimore, Maryland.

It snatches your very purpose for living so that you can do nothing but live, breathe, and eat episodes until a season is over.

Whether you want to or not, you’ll enter synaptic Shangri-La with each season of The Wire.

David Simon, the series’ creator and one of the main writers for the show, is a former police reporter.

Ed Burns, producer and co-writer, is a former Baltimore homicide detective. Three of the staff writers for The Wire are acclaimed crime fiction writers.

All this experience and dedication to their craft results in incredibly realistic and current dialogue for the show.

From street hustle slang to prevalent homoerotic police humor, The Wire stays true the nature of its subject and doesn’t water anything down for television audiences.

Seasons 1-5 of The Wire each delve into a different facet of Baltimore.

Starting with the city’s street drug trade in Season One, The Wire digs deep into the topic at hand, wrangling out dramatic story lines, unexpected plot twists, and nerve-wracking developments.

Viewers almost don’t know which characters to invest in, which sides to root for, which outcomes to be pleased about, as plots and characters are relentlessly complex and convoluted.

Each season is tangentially related and, while each certainly can claim brilliance with its own plot, the sum of all parts is really what pushes The Wire into legendary television status.

Having both incredibly imaginative writers work alongside true life experience writers, The Wire concedes no room for blanket generalizations.

Every season’s subject is thoroughly documented; every little nuance contributes to the show.

Street corners are lain out by coordinates, marked by territory lines, and subject to the ebb and flow of drug-addled customers. Police wakes are unexpectedly rowdy, Irish in nature, and drowned in alcohol.

You’re guaranteed massive visual and mental stimulation with this series.

Season Four focuses on Baltimore’s school system and a group of junior high boys whose lives are tugged around by the city’s drug trade and lack of educational funding.

Nowhere near to being angels themselves, these boys nevertheless steal your heart with their naivete, silly humor, and all-around childhood goofiness.

Children being inherently good is a common belief and one that’s heavily played upon in this season. You’ll find yourself hoping for these kids to make it to higher education and a more promising future, crushed and frustrated for those who don’t, and relieved for those who do.

You’ll never be more emotionally invested than in this season.

Omar Little makes his debut in Season One with a few quality appearances introducing himself as an infamous, drug stash robbing homosexual that all gangs fear. No matter how heavily a stash is guarded, Omar makes it his business to rob gangs blind. He likes the challenge.

Armed with his shotgun, long facial scar, and strong sense of pride, Omar saunters the streets whistling his notorious tune and smoking cigarettes.

His intelligence is undeniable. His humor is unintentional. His method is inventive. Omar Little is a character that doesn’t fail to stamp an impression on audiences. With a new boytoy every few episodes, Omar forges his own unique path in Baltimore’s criminal and political web.

And you’ll be hopelessly charmed as he does.

Ask your grandmother for money. Have your significant other buy it for you. Use that gift card you’ve been saving. I don’t care what you do, just watch it.