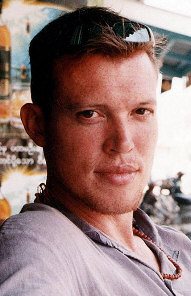 I confess: I’ve been avoiding Rolf Potts for a long time.

More than one admiring writer has gushed that Potts is a “guru,” and I tend to shy away from gurus.

And besides, he looks way too cool in his author photo.

And people who look way too cool….well, they just annoy me.

If you’re not guru or cool-person-averse, you’ve probably already heard about Potts’s most recent book, Marco Polo Didn’t Go There: Stories and Revelations from One Decade as a Postmodern Travel Writer.

There’s been no shortage of press for this book: by the time Marco Polo hit the shelves, Potts was already making rounds on a virtual and physical book tour, stopping here at Matador, World Hum, and Intelligent Travel, among other sites.

Meanwhile, I cracked the spine on my review copy.

Potts is adept at telling an engaging story. Like anyone on the road long enough, he’s accumulated a catalog of travel tales. 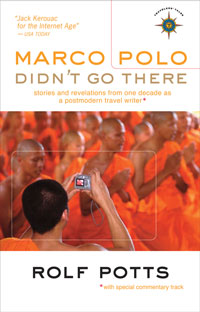 The majority Potts shares in Marco Polo are standard traveler fare—getting mugged, making crazy decisions we’d never consider at home in similar situations (like hitching a ride with a carful of strangers), feeling tugged between our conflicting desires to “see the sites,” on the one hand, and to totally avoid them, on the other.

What makes Marco Polo stand out, though, is the way in which Potts tells his stories.

While there are spots that are tiresome—“I’m starting in on my second day on Phi Phi Don island, but… I didn’t write anything yesterday”—Potts gives almost all of his stories depth by enriching his firsthand experiences with research.

He references writers as diverse as Walker Percy, Claude Levi-Strauss, and Gustave Flaubert, and he goes home to search for historical details about a place when its local dynamics elude him.

And he’s transparent about his own writing process; perhaps the most interesting part of Marco Polo is the “special commentary track” in which Potts talks about how he constructed his stories and why he made the narrative choices he did.

There are other reasons to like Marco Polo. Potts clearly likes adventure, but fortunately, he’s no Thomas Kohnstamm. Potts respects the people he meets on his travels–never more evident than in “Death of an Adventure Traveler”—and he’s refreshingly free of the macho bluster of so many other travel writers in his age cohort. 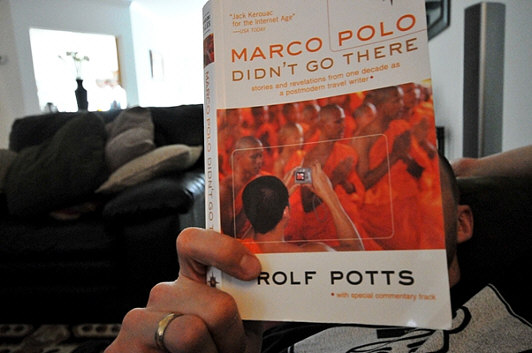 It’s not that Potts is an abstinent, ascetic traveler (he confesses to nurturing a boyish crush on every single one of the bikini clad girls on a ship in the Mediterranean); it’s just that he’s able to keep it in his pants… or to have the discretion not to tell us when he doesn’t.

Marco Polo is a travelogue equal parts entertaining and thought-provoking. I’ll send my review copy to the first reader who leaves his or her Matador profile URL and the reason you’d like this book in the comments section below.