View all travel news
Top Countries
Top CitiesView All Destinations
Trending Regions
Trending Cities
Load More
Matador is teaming up with the FFR1 to show you what conflict and foreign freelancers carry with them on assignments.

Nish Nalbandian is a photojournalist, documentary photographer, and filmmaker who has worked in over 35 countries worldwide in a variety of environments and situations from wars to sporting events, back alleys to luxury resorts, from cities to remote deserts. He is most interested in making pictures and films that show the humanity of those he’s photographing and believes that curiosity, empathy, and compassion are what make for great photography. 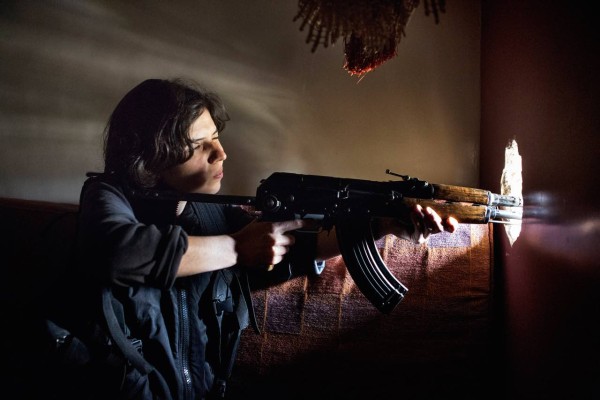 Rukan, a female YPG fighter and unit leader aims her weapon from a fighting position in the Sheikh Maqsood districgt of Aleppo, Syria on April 19, 2013. The YPG (Popular Protection Units) of the Kurdish Democratic Union Party (PYD) considers itself a popular democratic militia with the mission of maintaining order and protecting the lives of those in the primarily kurdish districts of Syria. In March of 2013 the YPG and FSA began to cooperate in the conflict against the Syrian Regime.
Photo: Nish Nalbandian

Nish is a self-taught photographer who picked up his first DSLR in 2007, and has only been shooting professionally since 2011. He shot mostly travel and adventure when first starting, but in 2013 decided to focus on larger issues of the human condition, including conflict. While Nish does cover breaking news, he is more interested in following stories for a longer amount of time and creating stories that dig deeper. He is drawn by the desire to see and understand the lives of people living in their own communities far from his own.

Here’s what he carries while covering conflicts all around the globe. 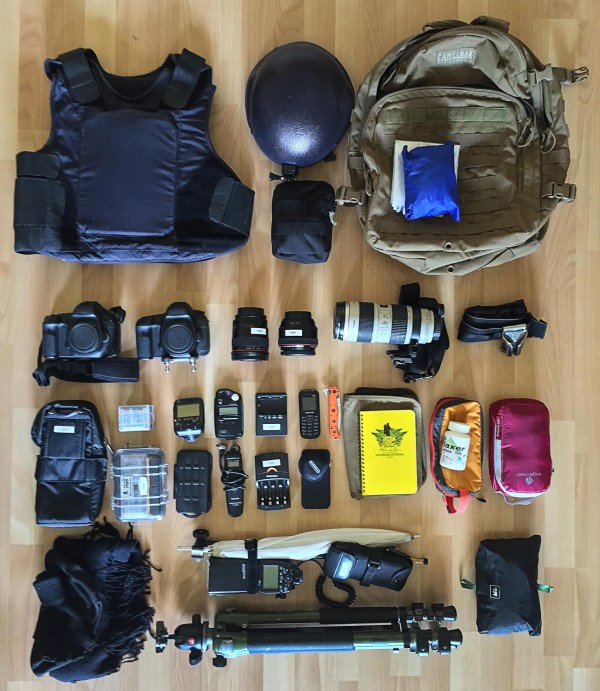 1. Second Chance Level III-A Vest with Ceramic Rifle Plates. The vest and plates work together to make a level IV system. I chose this system because it fits underneath a jacket or sweatshirt. While it does not provide as much coverage as the bigger vests, generally people cannot tell you are wearing it, making you less of a target.
2. Ballistic Helmet.
3. Med Kit with Celox Bandages and Tourniquet
4. Camelback Molle Backpack with rain cover and plastic bags to cover cameras.

1. Think Tank Flash Pouch for 2-6 below
2. Pelican case with 6 Mk III batteries and several sets of AA Batteries
3. Remote Flash Trigger
4. Waterproof case for extra cards (lots of them)
5. Light meter. I use this as much as I can when shooting portraits.
6. Intervalometer — I love timelapses
7. Chargers for AA and Mk III batteries
8. Burner phone (turned off, no iPhone for security reasons). I keep this and a burner wallet with a few bucks in it and an old driver’s licence in my front pocket.
9. iPod with headphones. To chill out at night.
10. Pocketknife. Absolutely necessary. Always in my pocket.
11. Case with documents, copies, press credentials, notebooks and pens. I always take laminated copies of my passport and hand those over when at all possible.
12. Toilet kit including wet naps, Gold Bond Powder, Big bottle of Ciproflaxin (diarrhea will keep you down. Take it when you first get loose and you’re fine.)
13. Bag with extra underwear and socks. I can last for weeks in the same clothes as long as I can change my underwear and socks.

1. Scarf, Hat, Gloves… I just bring a black scarf… I know it’s not as ‘cool’ as the checkered ones….
2. Light kit: Canon Speedlight 600, external battery pack, Manfrotto lightstand extender, and shoot-through umbrella with mount. I use this as my portrait kit. It doesn’t weight much, and I can use it to get great looking off camera lighting fast and easy.
3. Tripod and head. This is an old Manfrotto tripod that has literally been all over the world with me, used and abused. It straps onto the side of the pack.
4. Camp Towel. So if I do get a chance to wash up I can dry off. Also useable as a pillow. Dries quick because it’s microfiber. 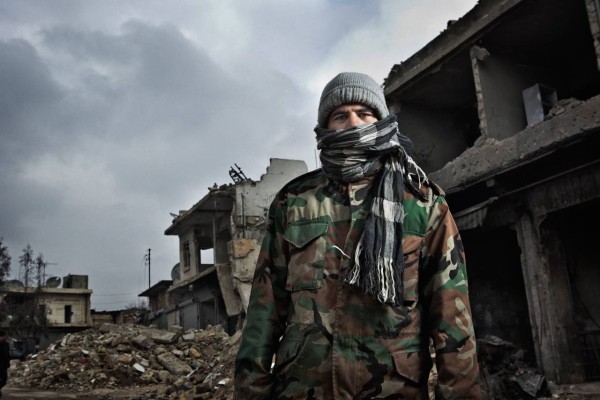 A Syrian man poses for a portrait on February 8 in the rubble of buildings in Azaz, Syria which were destroyed by a government airstrike last year.
Photo: Nish Nalbandian

1. Irridium Satellite phone for daily checkins.
2. Macbook air (erased completely, nothing on it except for pictures)
3. Toughtek DUO mini RAID system (I keep my data on my cards, and backed up onto the RAID each night)
4. Pull-on boots. I hate taking time to have to unlace and re-lace my boots each time I go into someone’s house, so I buy nice pull on boots for quick exits.
5. Gaffer’s tape. This is one of the most necessary pieces of gear you can carry. It will fix almost anything, is reusable, and has replaced duct tape for me.

All of it fits in the bag so I can leave the hotel and go for a week with everything I need. I transport it between hotels/countries with clothes and personal gear and tripods in a duffel and camera gear in a pelican case.

Tagged
Syria Ambassadors
What did you think of this story?
Meh
Good
Awesome

I’m a Professional Road Tripper. Here’s What I Never Leave Home Without.
The Ultimate Food Tour of New Haven, the Birthplace of American Pizza
Skip Marfa for These True Small Town Texas Experiences
This Historic Castle Distillery Is the Best Place To Drink in Kentucky Bourbon Country
The Truth About Artificial Vanilla Extract (and Why You Should Always Splurge for Pure)