Rosetta World™ allows you to play with your newly acquired language skills. Literally. You can play games, engage in chats, and other activities to help you apply your knowledge in everyday situations.

Rosetta World ™ provides three modules – Solo, Duo, and Simbio. In Solo mode, you get to play games by yourself in your new language (in my case, Swedish). Duo mode means you get to play against another player, and in Simbio, you’ll actually share your native language (in my case, English) with other members and take turns helping each other out. TOTALe’s dashboard is intuitive and so accessing a particular Rosetta World ™ mode was just a click away.

I had two game options available to me: Mengo and Gambo. Opted for Mengo since it kind of reminded me of mango, plus I couldn’t access Gambo anyways because I hadn’t reached a crucial learning milestone.

The goal of the game was to flip two cards over, find pictures and their matching words or phrases. The game seemed impossible to win or even get into since each time you flipped two cards that didn’t match, it kept saying you were wrong.

If there was some hidden sequence or way of figuring it out besides flipping two random cards, as a Solo player, I didn’t get it right away (read more on Duo mode below).

A cool aspect of the game was the fact that the words were read out in the language you were learning so, in a sense, you kept learning whether you got the concept of the game or not. 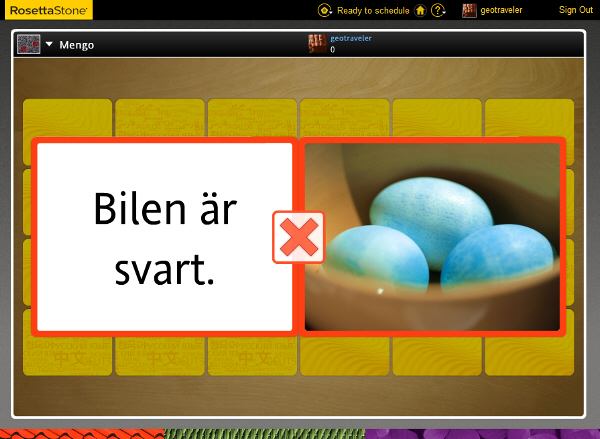 In Duo mode, there were a lot more gaming options. World ™ lets you know how many people are available online to play with and you can also “Find partners” as well. Like Solo mode, some games are in lockdown until you’ve reach certain milestones.

Finding a partner to play with took two days, mostly because Swedish isn’t a popular language but I was finally able to connect with Oleg, another native English speaker learning Swedish. We first played Nimba, a word matching game, but quickly tired of it and moved on to the picture games of Tingo and Mengo. 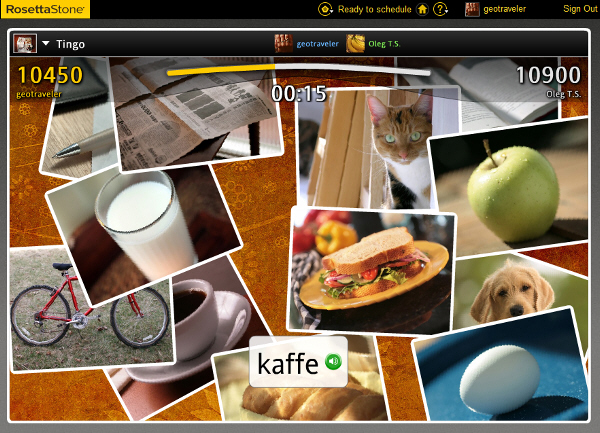 This was where Rosetta World ™ truly shined.

Once Oleg and I got into the games which required mental mapping and matching pictures with words and phrases, our competitive juices began to flow.

I smoked Oleg while playing Tingo which required quick fingers, matching pictures to words, while Oleg left me in the dust while playing Mengo – the same flipping-of-cards game I didn’t get under Solo mode.

And I finally understood how Mengo worked after playing with a real partner. 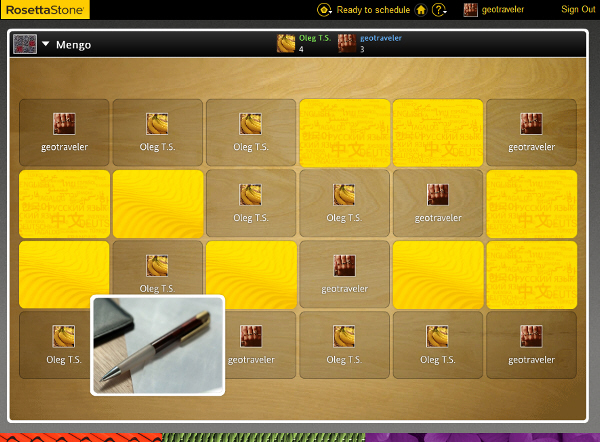 Once we were done, I found a way of instantly messaging Oleg using the Connections manager to say thanks for playing, including asking if he was up for one more round of Mengo for the road – which he subsequently won. 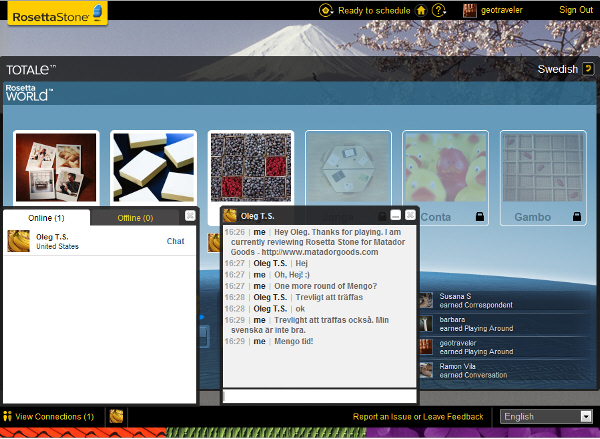 Simbio mode is when you get a chance to teach others your native language (English) by speaking with them while they teach you theirs as well (Swedish). Since most Swedes already speak English pretty fluently, my Simbio mode had “0 People” available for me to chat with.

I wasn’t able to find a Swedish partner to verbally engage with mostly because of the time difference and because there weren’t too many students studying Swedish so I really couldn’t test Simbio like I wanted to.

But if it’s anything like Studio where I actually got to speak with a live person, I probably would have really liked it.

Advice from Rosetta’s Intro Slide –
“Avoid sharing personal information. This is not a networking or dating site.”

So Solo mode didn’t really work for me, but once I got into Duo mode, I was re-energized because of the one-on-one interaction with another player.

With Duo, I could easily spend hours just playing games with someone else.

After hours of reviewing TOTALe, an extremely high quality and dynamic product, where it clearly excelled was when there was some real life interaction with someone else. Rosetta Studio is rock solid as is the Duo play mode in Rosetta World.

Like I mentioned in Review 2 of Rosetta Studio, if some of the interactive aspects of the program could be packaged separately, then the pricing structure won’t be a big issue for potential customers.

If you truly are serious about learning a new language while also remotely immersing yourself in the language with native speakers, I highly recommend Rosetta Stone TOTALe.

The entire program costs $1,199 per year and this includes unlimited online access to the three modules outlined above and an accompanying audio kit to use offline for learning the courses.