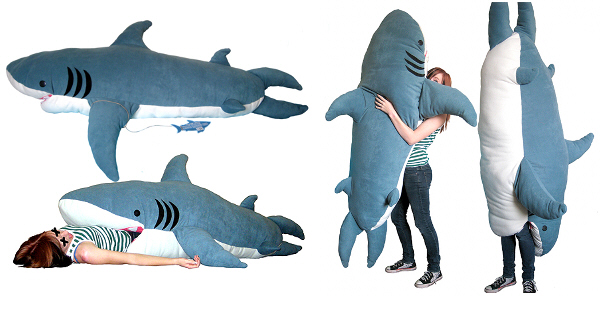 Recreate your very own scene from JAWS right at home…

Measuring in at 7 feet long comes the latest breakthrough in sleeping bag technology called the ChumBuddy. Hand crafted with care using soft fleece fabric and 30 lbs of poly fill material, this bag also doubles up as a plush stuffed toy for kids.

In an effort to make sharks (a very misunderstood animal that also happens to be one of my favorites) more cuddly, I designed and produced a prototype for the ChumBuddy.

So do you think this is an ingenious idea?

What child wants this? No offense to the creator, as it’s an ingenious design, but we repeat: what child wants this? Kids have enough problems being afraid of the dark (there was even a SNICK show dedicated to this subject matter), so we can’t imagine there’s a kid out there begging their parents for the sleeping bag that will devour them in their sleep.

That said, if such a kid does exist (and we hope he doesn’t), make sure he gets this “Chumbuddy” – he’s not someone you want to cross. (via Patch Together)

And what do I think?

Anything that reminds me I’m merely flesh and bones that can be gobbled up by an animal just like I tear into grilled chicken churns my stomach…pun intended.

For more wacky creations, check out: