Between working on globetrotting shows and wanderlust-inducing series for the History Channel, Discovery Channel, and Travel Channel, TV producer Alex Jouve gives Matador a peek into his backpack.

On a number of occasions, especially on a 130 degree day under the Egyptian sun, I’ve been asked by fellow crew members why I always have my bulky backpack stuck to me and what could possibly in there.

Well, some of the items usually in there include…

Purchased in 2008, this HD camera is perhaps the smallest 3CCD camera out there. Tiny and great picture quality for a camera that size.

With an audio input to plug in a wireless microphone, you’re quickly up and running to shoot any kind of independent project.

Purchased as an afterthought on the recommendation of a friend, this device is great for back up audio, but ideal for recording any live music and capturing local flavor to create a soundtrack for any independent documentary project.

I lent it to a friend headed to Cuba once and long story short, I’m currently helping promote an upstart Cuban music record label of some super talented musicians from Viñales in the Pinar del Rio province.

This camera literally goes anywhere and always gets you some extra shots you can never get with any other camera. Amazing little toy that shoots full HD and also provides for some fun behind the scenes moments on a long day.

I used to be a proud PC owner, but when my last one mysteriously died on me and I needed something new to start editing a personal documentary project, I went Mac and have never looked back.

The 4 GB of RAM are a nice feature to be able to edit video and multi-task like crazy. If I had done all the work from the last year on a PC, I would probably be on my 3rd one by now.

An insane amount of receipts…

Working on a variety of series for the History Channel, the Discovery Channel and the Travel Channel, I am always traveling and managing the budget and expenses of an international television production crew.

After a month on the road in 5 countries, it starts adding up. The fun part is always trying to figure out what a small crumpled up receipt in Greek or Russian is for a month later. Where were we and what were we doing that day again?…

You can never let a hangover on your down day or some super tasty spicy food ruin a good trip or shoot… which brings me to the last item [toilet paper], which is just silly to not have handy wherever you go, as well as some hand sanitizer too come to think of it. 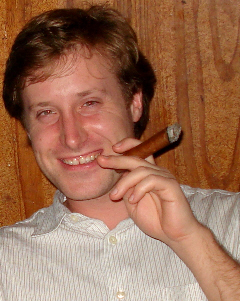 Alex is a freelance TV producer working in documentary television, most recently with the History Channel and the Discovery Channel on series such as “Digging For The Truth”, “Treasure Quest” and “Solving History with Olly Steeds”.

He has shot on four continents in over 13 countries in the last 4 years.

Recently he has also been working a personal documentary project as well as trying his hand at the music business by helping promote Valle Son — a super talented traditional son and classic salsa band from Cuba.

The optimal road trip to see all the US national parks, mapped
How to get around Miami like a pro, according to a local
7 luxurious airport hotels that’ll make you forget you’re right next to the runway
An overnight train is the best way to experience Canada’s winter wilderness
Stay at these 8 haunted Airbnbs for a truly terrifying Halloween night

Could virtual windows in airplane cabins be the future of aviation?