Recently receiving the Lowell Thomas Award as the “2010 Travel Journalist of the Year”, Andrew McCarthy’s work has appeared in Travel + Leisure, National Geographic Traveler, AFAR, The Atlantic, Bon Appetit, and many major publications.

And if Andrew looks quite familiar, check out his acting portfolio. Rest assured, you’ve seen him before.

I use a small Victorinox shoulder/computer bag for all my valuable stuff.

I have an old 12-inch Mac power-book. They don’t make them anymore. It’s a dinosaur. It’s battered and beaten but I have no intention of swapping it out till it falls apart (I back up often).

I carry a tin of Rescue Remedy Pastilles for stress relief— I’m not a great flyer. Who knows if they work, but they’re pretty tasty.

I always have a paperback novel handy (I’m just not loving reading from the kindle). When I’m traveling, I like a good plot. They’re easy to pick up and slip right into. Lately, I’ve been digging into Raymond Chandler again.

I like to carry a bag of almonds whenever I can; a little protein often helps clear the brain.

I always use the small soft-cover Moleskin Cahier notepads, they can be pretty invisible and slip into any pocket. They have a handy pocket in the back for receipts, loose notes, or cards. 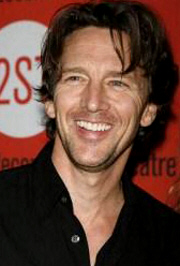 Andrew McCarthy is a two-time Lowell Thomas Award winner, including being named the 2010 Travel Journalist of the Year. He has twice been cited for “notable” work in the Best American Travel series, and is a contributing editor at National Geographic Traveler.