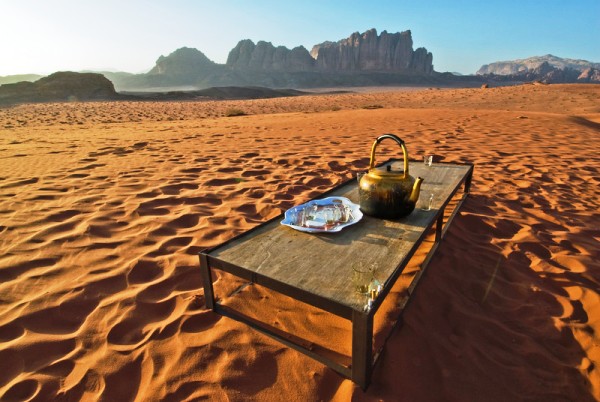 Photographs courtesy of Everything Everywhere

The perpetual nomad being the widely popular blog, Everything Everywhere, Gary Arndt has been traveling nonstop since March 2007. His global adventures have taken through 70+ countries so far, including 23 countries in Australasia/Oceania alone, and he shows no signs of slowing down any time soon.

This is by far most useful thing I have on me. It is just behind my wallet and passport in importance.

It serves as my watch, music player, communication tool, photo album, notepad, and much more. I spend a lot of time on trains and eating – listening to podcasts and audiobooks.

One of the first things I want to do when I get back to the US is to get an iPhone so I can take advantage of the other features the iPhone offers.

I’ve spent 2.5 years traveling around the world and I’ve had only 4 pairs of underwear. These really are amazing. Easy to clean and they take a beating. They also double as my swimming trunks.

I have used 3 pairs of travel pants. The Mountain Hardware convertibles were the first ones I purchased and are the ones I’m still wearing. Though almost worn out, they’ve lasted longer and have been more rugged than anything else I’ve used.

I do a lot of photography while traveling. I have taken over 50,000 photos with my D200 since the start of my trip.

While I’m probably ready to upgrade at this point, this camera has served me well. The 18-200mm VR lens is also a great all purpose lens if you are trying to travel light.

You can’t really do serious video/photo editing from internet cafes. You have to have your own laptop. Though an heavy item, it has been well worth it. I’ve saved a lot from not having to use internet cafes plus it enables me to blog and use Photoshop no matter where I am. With this you also need to carry a cable lock for safety reasons.

No matter where you go, it will probably get cold at some point. The simplest, lightest item you can carry with you for cold weather is a hat. I’ve used it in places you don’t normally think of as cold such as Hawaii and Easter Island.

Unless it is really cold, I always wear sandals. I started my trip with a pair of Cachos and ended up with a pair of Tevas. Not having to wear (read “wash”) socks is very handy. 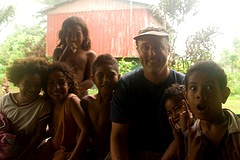 Gary with village kids on Rennell
in the Solomon Islands.

The idea of traveling around the world wasn’t something that gradually dawned on me. It all rather happened in an instant. Once I had the idea, I knew it was something I had to do. That happened about two years before I left on my trip.