Over the last 5 years, Jenny M. Buccos, Director, Producer, and Founder of ProjectExplorer.org, has been traveling between 19 countries for film and multimedia productions. She shares the contents of her backpack with Matador below.

While I’m in the process of upgrading to an SLR, this camera will continue to travel with me for one reason – NightShot, which allows for shooting in complete darkness via infrared light (think night vision goggles!).

I also love the wide angle lens for this camera, and its rapid fire shooting feature. For those not ready for an SLR, or who want to travel lighter, I think this is the perfect “in between” camera.

I’m a video editing fanatic and love to cut “quicktrips” for our student audience. I’ve loaded my Macbook with Final Cut Express for fast editing whilst on location, and this little guy is light and easy to take wherever.

It also keeps me in touch with family and friends on the road and at home with Skype, a magical program that shrinks the planet. I love this computer so much that I even have a spare at the office in the off chance one dies on the road.

I’m all about creating “video postcards” for friends and family while I traveling, and an HD Flip camera with a mini-tripod makes simple video capturing a breeze.

While not exactly cheap, it’s a lot less expensive than my pro cameras, and lets me do crazy things like throw it in a plastic bag and float it in a river, or hand off to a stranger to get an action shot of me. (See the video friends shot of me bungee jumping in Soweto, South Africa).

I also recently got a GoPro HD Hero camera, which is even better for getting exciting – and difficult – shots. I can suction cup this to the window of a train and get time lapse of the landscape, strap it to a helmet and get a great POV while skydiving, and even take it snorkeling to get sea creatures up close. It’s powerful and practically indestructible.

Let’s face it – I’m addicted! Not only can I get email anywhere on the planet, Blackberry Messenger helps me stay in touch with friends around the world without the cost of international text messages.

The address book is full of all the fantastic people I’ve met so that no matter where I might have a layover, there’s always someone to take to lunch.

Rosebud Salve and a back-up pair of sunglasses

Hey, a female filmmaker also has to look great. Those big glasses conceal my total lack of sleep when working on location. Pair the glasses with a smear of Rosebud Salve on my lips and I am ready for a quick photo even on my worst of days.

The business cards are a must – I never know who I’ll meet. The rest are must-have items on any shoot: to take notes about time codes, sketch out shots, hold down wayward cords, and even cinch back my presenters’ clothes so they look great on camera! 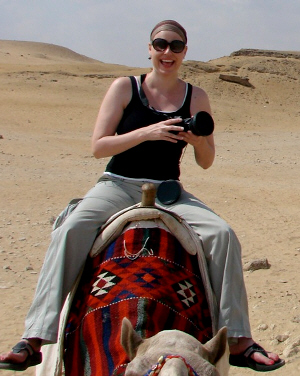 Jenny M. Buccos, the Director, Producer, and Founder of ProjectExplorer.org, has spent the last 5 years traveling between 19 countries for film and multimedia productions.

In 2003, Jenny founded ProjectExplorer.org as a way to educate youth about the world’s cultures, histories, and people through video, photos, blogs, and other multimedia.

In 2007-2008 she directed and produced a series in South Africa which included an interview with Nobel Laureate Archbishop Desmond Tutu.

To date, she has directed and produced more than 200 short videos for children and teens.

She is currently in post-production on her 4th series – Mexico!

In 2009, Jenny received a GOLD Parents’ Choice Award for Excellence in Educational Programming.

When not on location, Jenny barely leaves the island of Manhattan, preferring the wilds of Hell’s Kitchen (Times Square West) to those of the outer boroughs.