Leif Pettersen hanging in a hammock in Ko Chang, Thailand

Leif Pettersen (pronounced “Life”) is a road-worn wordsmith who has worked in the travel writing racket for nearly a decade.

Known for his hilariously irreverent style, Leif’s candid travelogues are enjoyed by thousands each month on his blog Killing Batteries.

With five Lonely Planet guidebooks, numerous published articles, and 47 countries under his belt, Matador caught up with Leif before leaving for his next adventure to Nicaragua.

First off, I always take a jacket with a jillion pockets – If weather allows for it, I bring my pocket-festooned jacket and use it in place of a day bag.

Not only is stuffing the pockets far less inviting to potential thieves than an easily grabable day bag, but this way my hands are completely free to hold chocolate.

I coveted the super slick Scottevest jackets, but I settled for the Lands’ End jacket, which was about one quarter the price and had all the pockets I needed.

When it’s too warm for jackets, I use my sexy Ful messenger bag.

After three years of devout dedication to my Blackberry (and its incredibly handy ‘UMA’ wi-fi calling feature, which allows you to make calls to phone number(s) in your home country without incurring international roaming charges), I recently switched to the Google G2 Android phone.

The number of free apps available for Android phones is simply insane and the G2 also has the all-important wi-fi calling feature.

The voice-to-text feature is priceless for taking quick “notes” while on the go. And, of course, it performs well as a still/video camera and MP3 player.

Research trips tend to be pretty exhausting. These little packets of powdered wonderfulness are my secret weapons for staying healthy, sharp and awake.

They weigh almost nothing and take a fraction of the time to prepare and drink than a cup of coffee.

Also, the vitamin bomb and electrolytes in the Trace Minerals will greatly reduce suffering on those occasions when someone slips six glasses of wine into your hand.

I just bought my first netbook and as soon as I find a doctor who will perform the procedure, I’m planning to have it fused to my body. I’ve been using a Palm Pilot Tungsten T5 for six years.

It did everything I needed for research trips, but the super slow tapping with the stylus was always a pain. I bought the Asus Eee 1015PEM for the ridiculously long battery life, 250GB hard drive and because it’s just plain sexy.

This is also a recent purchase. I got the Kindle for the usual sexy space-saving reasons, but the kicker is the totally free 3G data service available in over 100 countries.

The web browser is incredibly basic, but nevertheless this baby is going to save me the usual world of hurt when I’m in Tuscany, where wi-fi availability is sporadic and expensive.

These are not sexy, but I’m a light sleeper so I’ve had to surrender a little sexiness for a good night’s sleep. I use these things pretty much every night when I’m on the road, whether I’m on a plane, in a hostel dorm room or (in) a five-star suite.

The silicon earplugs are more expensive and don’t last nearly as long as foam earplugs, but they’re far more effective, so the extra expense is totally worth it.

Obviously, I carry a lot of expensive, sexy tech. I keep it all safe with a pair of Defcon 1 Ultra mobile alarms. They’re small, light and though they won’t defeat an especially daring thief, they’re wonderful deterrents.

They can secure all manner of bags and laptops and, for the truly paranoid, they have super sensitive motion sensors. No one will touch your bag, accidentally or on purpose, twice. 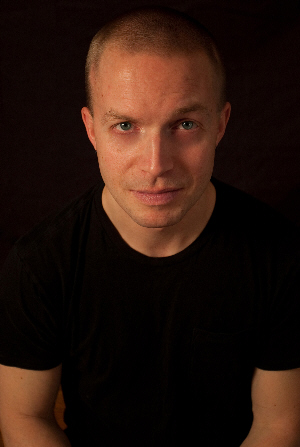 Leif’s writing career began by happy accident in 2003 when he jumped ship from his day job at the Federal Reserve to take a traveling sabbatical.

Along the way he began chronicling his experiences on his travelogue LeifPettersen.com and later on his blog Killing Batteries, which steadily gained a cult following and has become a jumping point for other creative endeavors.

Though Leif has been all over the world, his area of expertise is travel in Eastern Europe and Tuscany (the subjects of his contributions to the Lonely Planet guidebook series).

He has also been featured in scores of magazines and websites, including Global Traveler and MSN.

Peek into more backpacks in our What’s In Your Backpack series.