View all travel news
Top Destinations
Top CitiesView All Destinations
Trending Regions
Trending Cities
Load More
Kickstarter, and other crowd-funding websites, offer new ways for creative projects to find funding. Lest you think the road is paved with easy money, here are 10 important questions to ask before you begin.

HOW COULD THE CLIMATE CRISIS be seen as a great love story? This is the question asked by the documentary currently in production, Evolve Love. As Associate Producer, I strategized with the film’s director Velcrow Ripper last November, as we planned what would be our first Kickstarter campaign.

Three weeks later, with $27,000 pledged, Velcrow recorded himself before the entrance to the Cancun summit, dedicating the moment to the 208 backers that stepped up to successfully fund the campaign. “I’m here thanks to you,” he declared.

How did we do it? Through an alchemy of intuition, luck, social media, and generosity, projects like ours and thousands others are participating in the emerging phenomenon of “crowd-funding.” Kickstarter.com was one of the first, and currently most well-known hubs for this new movement, though many others are sprouting up.

Perhaps you’re thinking of embarking on your own campaign to raise funds for your album, film, or book? Lest you think the road is paved with easy money, I’ve collected wisdom from our Evolve Love campaign and many others into these 10 important questions to consider before you begin.

1. Do I need the entire budget or would partial funds still help?

With Kickstarter, you need to raise your entire funding goal, or you lose it all. While it sounds harsh, the logic is understandable. If you’re attempting to make a $100K film, could you do the same project with $30K? Unlikely. This also protects donors from losing money to projects with incomplete funds.

That said, if you truly need any dollars you can get, consider lowering your funding goal, or using a site like Indiegogo, which releases the funds as they’re donated, rather than holding out for the end.

2. Do I know exactly how the money will be spent?

Donors do not want their money disappearing into a black hole, or feel they’re financing your personal rent for the month. Be very specific – even so far as to publish a basic budget breakdown. How much for music? How much for production? And how far will this round of funding actually take your film, album, or creative project – another step further or right to the end?

3. Do I have an existing fan base or network to spread the word?

Kevin Costner lied: if you build it, that doesn’t mean they’ll come. Having an existing fan base or network of people that can get the ball rolling is extremely important. If you’re an indie creative artist or filmmaker, create a Facebook page for your project and begin gathering fans asap – ideally 6 months or more before you actually launch your campaign.

If you do not have an existing fan base, think of who you can approach that has similar goals. If you’re making a documentary about Burma, find Burma support groups around the world that could help spread the word to their own networks, and (hopefully) kick in some money. If you’re creating a art project about Japanese manga, tap into online fan sites that may interview you about the project and help spread the word.

4. Do I know why this project matters?

Sure, it may be your life dream to record your first album. But that doesn’t mean the public will open their wallets. How does your project tap into a larger issue in society? For example, with Evolve Love, our specific goal was to make enough money to film at the Cancun Climate Summit – but on the macro level, we were the eyes and ears on the ground, capturing an important perspective in the battle against global warming.

Likewise, the CouchSurfing documentary campaign was about more than freeloaders on couches. In their own words: “Surfing people’s couches is not just a free place to stay for travelers. This documentary seeks to show the world how everyday people like us can use CouchSurfing to change our lives!” By supporting your project, the donors are able to co-create a more open and generous society.

5. Do I know what unique rewards I can offer my donors?

Every Kickstarter campaign needs rewards. These are tied to every tier of your donations. For example, a common reward for the $10-25 range is a copy of the album, book, or film once it’s released. The rewards get much more creative (and often personal) as the scale rises.

For example, on Evolve Love, we offered everything from Skype Tarot readings with Velcrow Ripper, the film’s director, downloadable interviews from his previous films, tickets to the film’s after-party, and even the opportunity to come on a shoot. Other projects like the “Temple of Transition” at this year’s Burning Man offered stamped Dogtags, bandanas, and even a hip flask with the Temples logo etched on the surface.

Rule of the thumb for rewards: be unique, but be careful what you offer – you may just have to fulfill them. Digital products are easier (and less costly) than physical ones. Most people will donate in the common tiers: $25, $50, $75, and $100 – but don’t let that stop you from adding major options for those angel investors.

6. Is there a sense of urgency to the deadline?

Research has shown that the optimal length of a crowd funding campaign is 30-45 days. Too short a time frame and you risk not being able to build enough momentum. Too long and your fans and potential funders lose interest. A Kickstarter campaign should not be used to gather incremental ongoing donations for your project. It is more effective to build quick infusions of cash around specific aspects of your project.

For example: if you’re a filmmaker and you need $100K to fund your complete film, you’re unlikely to make that amount unless you have seriously flush friends. Instead, focus on the $10-15K you need for a portion of your film, as you continue building fans and finding funding in other sources. As shown in the graphic below, the vast majority of successful Kickstarter projects have goals between $1-5K. 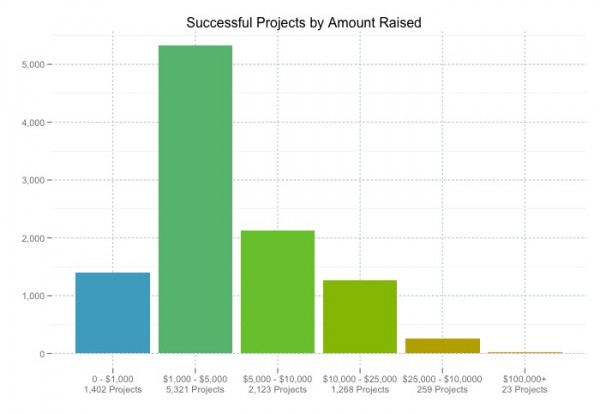 7. Have I shot a great pitch video?

This is non-negotiable. Even Kickstarter themselves say “There are few things more important to a quality Kickstarter project than video. Skipping this step will do a serious disservice to your project.” It’s not about being perfect, it’s about connecting on a personal level with your potential donors.

Your project will also dictate the style of pitch video. For musicians, you could post a live music video, like my friends Steel Audrey did for their campaign.

For filmmakers, an obvious choice is your teaser trailer, like this one from Bicycle City, a film about the impact of bicycles on the small town of Rivas, Nicaragua.

It’s also a great idea to include a personal message from yourself, or other members connected to the project.

Kickstarter processes their funds through Amazon Payments, which in turn, dictates that you need a US-based bank account. If you’re not a US citizen, you have a few options: asking an American friend to link their account to your project (for obvious reasons, make sure you can trust them). If you’re project is tied with a US charity or business, you may be able to go that route.

If you’d rather not deal with those hoops, your other option is to use Indiegogo.com – they processes funds via Paypal, which works in most countries around the world.

9. Am I prepared to annoy my friends and colleagues for the duration of the campaign?

A successful Kickstarter campaign demands effort. If you think you can post your campaign, kick back and let the money roll in, you’ll be sadly disappointed. During the 3 weeks of the Evolve Love campaign, it felt like producing an actual film tour, as we sent constant emails, posted updates, and reached out to supporters.

Your own Facebook friends are an obvious network to continuously remind and encourage to help spread the word. But even they will forget without constant reminders as they go about their daily lives. From the outset of your campaign, warn your friends that for the next X days, you will be sharing your project. Then once your campaign is over, offer sincere gratitude for not de-friending you.

10. Have I been funding other Kickstarter projects?

What goes around comes around, especially in this brave new world of co-creative crowd funding. Before you wade into the realm and ask strangers for money, ask yourself, how have I been supporting this movement? In the circle of support, you need more than takers.

For example, I’ve personally donated to 12 other projects on Kickstarter (11 were successful), and 6 on Indiegogo. I like to think that every project is a chance to create the world we want – so whether you’re concerned about food and sustainability, human rights or independent film, there are creators with projects that need your money.