MY HUSBAND ZDRAVKO, a newly minted Canadian citizen born and bred in Belgrade, was shocked at how clear and specific my wedding vision was.

Serbs, I learned, generally don’t engage in the wedding fantasy that many Canadian women do, indulging in bridezilla-oriented reality television and magazines. In fact, it was only minutes after his romantic proposal on a quiet beach in the Dominican that I started pitching my Serbian Wedding proposal.

Zdravko was amused that the words “dream wedding” and “Serbia” were in the same sentence. He was also easily swayed by my arguments because it meant that his entire family would be able to attend without having to apply for Canadian tourist visas or paying exorbitant amounts of dinars for airfare.

By the end of our discussion, he was actually moved by my generosity and willingness to embrace his culture.

There is no dress frenzy. Rather than spending thousands of dollars on a dress you only get to wear once, Serbian brides simply rent one for a fraction of the cost. Brilliant, huh?

Unfortunately, I had no time to get this done in the week leading up to the event so I needed to find one before leaving Toronto. I found a girl identical to my height and size on Craigslist selling a barely-used, silk, ivory, strapless Pronovias dress for a reasonable $400 (can’t believe she paid over $2000 originally, plus alterations). DEAL!

Bruno, the International Man of Honour

Bruno, a traveling buddy from São Paulo I met in a Bolivian hostel a few years back, kindly agreed to be my kum (best man) as he had planned to be in Eastern Europe at the same time. 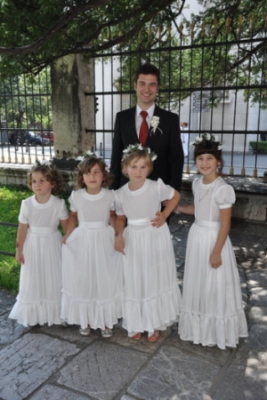 Brazilians are a relatively rare occurrence in Serbia outside of televised sports, which probably explains why my new family was so surprised when he arrived bearing zero resemblance to Ronaldinho. Tall, charming, multilingual, and with telenovela good looks, Bruno added smiles and a few blushes on the faces of my female in-laws while inducing a rapid enhancement of their proficiency in English.

Bruno to me is like Pippa to Kate, a surprise scene-stealer in the big moment. My mother-in-law, no doubt also influenced by the joy in England only months before, made the parallel even clearer by recruiting four flower girls to accompany us in the wedding.

Pre-wedding festivities in Serbia are radically different from the North American blitz of engagement parties, bridal showers, bachelorettes, spa days, and hair and makeup trials. There is little doting over brides in the days preceding (or even the day of) the wedding.

After several days of hard drinking and dancing in Belgrade’s numerous bars, cafes, and splavs (floating nightclubs), I found myself on my last day of singledom sitting in a small café with my sister-in-law, Aleksandra. Chain-smoking and pounding back vodka, she offered me a few words of Serbian-style encouragement:

“Are you nervous for tomorrow?”

I insisted that the wedding take place in Belgrade’s Saborna Crkva, the cathedral in which Serbian King Peter was crowned in 1904. The Saborna is located conveniently in the Stari Grad, or old city of Belgrade, a cobblestoned area rife with photographic opportunities.

The cathedral is simple on the outside; a grey, classically styled exterior belies a lavish spectacle of oil-painted iconography and Byzantine majesty on the inside. 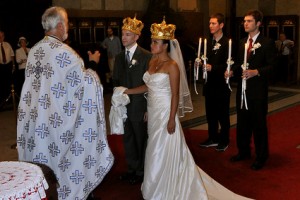 The bride and groom

This sense of majesty is extended even further in the symbolic crowning common to all Orthodox wedding ceremonies. The typical Saborna Crkva wedding involves large golden crowns.

My princess-excitement hit full throttle as the chanting priest crowned me and we walked around the cathedral, my train floating happily behind. I had no idea what the hell the choir was singing or what the Orthodox priest was asking me, but I felt pretty spectacular with a big-ass crown on my head.

The reception took place at a restaurant in Zemun, a historic area of Belgrade located on the Danube River. With its large windows facing the river, the dining room needed little else but an arch of white flowers and simple centerpieces to create a festive scene.

This brings me to yet another difference between North American and Serbian wedding traditions: absent is the obscene “once in a lifetime” money-spending on tabletop decor, vintage-inspired Etsy finds, gourmet hors d’oeurves, photobooths, and commemorative take-home junk for guests.

I was on-the-floor drunk by the time the cake arrived, two giant firecrackers blazing out of its sides.

The kolo dancing and drinking started long before dinner was served, and continued relentlessly throughout the dinner service. I was on-the-floor drunk by the time the cake arrived, two giant firecrackers blazing out of its sides. My shoes and fake eyelashes disappeared by the time the Gypsies showed up with their trumpets.

I danced on a chair in a very un-princess-bride-like fashion as the live band played ABBA covers. The Miracle Bra I purchased at Victoria’s Secret popped daringly out of my dancing dress, which I constantly adjusted like a prom queen.

As the last guests left, Bruno and I sipped gin and exchanged drunken Spanish dialogue ¿Donde están mis pantalones? ¿Donde está mi bicicleta? Loaded down with bags of leftover cake and meat, we were driven back to my husband’s family’s apartment in downtown Belgrade.

I was determined to join the after party on the streets of Belgrade with Bruno and Aleksandra but passed out in a drunken stupor instead. Zdravko, remarkably alert and sober, performed his first husbandly duty by wiping away the thick coat of makeup on my face.

[Note: Matador editors selected this Community blog post for publication at the Network.]

Tagged
Travel Belgrade, Serbia
What did you think of this story?
Meh
Good
Awesome