Matador Network Editors Matt Hershberger, Ana Bulnes, and Morgane Croissant selected 9 books (fiction and non-fiction) about love and romance of all kinds. This Valentine’s Day, cozy up on the couch and enjoy the company of good literature.

There’s probably no better Valentine’s book for the broken-hearted than Nick Hornby’s 1995 classic High Fidelity. Rob Fleming is a 30something Londoner who just broke up with his long-time girlfriend. A pop music fanatic, Rob compulsively makes “Desert Island, Top 5” lists of everything, so in the wake of the break-up, he ranks the “Desert Island, Top 5” worst break-ups he’s ever gone through. It’s funny, it’s melancholy, and it’ll make you feel a little better about your failed relationships. There’s also a killer movie adaptation starring John Cusack (the main difference is that one’s set in Chicago). -Matt Hershberger

Love in the Time of Cholera by Gabriel García Márquez

It’s easy to dismiss love stories as corny or naive — let’s be honest, most of them are a bit like that. Our nihilist, intellectual self is not allowed to believe in the idea of true love with a happy ending, much less read about it in a non-ironic way.

Love in the Time of Cholera is perfect because you can extract two opposite conclusions, depending on what you believe (or want to believe). It can be the most beautiful love story you ever read, a tale of love surviving through the decades, overcoming obstacles and reaching a delayed but happy ending; but it can also be read as a joke the author is playing on the reader, disguising obsession as love, a tragic arc as a hopeful story. After all, García Márquez was a genius. If anyone could do that, it was him. -Ana Bulnes

If you like Aziz Ansari’s series Master of None on Netflix, you will love Modern Romance. It is not a mushy love story, but a well-research non-fiction book that digs deep into the intricacies of finding love in age of online dating (yes, there is a chapter on dick pics). It’s hilarious and insightful, and you do not need to be single and looking to find it interesting… both my partner and I read it and thought it fascinating. -Morgane Croissant

Have you ever read Romeo and Juliet and thought, “This needs more sexy insect assassins, and it should be set in space”? Saga is the answer for the millions of people who have thought just that: it’s the story of Hazel, the mixed-race daughter of Alana and Marko, whose species have been fighting each other in a galactic war for as long as anyone can remember. It’s weird, it’s exciting, and it’s occasionally pretty sexy. The art, illustrated by Fiona Staples, sets a new standard for comic books — it’s kind of like Avatar, but with a better story and characters. -Matt Hershberger

It’s difficult to write about this book without using the obvious metaphor “the prose is as smooth as…“, especially because it’s true. Almost as if Alessandro Baricco had that idea in mind when he was creating the story of a 19th century silkworm merchant who travels to Japan again, and again; who falls in love with a woman whose language he cannot understand; who has a wife waiting at home. It’s beautiful and unexpected, and it feels like an ancient tale that has been told over the generations. It’s a short book, so you can read it in just one day. -Ana Bulnes

The Art of Racing in the Rain by Garth Stein

There’s more to love than what happens between two people… What about the relationship we have with our pets? Isn’t that love, too?

The Art of Racing in the Rain is the story of the incredible bound between Enzo (a dog) and Denny (his owner) as told by Enzo at the end of his life. It is a funny, but also deeply moving novel, so whatever the emotion, you’ll be sure to shed a few tears. All pet owners should read this beautiful book this Valentine’s Day to celebrate the furry creatures in their lives who provide them with unfaltering love daily. -Morgane Croissant

The Pillars of the Earth by Ken Follett

Okay, this is a long one — you’re probably not going to read it in a day. But Ken Follett’s book about a monk trying to build a church in 12th century England is way more romantic than you’d think, and is gripping enough to make you skip Valentine’s week altogether. It’s an epic that stretches over several generations (it took a really long time to build a church in the 12th century), and it’s got everything you could possibly want — romance, political intrigue, travels to distant lands, and king spankings. -Matt Hershberger

The Passion by Jeanette Winterson

This is the story of Henri, a French village boy who becomes a soldier and Napoleon’s personal waiter, and Villanelle, who is the daughter of a Venetian boatman, has webbed feet, and whose heart was gambled away by her husband. Literally — or maybe not. Magical realism and history intertwine throughout the book, just like Henri and Villanelle’s lives. He wants a classic, simple love story; she wants to love everyone, to remain free, and her heart back. She really wants her heart back. -Ana Bulnes 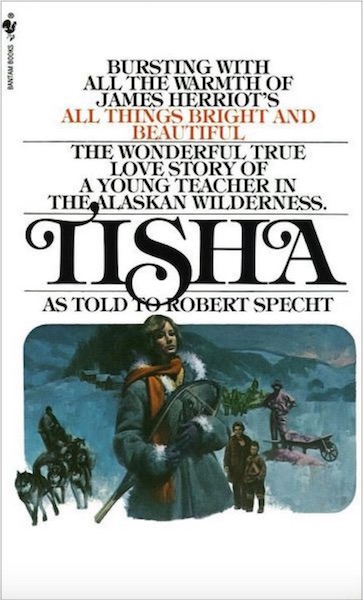 When I was given this book by a couple of friends, I did not have high expectations: the illustration on the front cover looked old-fashioned (you be the judge) and the blurb was corny. Well, I was wrong because once I started reading, I could not put this book down. Conclusion: never judge a book by its cover… I feel like I should have known that!

Robert Specht tells the true story of Anne Hobbs, a school teacher from Colorado who moved to a very remote part of Alaska in the 1920s. Although this novel is a brilliant documentation of the harsh frontier life, it is also a beautiful love story that defies the conventions of the time. The characters are touching, the story keeps you on your toes, and it touches on feminism, which is always a good thing! -Morgane Croissant

Books7 Books by Women That Will Change the Way You See the World
Tagged
Books
What did you think of this story?
Meh
Good
Awesome