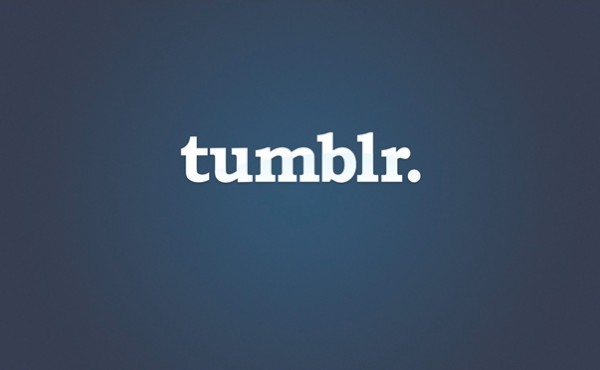 The tips in this article are an excerpt of our social media chapter in the Travel Writing and Travel Photography courses at MatadorU.

THE RANGE OF TOOLS available to help us share travel content with others is large and ever-expanding. Whether you prefer to share your journey via written words, photos, video, or even audio recordings, deciding where and how to share your content can play an important role in how it ultimately gets discovered and shared by others. tumblr, a highly flexible publishing tool that lets you effortlessly share any multimedia format, is an increasingly popular option for travelers and publishers like Matador Network that are looking for a place to share their creative work.

Why should you consider tumblr as an important tool in your publishing arsenal? There are several benefits. First, in addition to allowing you to share virtually any type of multimedia (photos, video, sounds, text, links, chat, and quotes) tumblr offers travelers virtually unlimited options for personalization and customization, from simply using the platform’s pre-made themes to coding your own custom page using tumblr’s publicly available API. Most importantly though, tumblr’s user network numbers nearly 100 million unique blogs and 170 million unique monthly users, meaning any content that’s shared via tumblr is immediately eligible for discovery and re-sharing by a built-in audience hungry for great original work.

How can you utilize the tumblr toolset to its maximum? What are some best practices and tips? We’ve broken it down into the six key steps below to help you get started: 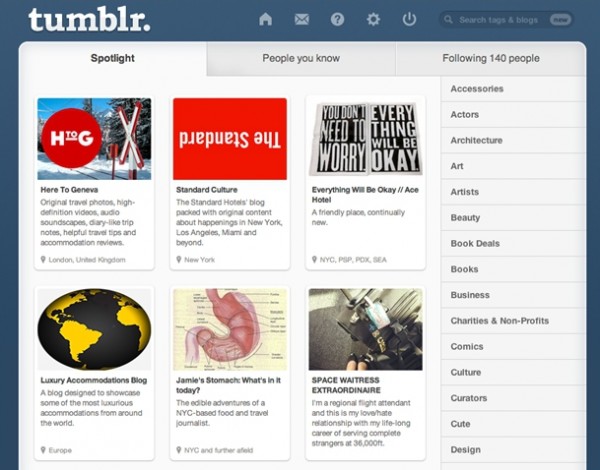 If you’ve ever been curious how other travelers and publishers are using tumblr as a powerful sharing tool, check out the following directories and community resources to get ideas and inspiration:

● tumblr Travel Spotlight – This official directory of travel-themed tumblr content is hand-picked by the tumblr staff. It’s a great cross-sample of the various types of travel content on the platform, from photographers to magazine publishers.
● More Travel Blogs to Follow – Only the best travel blogs make it into the Spotlight; this larger directory, curated by the tumblr community lead (yours truly), provides some additional suggestions of who’s sharing great work, organized by theme.
● Open Travel Community – A dedicated travel news hub featuring notable new members of the tumblr travel community, upcoming events, tips and tricks, and goings-on.
● Best Practices Guide – Case studies showcasing how brands, individuals, and publishers are using tumblr.

Signing up for tumblr is dead simple. Just head to the tumblr homepage to get started. (Fun fact: tumblr requires less personal information to set up an account than any other popular social media network.)

One of the great advantages of tumblr is its infinite flexibility for a range of publishing projects. In fact, it’s helpful to think of tumblr as a website-building tool powered by a social community. You can make extensive modifications to the look and feel of your public facing tumblr page, adding sub-pages and custom designs. You can also add sub-pages and URL redirects to your work elsewhere on the web. Head to the customize section of your account to get started, or use the options below:

● Pick a theme – tumblr offers 1200+ themes to help you customize the look and feel of your presence. Those with the coding skills can even build a custom HTML theme for their page.
● Add sub-pages – Adding sub-pages to your tumblr presence is another great way to further customize with details like an “About Me” section, Bio, Resume, and Contact details. The American Guide is a good example of a travel publisher using pages.
● Add Google Analytics – You can track visitor data on your tumblr presence on pretty much any public website. Data can help you make better decisions about how and what to publish as your project moves forward.
● Public API – Those with more advanced coding skills and a great idea should take a look at tumblr’s publicly available API at an opportunity to hack together just about anything. Check out how new media artist Hyper Geography is using the API.
● Integrate with custom domains – tumblr also allows you to incorporate your blog into another website or using a custom domain. The ACE Hotel and Jetsetter are two brands who are using tumblr to power their website blogging platform. 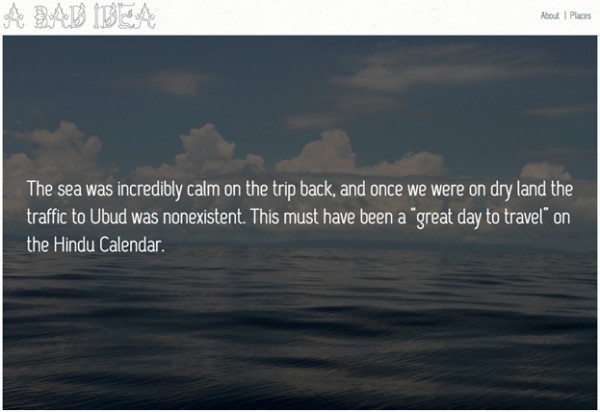 Tumblr user We Had a Bad Idea

4. Think outside the text box.

Not all great stories have to be written. With digital formats like video, audio, GIFs, and imagery at our disposal, there are more opportunities than ever for savvy travelers to re-think the travel narrative. With full support for a range of multimedia formats, tumblr is well-positioned to be your partner in this process. While tumblr does have a great literary community, think about how different multimedia formats could also be used to help you tell better stories. For instance:

● Use GIFs – the GIF is experiencing a renaissance in recent years, and tumblr has become the de facto home of GIF-makers on the web. Check out how Standard Hotels is using GIFs of yoga positions to show off their Miami spa.
● Share images – tumblr is the perfect place to host your photo-portfolio or trip diary. Check out the blog for We Had a Bad Idea and Sebastien Dahl’s Oslo to Beirut project for inspiration of some great photo travelogues. tumblr’s photography community is diverse and constantly growing; check out the Lensblr community and the Photography directory for inspiration on what others are sharing and creating.
● Share Video – tumblr is a great place to host your travel videos. Take a look at the Tiny World project and Vimeo’s page on tumblr for inspiration.
● Share Audio – tumblr is fully integrated with streaming audio services like Soundcloud and Spotify. Think about how you could use sound to help lend a sense of place. Here’s an example of a Soundcloud post of a street musician in the NYC subway.
● Share Quotes – Travel quotes are highly shareable and tumblr has a special post type dedicated specifically to quotes. Check out Travel Quotes for an example.

Now that you’ve thought through your tumblr content strategy, it’s critical you consider how to get it found by tumblr’s network of more than 170 million monthly unique users. There are a couple key features of the network you need to know to maximize that discovery:

● Tag your posts – Tags are the lifeblood of tumblr. Make sure anything you post is appropriately tagged and utilizes the most popular tags on the site. For a list of the most popular tags, check out tumblr’s Explore page. Content topics like landscape photography, history, architecture, animals, and sailing are particularly popular.
● Use tags to create structure – Another great feature of post tags is they can be used later to lend structure and category-specific organization to your page. Check out how Sofitel uses destination tags to help organize their tumblr content.
● Share to other social networks – tumblr makes it easy to link your Facebook and/or Twitter accounts to your tumblr posts via the settings page. Consider sharing your work through other social networks so your friends and followers know about your tumblr presence.
● Ask to be included in community directories – Once your page is up and running, consider submitting a link to it to the Travel Blogs to Follow directory so others can more easily find it.
● Follow and interact with other tumblr users – This may seem obvious, but it’s critical you start following other users and interact with their content. By doing so, your own name will show up on the publicly visible “notes” for that post, helping others find you and associate you with specific topics and content. 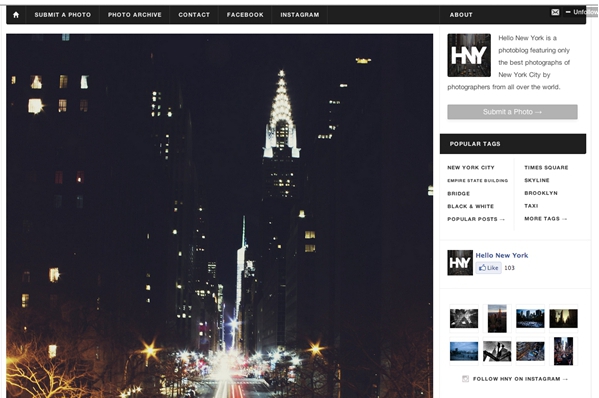 Hello New York is a Collaborative Photo Blog on Tumblr

6. Give your tumblr blog a unique voice.

As you begin to publish on tumblr, think not just about what you post, but also about what you can offer to the community to help you stand out from the crowd. There are lots of ways:

● Explore a specific theme – Many of the best tumblr blogs focus only one specific idea, topic, or subject. Check out this tumblr by the Tourism Board of Iceland which focuses specifically on the Iceland language, or this Matador tumblr called Ireland Homecoming for examples of how to focus your content. Best of all, each user can have an infinite number of secondary blogs.
● Collaborate with others – tumblr makes it easy to create group blogs, allowing multiple users to post from a single account.
● Use the submission function – You can also allow other tumblr users to

Creating truly great travel content can be challenging, but with tools like tumblr at your disposal publishing it is now easier than ever. Have you experimented with tumblr at all to publish your own travel experiences? Share your thoughts and your own tumblr blog in the comments.

*MatadorU’s curriculum goes beyond the typical travel writing class to help you progress in every aspect of your career as a travel journalist.