EVERYONE WANTS AN AWESOME DATE to go to the prom with and both Jacob Lescenski, and is best friend, Anthony Martinez, two Las Vegas, Nevada high school students, will have just that on prom night.

Jacob is straight, Anthony is gay, and none of the two friends had dates for this special night. When Jacob saw that Anthony was lamenting about going to the prom alone on Twitter, he took action and decided to ask his friend to be his date.

Guess who just got asked to prom by @JacobLescenskii pic.twitter.com/eDrTRkX7fp

“I decided on going to prom alone because my original date idea didn’t work out so well,” explained Jacob. “Then one night I saw Anthony, who is my best friend, Tweeting about wanting a date. I then thought about how amazing of a guy he is and that he deserved a date. So, I came up with the poster idea, asked my friend Mia to make it and asked him that next day. No one knew about it except for me, my friend Jamie, and Mia (who made the poster). Therefore it was a giant surprise to everyone, especially Anthony!”

“I just always wanted a date,” says Anthony, “but I knew being gay, and knowing I’m too busy for guys, no gay guy would ask me to a dance, let alone prom. So like any teen I complained about it on Twitter. On April 21 I was down at lunch selling prom tickets and I went upstairs to go to class and saw this giant poster and assumed it was for another person… until I read ‘You’re hella gay.’” 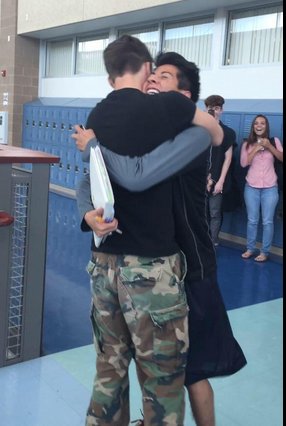 Not only will the two best friends have a brilliant night, but Jacob demonstrated to the world what it is to an ally. Kudos to him for being a genuine and accepting friend.

Tagged
Activism Couples Nevada, United States
What did you think of this story?
Meh
Good
Awesome