Graci In The Kitchen is a rapidly growing online cooking show based out of Taipei, Taiwan. Graci Kim, host and producer, is a New Zealand diplomat living in Taipei undertaking Mandarin studies. Her show revolves around “mood-based cooking.”

In today’s interview, she’s sharing insights on what it’s like to run a successful creative venture outside of your home country.

MN: Graci, you’ve got a very unusual background. How do you introduce your international self to people?

GK: Well I was born in South Korea and then my parents immigrated to New Zealand when I was 3 years old. Since New Zealanders are called Kiwis, I like to call myself a “Kowi,” or a Korean-Kiwi.

My first posting as a Diplomat is to Beijing, so I’m living in Taipei to undertake Chinese language training before I depart.

As a traveling chef, do you find yourself drawn to new foods in new countries and places?

Food is a universal language. No matter where I am, regardless of whether or not I can speak the local language, I feel that the best way to make new friends and explore a new culture is by sharing a meal with someone. I make a point of eating with as many people as possible when I travel to learn about their culture through their own eyes, and stomachs!

How did you get the idea for your show? What is mood cooking?

Well imagine walking into a restaurant and grabbing a menu. Instead of seeing a list of meal options like Spaghetti Bolognese or Ribeye Steak, there is only a list of mood options to choose from.

Research says we spend over 4 years of our lives solely on the act of feeding our bodies.

There may be the “feeling sad” meal that you choose if you’re feeling sad; or a “feeling in love” meal for when you’re head over heels in love with a special someone.

Mood-based recipes, and mood-based cooking is exactly like that. With Graci In The Kitchen, I design recipes to suit a particular mood, because of the amazing ways different foods can feed our bodies, minds, and souls. I’ve always thought about food as nourishing the entire person, not just the body, and turning my passion into a show was really just an extension of how I’ve always cooked.

Can you give us some examples of mood-based cooking?

Let’s take chili peppers, for example. Did you know that spicy food is a natural painkiller? Capsaicin in chili wears down the pain messengers in your body until they aren’t able to send pain messages through your nervous system anymore, temporarily rendering your body incapable of feeling pain. 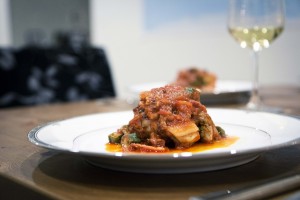 I always cook my spicy Korean pan-fried pork for my friends when they’re hurting. Not only does the capsaicin from the chili help to ease the pain in their body, but a hearty plate of spicy pan-fried pork can really help perk you up when you’re feeling down.

And did you know that honey is the ultimate hangover cure? I’m not kidding. Natural sugars in honey speed up the oxidation of alcohol by the liver, acting as a sobering agent. Because honey has anti-bacterial properties, it boosts your immune system, and soothes that sore throat from screaming in the club all night. In terms of mood-based cooking, forget the cold showers and black coffee for hangovers. Instead, take a tablespoon or two of honey.

You began your show while living abroad. Is running a creative venture while living in a new country a challenge?

Definitely. Living abroad, I don’t have access to my existing networks from home, which means I have to put a lot more time and effort into making new contacts and learning how things work. On the flipside, being in a foreign place heightens my creativity. I’m constantly meeting new people, being inspired by different ways of thinking or doing.

A good friend of mine once said that, “Home is where the heart is. Paradise is where you are humbled into silence at the sound of the song your heart is singing. But true happiness is knowing no distinction between home, and paradise.”

Exploring new tastes and flavors consumes me while I’m living abroad, and makes me think about what unusual foods pair well with the full spectrum of unusual moods you go through on the road.

I do feel like running Graci In The Kitchen at home (New Zealand) would be amazing. That’s just where my core and base is. But developing, filming, and producing this creative venture from Taipei has been equally amazing. I’m discovering new things every day here that I never would have encountered at home, and we try to incorporate that level of freshness to every single episode we create.

I would be making Graci In The Kitchen regardless of where in the world I happened to be — it’s a project of love and passion, and food knows no boundaries!

What has been the greatest challenge Graci In The Kitchen has faced so far?

To be honest, the greatest challenge so far has been a lack of resources. Putting together a high-quality show requires a significant investment. Not only in terms of money, but in terms of time, energy, attention, and emotion. Any creative venture anywhere in the world would be the same.

For the investment, though, I get some tremendous rewards in the form of relationships with my fans. I received a message from a young woman who found my show on YouTube. She told me that she has found creative inspiration through watching me cook mood-based recipes, and that she’s taken up mood-based cooking in her free time. Little wins like this, little points of connection with good people in the world — that’s what makes it all worthwhile.

What has been the greatest success you’ve experienced with Graci In The Kitchen?

A minor win is that one of my videos went completely bonkers on YouTube. It’s about a creative way to separate egg yolks from egg whites using a water bottle. We put it up online, and it spiked up to over a third of a million views in about a month.

We’ve only been operational for a few months at this point, and initial research told me that I would likely be filming for at least a year before my show saw any big growth. Although we’re still an early-stage startup, we’ve gone through a very exciting acquisition recently.

In the beginning, Graci In The Kitchen was purely an online show available on our website and through YouTube. We’ve been picked up by four online television networks in recent weeks, and have been seeing some phenomenal growth as a result. Now, in addition to our website and YouTube channel, Graci In The Kitchen is available on the KoldCast TV Network, and will soon be airing on The Boss TV, SimplyMe TV, and The Food Channel.

What’s next for Graci In The Kitchen?

Well the world is our oyster really! (And boy do I love oysters…) Season 1 of Graci In The Kitchen finishes up in December this year, and while we still have a lot to learn, we’re proud of what we’ve created and what we’ve achieved so far. We’re going to inject all our learning from Season 1 to produce a spectacular Season 2 of Graci In The Kitchen starting early 2013. We have a few special surprises lined up for our loyal viewers, so keep your eyes peeled.

What advice do you have for travelers and people living overseas who are thinking about starting their own creative venture?

The key is just taking that first step, then the next step — and before you know it, you’ll be running. Mark Twain said that in 20 years’ time, you’re more likely to regret the things you didn’t do, rather than the things you did do. I had only dreamt about having a cooking show until 6 months ago, when I took a tiny weeny small step toward achieving that goal. Half a year later, here I am with Graci In The Kitchen and everything that it has become.

If you don’t give it a go, the science of probability says there’s zero chance of success. But if you do, you’ve guaranteed yourself a chance, at the very least.

Tagged
Expat Life Travel Jobs
What did you think of this story?
Meh
Good
Awesome

How to maintain your dog’s health while living the van life
How to actually have fun on a family ski vacation
6 underrated cities in the US to celebrate Black history all year long
The ultimate fitness challenges for 2020 you need to sign up for now
How to go backpacking with a dog, according to an expert

Get paid to study Chinese in Taiwan

A Hello Kitty tour around Japan and Taiwan

This travel website will pay you $1,000 to binge wanderlust-inspiring movies

Get paid $10,000 to travel cross country with Days Inn for two weeks

May 4, 2021 Olivia Harden
✖
travelstoke
Download the mobile app
stoked by