I found out I could be pregnant over a bowl of noodles.

I was eating with a French chick I’d met earlier that day and eagerly tucking into my second helping. As I shoved the long threads into my mouth she exclaimed, ‘Are you eating for two or something?’ When I got back to my hostel that night, I realised I was late.

At the time, I was soaring through the north of Thailand on a motorbike. I wasn’t too concerned and told myself that travelling was just throwing my womb off and not to worry. A couple of days later I went to eat noodles again in another town. This time, for some reason, no one would serve me. I was the only white person there, my Thai was pretty much non-existent and people just looked right through me. I got upset. Really upset. I just cried and cried on the pavement until a local man saw me and demanded a seller feed me the noodles. What was always easy whilst travelling was suddenly getting harder.

I drove through the north for rest of the week. My back hurt. I kept switching between telling myself that it was period cramps and then that I was pregnant. I was a volatile yo-yo and began driving faster out of pure frustration and fear. I went to temples a lot. I prayed and begged like a broken record that I would be okay. Me and Buddha were good friends that week.

I finally got close to a place where I could buy a pregnancy test. I took it and the cold truth was revealed. I can’t really say how I felt. In fact, I felt nothing. I just instantly went into robot mode. I have never wanted children, I tell people that I’m too selfish to have children. I want to be travelling until I pop my clogs. It’s hard enough trying to travel with a boyfriend (if I ever meet him), let alone a child. It sounds crazy to say it but it pained me that I couldn’t take my planned flight to Myanmar: No abortion services there.

Instead, I told the father, researched my options and booked a flight to Cambodia, Siem Reap. I made an appointment with Marie Stopes and holed myself up in a hotel feeling horribly sorry. I had to have an ultrasound and hear the nurse ‘congratulate’ me. I opted for a medical abortion as I was luckily only 3 weeks pregnant. I swallowed those pills and just waited. I had heard horror stories of the process being extremely painful but it wasn’t.

The worst part was that I just kept on going. I toured all the temples, carried on around the country for a month on a motorbike, headed to Vietnam for 3 months. I didn’t regret my decision, I was absolutely relieved but it was incredibly hard nonetheless. I would wake up and realise that I could be pregnant but wasn’t. It really hit me in Vietnam about 2 months later what had actually happened. It was eventually after a year that I couldn’t do it any more and had to go back to England for some respite.

When I did tell people what had happened, the response was unfortunately quite negative. People assumed my pregnancy was the result of a one-night stand, but that was not the case. This guy and I had been seeing each other for about six weeks. When it happened we were both shocked; we were using protection. Part of me gets it. It’s a difficult thing to respond to when someone tells you they were pregnant but decided to have an abortion. But if you find yourself in a similar situation, do what it right for you and use the information I gathered to make the most of the support that is available. 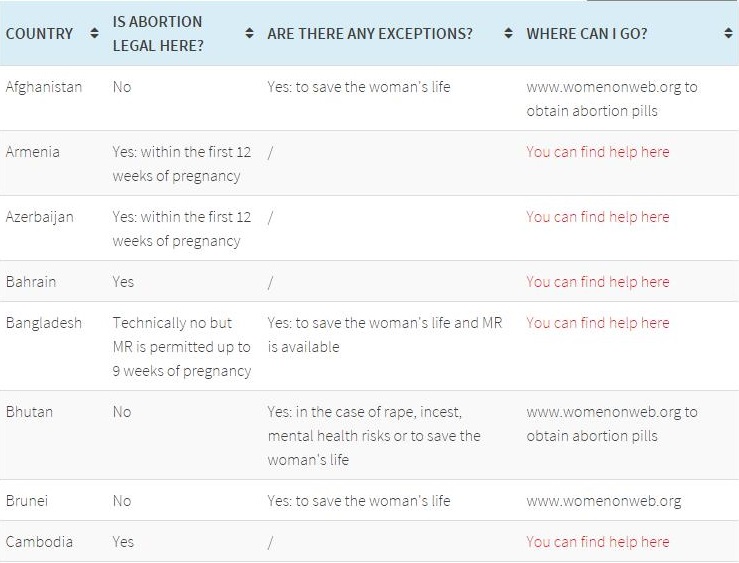 This article was originally published on Teacake Travels and is reposted here with permission.

Southwest Passenger Creates a Fake Person To Keep Anyone From Sitting Next To Him
Avoid This Dangerously Windy Wyoming Highway at All Costs on Your Next Road Trip
This Adults-Only, All-Inclusive Resort in the Dominican Republic Is the Epitome of Luxurious Wellness
Stuck in Economy? 6 Things Under $100 That’ll Make You Feel Like You’re in First Class
11 of the Deadliest Concert Disasters in Recent History