While about 90% of these tectonic plates (including the Mid-Atlantic Ridge) are usually an under-ocean phenomenon, there are a few rare places on Earth like Thingvellir National Park in Iceland where the plates extends above sea level, giving us an incredible opportunity to witness them with our own eyes as you can see from the picture we took above.

The dive (or snorkel) is located in the Silfra fissure, in the middle of Thingvellir National Park. Thingvellir is also a UNESCO World Heritage Site. Whether you are just doing a stopover in Iceland or have set your base at Reykjavik, you don’t have to take a big detour for this adventure. It’s about a 45-minute drive from Reykjavik and 1-hour-and-15-minute drive from Keflavik International Airport. The best way to see Iceland is to rent your own 4×4 and drive around discovering places as you go. Tip: If renting a car is not on your agenda then don’t worry, most every diving tour company provides pick-up options from Reykjavik at a slightly additional cost. 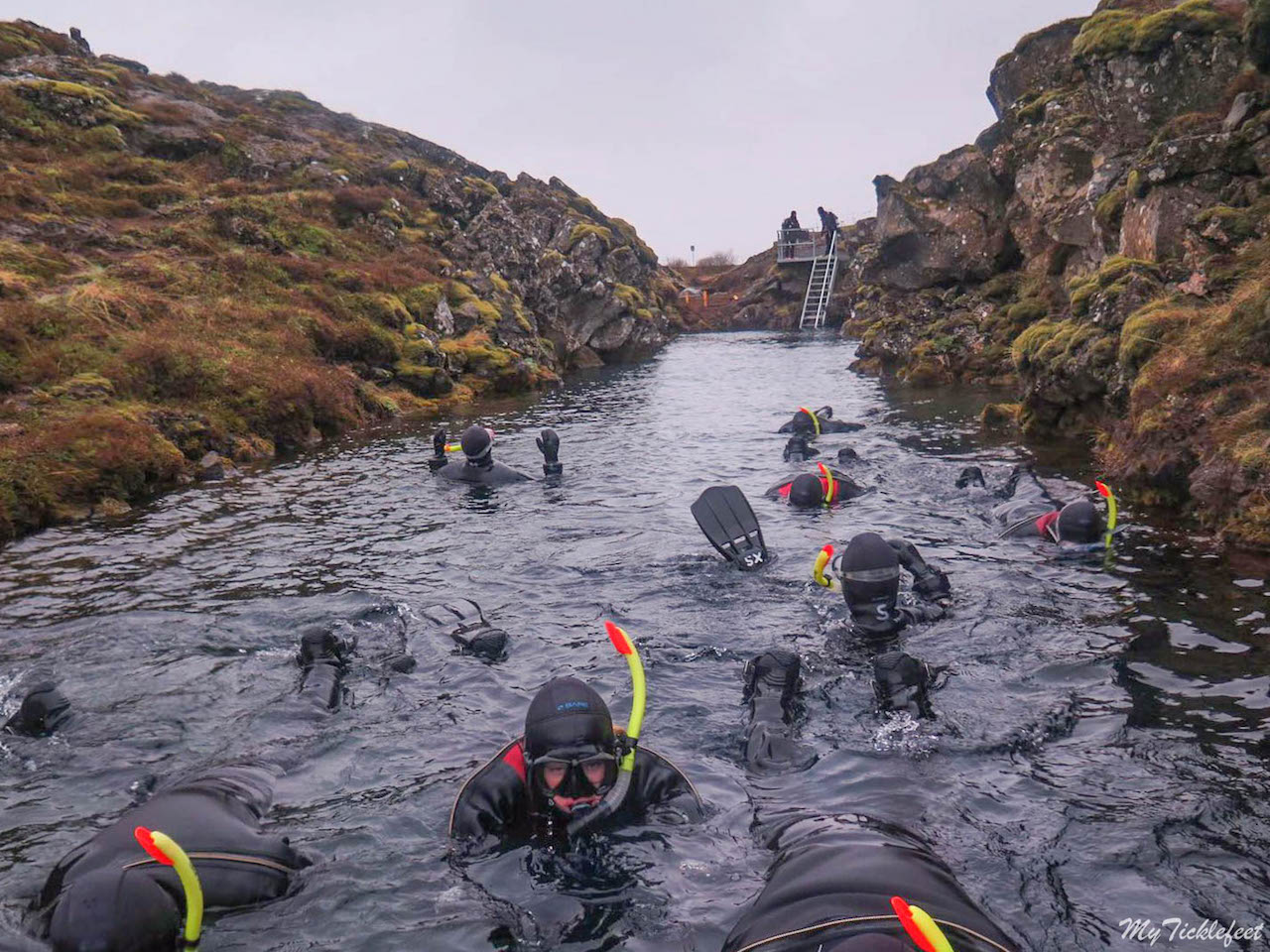 Why should you do this?

Finally, here are 5 reasons why we think this is a must do. It sure was one of the most memorable experiences of our Iceland trip.

Experience standing in between two continents.

You get to stand right in between two continents, North America and Europe! The Mid-Atlantic Ridge is causing the drift of Eurasian and North American tectonic plates every year by almost 6mm, a phenomenon you don’t get to see often above sea level. There are only a few places on Earth where it extends out of the surface of the ocean to be seen above sea level, one of which is Iceland. How cool is that!

Swim between the two tectonic plates and be able to touch them both.

Now imagine being able to touch these 2 tectonic plates at the same time…yes, you can! There are several fissures created due to drifting of tectonic plates and one such fissure called Silfra is a safe and convenient spot for snorkelers and divers to experience this amazing phenomenon. The temperature of the water in Silfra is around 35F (2°C) all year around. In other words, it’s freezing! Tip: Wear a warm under layer of clothing but thin enough to pull a drysuit over it.

Fret not about the freezing temperatures my friends, whichever diving company you decide to go with, they will pack you up in a dry suit which keeps your entire body insulated from the harsh cold temperatures and protect you from hypothermia. The only reminder of cold will be your face and hands which although provided with gloves does tend to get wet but that’s nothing you can’t brave for 30 minutes, right? Tip: To warm your face underwater, turn upside down and swim on your back for a change.

Crystal clear under water views with over 100 meters of visibility.

Another reason why I said you can brave 30 minutes of ice cold water are the splendid views which are like nothing you must have seen before. This will change snorkeling or diving forever for you…to be able to see things crystal clear as far as 100 meters and beyond is just incredible. The science behind the clarity of the water is the fact that the water from nearby Langjokull Glacier passes through many different mountains of porous lava rocks for decades before reaching Silfra. By the time it reaches Silfra fissure, the glacial water has gone through a rigorous natural filtration that provides amazing clarity to the stream. If you get to witness the worse of Icelandic weather as we did, don’t let it dampen yours spirits, rain or shine the beauty under water can brighten up any gloomy day above ground.

Drink the purest glacial water filtered by nature for millions of years.

The same science as above of water trickling through porous rocks applies here, hence creating the purest form of glacial water to reach Silfra fissure. Unlike sea snorkeling, don’t stop yourself from accidentally taking a gulp of water or two…you probably have never had fresh water like this before.

Once in a lifetime adventure.

If all of the above aren’t enough to convince you to jump into Silfra, whether it’s snorkeling or diving, then consider this — It is your once in a lifetime experience! These are the natural phenomenon that we petty humans have no control over and since Iceland is one of the most geologically active land on Earth if you don’t experience it now, then when?

22 Epic Photos of Iceland’s Beaches
Tagged
Diving Outdoor Iceland
What did you think of this story?
Meh
Good
Awesome

You Can Take an Easy Day Trip To the Bahamas on This Florida Ferry
A Stunning New Resort Makes One of the Caribbean’s Least Visited Islands Instantly Accessible
Arizona’s Seasonal ‘Chocolate Falls’ Are Taller Than Niagara Falls
The Great Naked Road Trip: 35 Nude Campsites in the US
Patagonia Baggies Review: I Finally Tried the Cult-Favorite Shorts, and I Get the Hype.