James Chartrand, Copyblogger contributor and founder of the ever successful Men With Pens is apparently a woman. He wears women’s underpants, is the shocking, eye-catching, attention getting title of his..her..his..umm…its coming out article.

Oh, poor, James, um, Jamie, you couldn’t get a job as a woman so you became a man. Oh, I totally understand. Of course, you’re in your late 30s. It was so much harder for us women to find work and support our children way back in the 1990s. Of course there weren’t any women in the workforce making their way back then. James, you poor thing. You’re so right. I’m sure Simone de Beauviour would agree, too.

This fills me with righteous indignation

It’s like watching Betty Draper told that even though her husband is cheating she better stay with him because basically as a woman she has no rights at all in a divorce. Or how women weren’t allowed to vote. 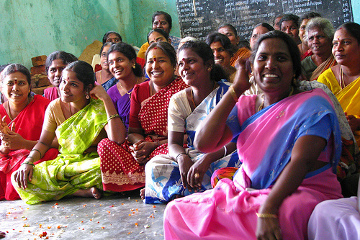 If only someone had thought to address these issues of discrimination against women at some point in history so that woman could begin to achieve the same things as men.

Life can be so unfair when you have a vagina.

Is this just a deliciously ironic mistake in copy?

The Washington City Paper says this goes far beyond a simple constructed masculinity in order to make a living. That, too, was my first thought when I saw the Men with Penises web page. I went, saw the deep gray brick walls and that phallus-shaped object shooting through the logo. I thought to myself, what is that? Is it a bullet? Is that supposed to be a pen? What?

This morning, I check the Men With Pens website again to see a new article titled Taylor’s a Feminist — But So Is James with authorship attributed to James. I tried to read the author profile, though, but was led to a blank page. (I assume this will change later today, though.) Bulls-eye of success, indeed!

Luckily, we women are easy to manipulate and confuse.

What also strikes me is that Taylor-James begins the article with the ever provocative statement of “Feminism is starting to piss me off.”

I can’t imagine what effect that was supposed to have on readers. Certainly not anything cheap or tawdry like garnering our attention right from the beginning, roiling us up in a fine feminist frenzy against James or Taylor or whatever man with a pen is doing the writing. 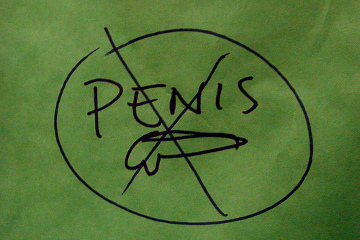 Then we find we are mistaken. Turned around, shaken up in our silly stuck ways of thinking when we find out this James is a woman. A woman who luckily, for the sake of her career, was given the ambiguously gendered name Taylor.

This female Taylor-James says she has kept the other-James’ secret, that she understands that all those years ago, it was so much harder for a woman to make her way in the world alone. She understands why the-other-James had to slop on a detachable penis and pretend.

Does this sound fishy to you too?

The original copyblogger article has almost 2000 tweets and 500 comments. And how high do you think the Men with Pens website has jumped in unique page views since the original article published? It has sparked discussion all over the internet, and who knows how far it will go. Today Show? The View? Maybe even Oprah?

Now, if you’ll excuse me, this 37-year-old woman who makes a living writing must head off and make breakfast for my daughter, and then maybe I’ll go get some chocolate to calm myself down a bit.

Do you believe this is about a woman’s ability to make an equal salary and support her children? Or something else entirely?