Not too long ago, my friend Ester and I were walking down one of the main streets of our home city, Madrid, when we suddenly saw a group of people gathering around a homeless man who had spread several board signs on the pavement. We got closer and read the signs. This is what the first one said:

To all girls who walk by:

From what I’ve seen, heard and perceived, I am a noble, sincere, honest, sensitive person with human values, a good person who, driven by helplessness and humiliation, asks (for charity, or pity) to get laid by a girl. It so happens that, to your eyes, this necessarily makes me repulsive, someone one should stay away just as you stay away from eating shit.

How can you be so cruel and leave me here, lying in the street?

I’m a human being! I have human feelings!

We could not believe our eyes. We kept reading, silently. Everyone was silent. No one knew what to say. 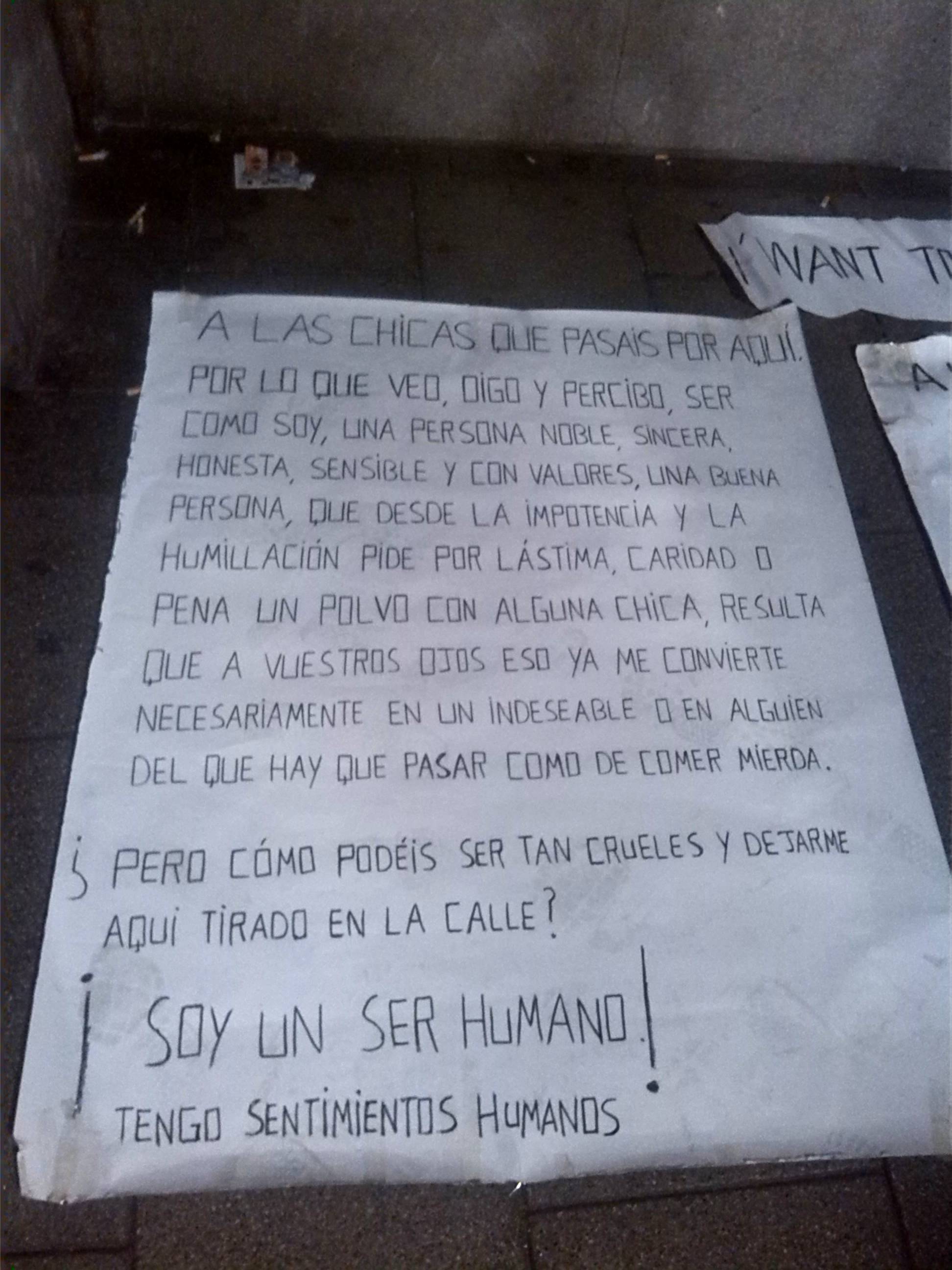 Here is another example of the messages he was displaying in these signs:

Not one single girl has ever approached me to say what I so need to hear: “You know? I understand and comprehend you, I get that if you’re asking to get laid this way, lying on the street, crawling and humiliating yourself, it’s because you really need it, and it’s a shame, and it hurts that these things happen; that because of something that has no relevance for us [girls] — since getting laid doesn’t — you are suffering in anguish and pain. Take these boards away, I’m going to help you”. This is how she would be helping me. 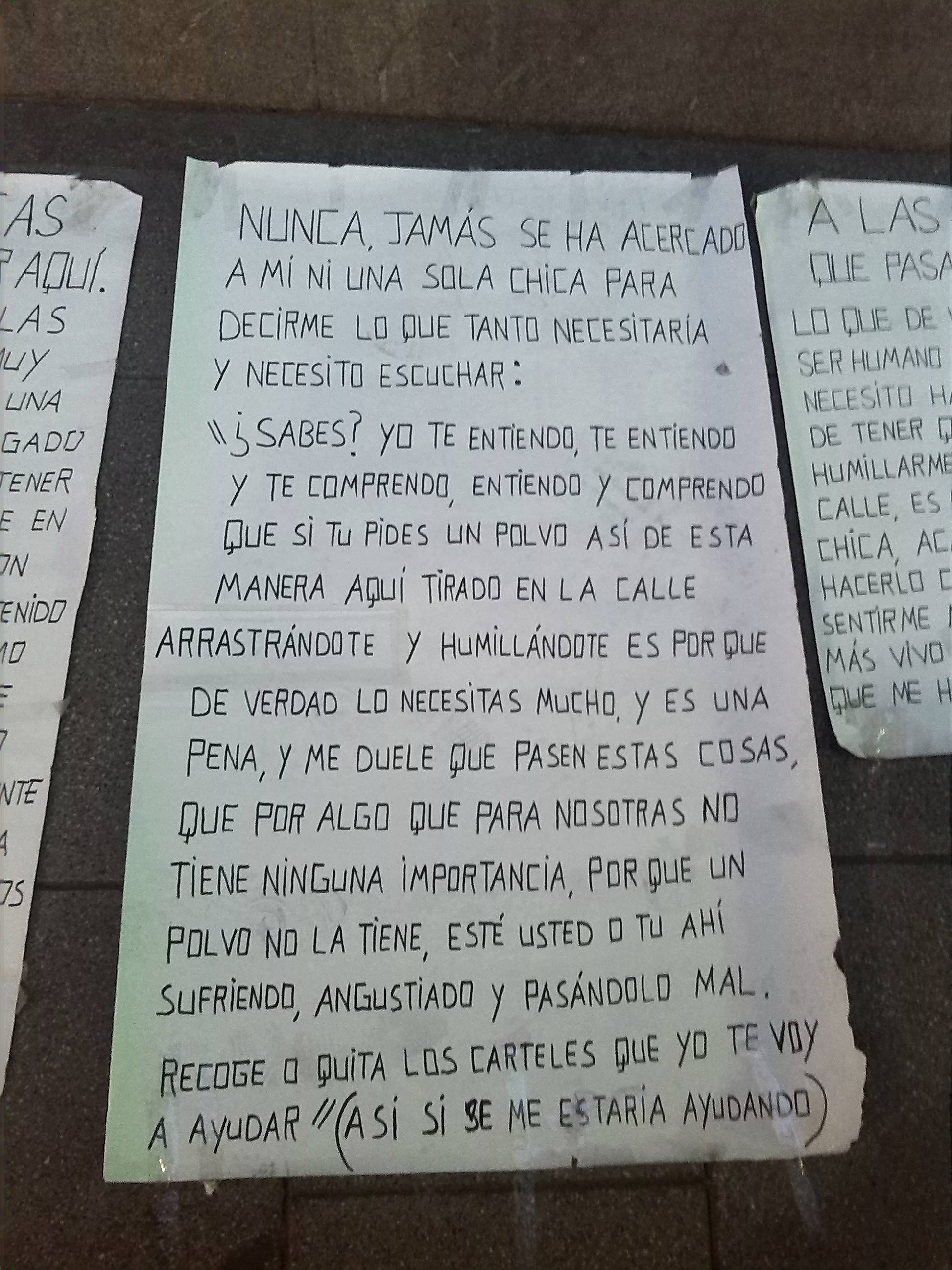 I looked at my friend Ester. She had a mixture of horror and disgust in her eyes. We both took out our phones and photographed these handwritten messages, just as many other people were doing. Not one single person — female or male — approached this man, who just kept lying there, behind his boards, covering himself with a blanket.

I would have liked to ask the rest of the pedestrians their opinion on this, but the situation was too tense and the sudden silence in the middle of this noisy street full of life was self-evident.

As we walked away and started talking about what we had just experienced, we realized that the nucleus of these messages is actually something widely extended and accepted in our society and given voice to in media and social networks, even with a humoristic tone — the concept that sex is something women give to men because they have done something to deserve it.

My thoughts immediately flew to female solo travellers. Of course, the expectation of sex as a returning favor is normally not a problem when talking about tourism (a.k.a. high cost travelling), because the payment for everything (accommodation, transportation, etcetera) is simply money. However, when we travel on a budget and we substitute consumption for other strategies such as hitchhiking or staying at strangers’ house, the concept of “payment” fades out because the people who are providing these means are supposed to be doing it altruistically. But — and this is an important “but” — they are also expecting to get a non-tangible benefit, such as hearing or telling a good story, or creating a bond with an adventurous stranger. Which is not only logical, but the core of low-cost travelling: creating bonds with strangers as opposed to buying your way across the world.

The problem for women, though, starts when something else is expected.

It’s no secret that the expectation of sex as a payment for a ride or a place to stay is one of women’s greatest fears when travelling alone. And you don’t even have to meet a female solo traveller to know this — my grandparents had this fear when I decided to travel solo for the first time, because it’s not a travelling issue, it’s a social issue. Women are constantly told, directly or indirectly, that sex is a reward that we give men as a consequence of them doing something nice for us. Oh, “nice”. What a tricky, tricky word.

What does “nice” mean if you are expecting a pair of open legs in return?

When a heterosexual woman rejects giving a man her phone number after being invited to a drink, we call her a bitch. When she keeps dating “jerks” but wants to be friends with “a nice guy” who’s in love with her, we say it’s unfair. When she has sex with whoever she wants just because she wants to, not because the guy she sleeps with has done something to deserve it, we refer to her as “easy”. All of these reactions are born out of the idea that women’s personal decisions on who they have sex with should be taken based on men’s accomplishments, and not exclusively on their own desires.

But there is more to it. This constant psychological hammering ends up putting women in situations such as having to be nice when saying “no” to your harassing host because, hey, he’s giving you a couch to sleep on, it’s only logical that he expects something in return, right? Many of us, female solo travellers, have had to face this problem more than once – not only the pressure of a man’s logic that you should give him sex in return of a favor, but also the obligation of being extra-nice when saying “no” because we feel guilty about it, because deep down we feel we owe it to them. We accept and become part of this reasoning and that’s maybe the greatest danger of all.

This is exactly what this homeless man in the street was claiming in his signs. He complained that none of the female passers-by gave him sex even though he was a good person, and that this choice made them — us — heartless. My question is: why were his signs causing such an impact on pedestrians when every day we behave in a way that feeds this mindset, or witness this behavior in others without saying a word? This man was not a crazy cuckoo shouting that the apocalypse is coming – his message is the direct consequence of a dangerous assumption we have accepted as a norm, in a higher or lower level, and that we keep alive by pressure or guilt. But he made it explicit, he was straight forward about it. And maybe, just maybe, that’s what was making people so uncomfortable.

This article was originally published on No-YoLo and is reposted here with permission.

Move over AmEx: Capital One and Chase are entering the airport lounge game
This US road trip will take you to the best places to dig for gems
The optimal road trip to see all the US national parks, mapped
The world’s 10 cheapest cities to explore in a day
7 luxurious airport hotels that’ll make you forget you’re right next to the runway

Move over AmEx: Capital One and Chase are entering the airport lounge game

The 12 most photo-worthy spots in Vegas off the Strip