I see examples of sexual violence against women every single day. I see it on the news, I hear it from friends, I experience it.

And consistently, the price attackers have to pay for their crime (if any) is insignificant compared to the terrible consequences victims of sexual assaults have to endure for years, decades, a lifetime.

First, let’s use the recent example of Brock Turner, the former Stanford University student who sexually assaulted an unconscious woman outside a fraternity party in January 2015 and was caught red-handed by two other Stanford male students. He was released from jail Friday, September 2nd, after serving three months of his six-month sentence.

Three months in jail while, The Atlantic reports, “Prosecutors asked for six years in prison, in line with the two-year minimum guideline for each of the three felony counts of which Turner was convicted in March by a unanimous jury: assault with intent to commit rape of an intoxicated woman, sexually penetrating an intoxicated person with a foreign object, and sexually penetrating an unconscious person with a foreign object.”

Turner’s light sentence drew public outrage at the time of the conviction and still does now that he’s been released early for “good conduct”.

His victim, however, has to deal with the psychological aftermath of her attack. In her statement to the judge in June 2016, she explained: “[…] what he did to me doesn’t expire, doesn’t just go away after a set number of years. It stays with me, it’s part of my identity, it has forever changed the way I carry myself, the way I live the rest of my life.”

If that’s not getting away with it, I don’t what it is.

Rape kits are part of sexual assault forensic exams, i.e. very thorough and invasive gynecological examinations. These kits provide key evidence for arresting and convicting perpetrators of sexual assaults. They are also used to create a national database that can help prevent future assaults from occurring. Yet, in 2014, an estimated 400,000 untested rape kits were to be found in US police evidence warehouses. Police departments justify this backlog by explaining that testing every single rape kit takes money and personnel. Comprehensive testing of rape kits — in New York for example — have been proven very effective to find perpetrators of sexual assaults, therefore, it is difficult not to see in this this backlog an unwillingness to dedicate resources and prioritize sexual violence against women .

Are you still unconvinced?

According to RAINN (Rape, Abuse & Incest National Network), perpetrators of sexual violence are less likely to go to jail or prison than other criminals. Indeed, out of 1,000 rapes, 994 perpetrators will walk free, while out of 1,000 robberies, 20 robbers will be incarcerated. 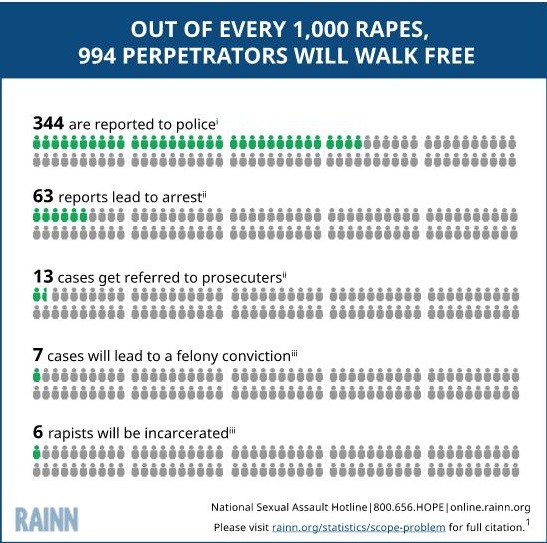 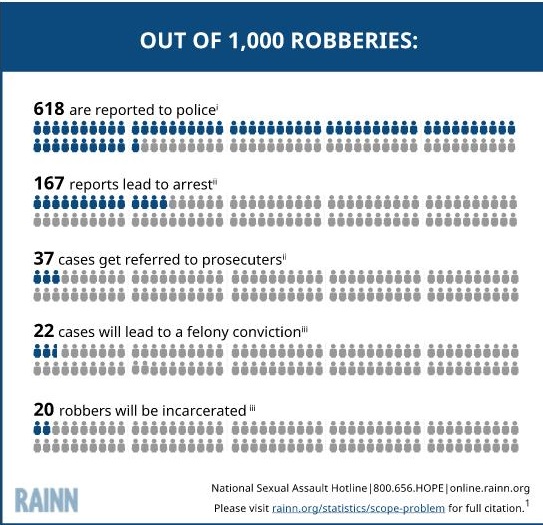 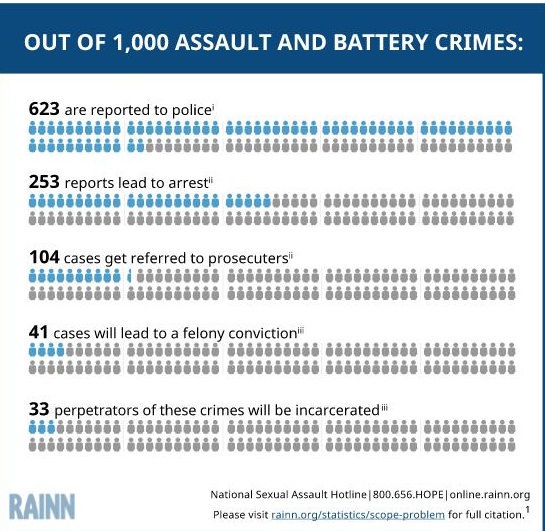 Sexual violence against women is not a an unavoidable fact of life, it is the consequences of values and attitudes that can be changed and it starts with taking sexual assaults seriously and properly convicting the criminals responsible. Women are worthy of justice.