When it comes to celebrating America, it may seem obvious to anyone who’s been in the good ol’ US-of-A that there are certain core components to celebrating our great nation. Things like barbecues, fireworks, and our distinctly American beers will likely be found in every living room and backyard across the country during today’s festivities.

So what happens when folks in other countries decide to throw an American-themed party? The results are hilarious, and rather culturally revealing.

Based on these French “America parties”, America is all about guns, looking like Iggy Azaelia, dressing like a cowboy, our President Marge Simpson, and oodles of flannel.

A photo posted by Aurianne Sinacola (@auriannesinacolaoff) on Feb 6, 2014 at 2:22am PST

Frankly, I have never seen anyone wear anything half that patriotic *in America* on our nation’s own birthday.

House is being filled by these babies! #americanparty #photobooth #party #handmade #punchbowlcreative

It just wouldn’t be an American party without our ubiquitous slang… shazam, y’all!

Amsterdam nailed the burgers, but only half of those partygoers are using our “signature red cups” right.

Apparently “pop corns” are the most American thing to Spaniards.

Beer pong, VIP wristbands, and “partying like a bitch.” #Murica?

In the eyes of Russia, America must be the land of the military, Minions, and overpriced coffee.

Yes, America sure loves its sports… but I can count on one hand the number of people I know who actually own a jersey like that, let alone wear it to parties. “Che swag” indeed.

A photo posted by Ochenta Y Siete Studios (@ochentaysieteoficial) on Dec 3, 2013 at 7:51am PST

Venezuela reminds us of our long-forgotten A-for-America hand-sign. And no American party would be complete without the classic beer helmet.

A photo posted by Ochenta Y Siete Studios (@ochentaysieteoficial) on Dec 3, 2013 at 7:42am PST

Brazil reminds us that the “S” in USA probably stands for “swag.” 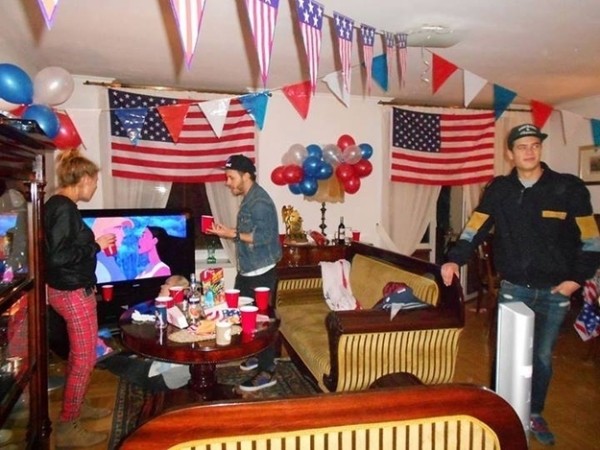 This party from Poland has it all: denim, plaid, red, white, blue, solo cups, and important pieces of our history (like the documentary they’re watching on the founding of our nation).

The best part about this flier for an American party in Romania is not the patriotic dress code, nor is it the Miller High Life, or even the tacos. It’s the knowledge that they believe that America consists of just the 270 miles between Las Vegas and L.A.