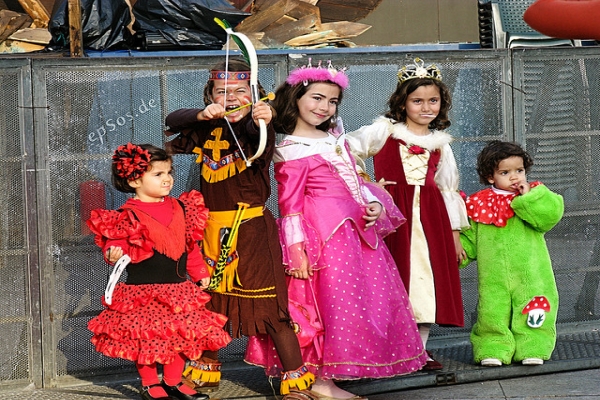 Just because you don’t know how to use a sewing machine or the difference between an armscye and a placket, doesn’t mean you can’t look good at the ball.

I’m not one of those people. You know, the kind who can take a grubby uninspired and over-sized shirt from the Good Will box and turn it into a well tailored, four part jacket as part of a Mad Hatter’s outfit, complete with sewn in LED lights. My sewing skills are limited to a rough hem stitch and repairing the occasional button.

Yes, I am the idiot of which the title speaks.

Every Adult Should Have A Costume Box

Still, I’m not going to let what I can’t do yet get in the way of something else I want to do. Yep, I have my tricks for filling the costume box without driving myself crazy, spending too much money or ending up frustrated over a pile of half finished projects I’ll never use.

The base of my costumes begin second hand. Good Will, Salvation Army, Army-Navy surplus stores and stoop, garage and yard sales. I rarely buy anything costing more than $15.00. 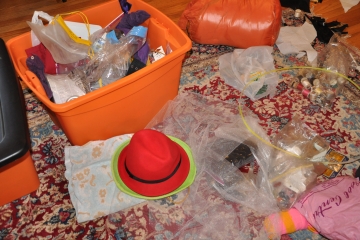 I buy things I really like. I have to like them a lot. Fuzzy sweaters, bathrobes, bustiers, tutus, vintage rain coats, really anything that catches your eye. Everything I choose is comfortable and versatile.

Most pieces serve a double function. My neon green hat has been part of leprechaun, cowboy and super hero. Red hat? Sinister criminal turns to jaunty Santacon elf and eventually becomes weird bride by attaching a veil. (Tell you how below.)

Those silver boots, by the way, have never let me down. I’ve biked, walked and run in them, depending on the occasion. Add a pair of knee socks with a fur strip on top, and they’re fur lined.

This is where I find shiny, textured meshes and lames, glittering star buttons and faux fur in a variety of colors. Ribbons, feathers, fake leather, even plastic fabric you’d imagine as a table cloth all work well lining collars and sleeves, highlighting anything you want. 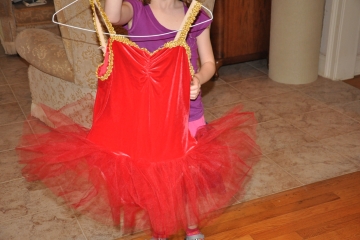 Hardware stores also offer plenty of options particularly for fixing broken finds. You should never underestimate the usefulness of a zip tie.

The Zen of Costume Boxing

My costumes start really simple. A black lacy bustier was meant to be top for a fancy dress ball gown. I never did find the right bottom. Eventually, I will.

The changes I make aren’t permanent. Everything can be undone. I’ve had more costume ideas fall flat than blow up, and using removable pieces allows me to recycle materials.

Over time, the pieces I add connect to create themes. Silver boots match silver fabric lined boy shorts. I’ve been wanting a good tutu for a while now, but didn’t find one until a stop at Psycho Sisters in Little Five Points, Atlanta. That is my little red dancing tutu. I’ll wear it as is to Burning Man later this month, but eventually I’d like to do something with the straps.

It’ll happen when it happens.

I took a piece of self adhesive Velcro, attached the fuzzy soft side of the Velcro to the front part of the inside of the hat. Then I doubled up a big square of mesh and bunched it up on the adhesive side of the harder, spiky part. Connect Velcro parts and wear. Easy to switch out with other fabrics.

The umbrella is my main project this year. It had been missing a plastic spoke cap and while it would have been a nice as a prop, I also want it to be useful and maybe give a bit more shade than light lace can. 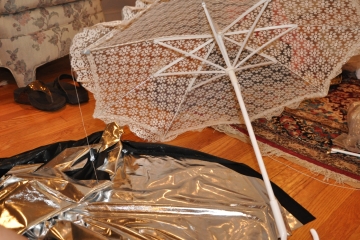 A wire cap nicely replaced the spoke tip. I cut a groove in the plastic before sewing it on with needle and thread. I cut shiny silver fabric into triangles and big-stitched them to the underside of the umbrella. Both hold in place securely, but are also easy remove.

Last year, someone gave me an amazingly soft blue bath robe. Only problem, it’s too big. I’m not quite sure what to do with it, so I’m asking a friend who is one of those people for ideas. I’ll let you know how it goes.

Do you make your own costumes? Brag about your costuming adventures and tell us what you did.