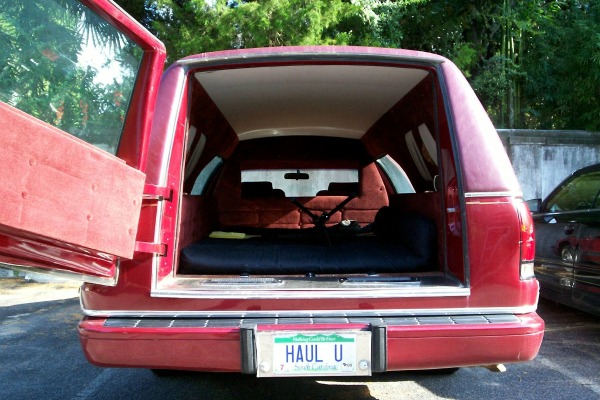 Meet Ruby. All photos by author.

Lisa Rogak explains why she loves driving a hearse, and how to go about buying one yourself.

I usually feel the eyes boring into the side of my face when I’m stopped at a red light. Other times, I’ll be peeling down the highway at 70 mph and out the corner of my eye I’ll see a car the next lane over has drawn parallel with me. Sometimes I turn and wave. Most of the time, I just ignore it. Indeed, much of the time I don’t even notice.

When you drive a hearse that’s not part of a funeral procession, and it’s obvious you aren’t carrying any of the usual cargo, this kind of reaction comes with the territory. Even more so when the hearse is bright red, and has vanity plates that say HAUL U.

I’ve been driving hearses for over a decade. I am now on my seventh, a red 1992 Buick Roadmaster Eagle named Ruby that I bought from a funeral home in South Dakota. I like hearses because they handle well, drive like a tank, and are easy to locate in a jammed parking lot. I’ve also been waved through late-night checkpoints more than once.

Hearses have gotten into my blood. I love to drive them.

The gas mileage isn’t much worse than a standard-sized SUV, about 20 mpg, and on the highway I’ve occasionally bumped it up to more than that. The carrying capacity is great. Over the years I’ve fit sheetrock in the back, farm animals, all the equipment for a five-piece band, and have helped a lot of friends move.

Hearses are generally well-maintained – it’s not good for a funeral home’s reputation to have one break down on the way to the cemetery – and the mileage is pretty low for a vehicle of that vintage. I bought Ruby a couple of years ago with only 45,000 miles on her ticker.

How I bought my first hearse

Though I’ve always made my living as a writer, back in the late 1990s I had a side business buying and selling vintage funeral equipment on eBay. I bought the stuff that had been stored in the back rooms of small-town funeral homes, left over from the days of the proprietor’s grandparents. The proprietor was always happy I wanted to buy the caskets, furniture and supplies, most often to clear out some room. 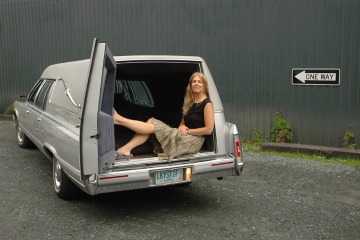 Hearse number 6. Comfortable for the living, too.

Before long, funeral directors asked if I’d be interested in taking an old hearse or two off their hands. Sure, I said, which touched off a long line of hearses that I’ve bought and sold and used as my primary vehicles. I joke that it’s because they don’t make station wagons big enough anymore, but the truth is that hearses have gotten into my blood. I love to drive them.

People are usually surprised that I’m not a big fan of Halloween, though I dutifully haul it out each year for haunted houses and parties. They also automatically assume that I’m into goth or heavy metal, and have a morbid nature. The truth is that I am none of these things: I play classical piano, write biographies, and am a regular Martha Stewart in the kitchen.

Driving a hearse does make for some interesting encounters. A couple of years ago, when I was living in Charleston, South Carolina, I stopped one day in the parking lot of the local supermarket. A guy was heading towards his truck parked the next spot over, and stopped to stare at the hearse. I issued my standard line, certain to bring a smile:

A woman at the next pump went ballistic, screaming, “You took my mother away from me!

No way could I go back to driving a boring car.

Along the way, I’ve met some more people who drive hearses for reasons other than gainful employment, and we often compare stories. One told about the time he was filling up at a gas station and a woman at the next pump went ballistic on him, screaming, “You took my mother away from me!”

Another told about a little experiment: he pulled into a packed shopping mall parking lot one Saturday afternoon, rolled down all the windows and placed a $20 bill on the front seat. Two hours later, he returned from shopping to find no other cars parked around him, and the money still where he’d left it. 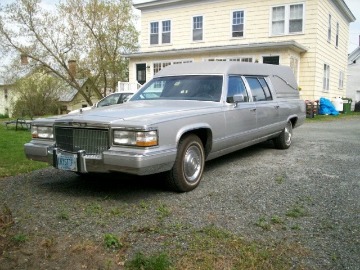 How to buy your own hearse

If you’re interested in buying a hearse of your own, there are several places to look. EBay provides a constant supply, though it’s vital to check the condition before you buy, since hearses tend to sit for a while after being put out to pasture.

One good place to start is by signing up with the Professional Car Society, an international association of hearse (and ambulance) owners that offers a regular newsletter, annual convention, and an extremely active forum that includes for sale listings. Also check out Professionalcar.org.

CW Coach in Cincinnati gets a steady stream of older hearses in inventory, as does Southwest Professional Vehicles in Dallas and Kansas City, and Parks Superior in Connecticut. And the S&S Coach Company provides a long list of smaller regional dealers that also serves as a great starting point.

When buying a used hearse, keep an eye out for the same things you would when purchasing any secondhand vehicle. It’s always a good idea to have a mechanic check how things are running under the hood, and to crawl underneath to check the body for rust, since hearses that sit for a while tend to develop rusty patches.

Some hearses come tricked out with flames painted on the sides, hydraulics and glasspaks installed, and minibars and shag carpeting in the back. I’ve always been more of a purist and have kept mine in their original state.

But be warned: if you do decide to join the ranks of hearse owners who do it for the sheer pleasure, this time next year you’re going to be very, very popular!

Ever driven a hearse yourself? What about other unusual forms of transport? Share your stories in the comments below.