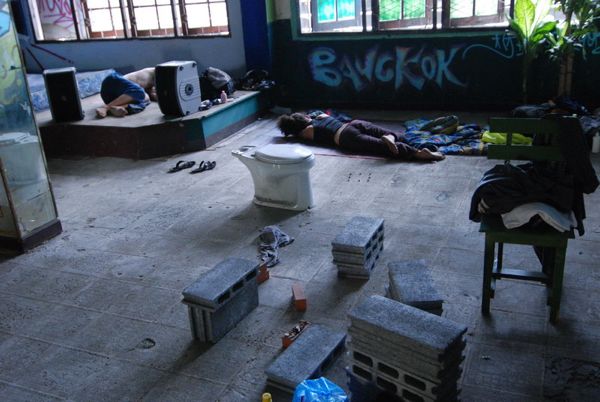 The floor at The Overstay. All photos by Greg Goodman

A dorm bed at The Overstay in Bangkok currently racks at $0.62 a night on Hostelworld. How bad could it be?

“PLEASE DO OVERSTAY!” EXCLAIMS the website for one of the cheapest guest houses we’ve seen in a while. A tour around their site makes this seem like the smartest spot in BKK, a real find for people who are “into exchanging ideas, languages, music, art and love.” The space includes a bar, a music studio, free language classes and nightly dinners. The catch? 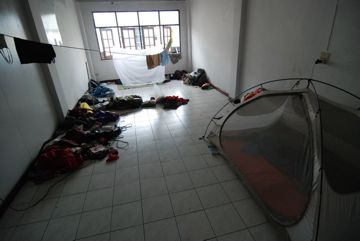 “People sleep anywhere they can.”

It turns out that the dormitory, according to The Overstay site, “has the feel of a hippie refugee camp with mosquito nets and big backpack brought by people from all around the world.” Photos from past guests would suggest that it’s more of a pigsty than anything else.

Turning up at The Overstay could be a shock for anyone booking on hostelworld, who make no mention of the dorm conditions.

Mariaborland6641: “Ended up on the floor of a dirty and windowless cell on an unwashed sheet…lay awake sweating profusely. Also no running water anywhere.” (7/7/09, Hostelworld) 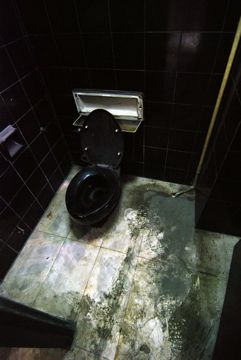 “The cleanest at The Overstay.”

Ariana From Canada: “We did not stay at The Overstay because when we arrived there were only drunk men in the ‘lobby’ if that’s what you would even call it and no reception area to check in… I would not recommend any females to stay there and i really do not think it should even be on hostels.com as the check in counter was a bar and they didn’t even have our reservation when we got there.” (9/13/09, hostels.com)

These two wouldn’t be the first to turn up at a guesthouse that has glossed over some of its flaws. But it also doesn’t sound like a fair shake for these guests, who might have looked at The Overstay’s website and expected to enter “Bangkok’s number one chillout spot”, which they further describe as a “six tiered cake of fun and living.”

The question raised is not a new one. Just how much credence should you give booking sites? What does it mean that The Overstay is listed on Lonely Planet’s site, via a re-run of the Hostelworld review?

The same page suggests that booking with LP gives “expert advice from Lonely Planet authors.” Would Lonely Planet list The Overstay if they sent someone to see it? Or is re-running another site’s review simply enough for them, since they’ll pick up a commission on bookings? Either way, somebody’s daughter is spending the night in a squat. 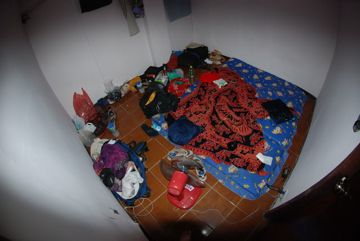 To be fair, many people seem to dig the bohemian squat space, presumably because they’re sure of what they are getting into. For the right person, The Overstay may be heaven.

Juanluckey writes on The Overstay’s site, “I encourage this place to promote positivity, love, and if you have some creative art talent, that is even better.” TheLostNY describes it as a “diamond in the rough.”

So, we ask. When does spin become mistruth? Do booking sites have the responsibility to do any investigating, beyond what information the hostel provides them? Or does a person expecting clean sheets for $0.62 per night have it coming to them?

We have since posted a follow up interview with The Overstay’s owner here.

For a Bangkok hostel of different ilk, check out our review of the badly-named (but nevertheless-blissful) Lub*d. Our ever-popular guide to hostel sex is also out there, waiting for you to take it into a quiet corner. For some completely different crash-space, lend an eyeball to some of the coolest campers around.