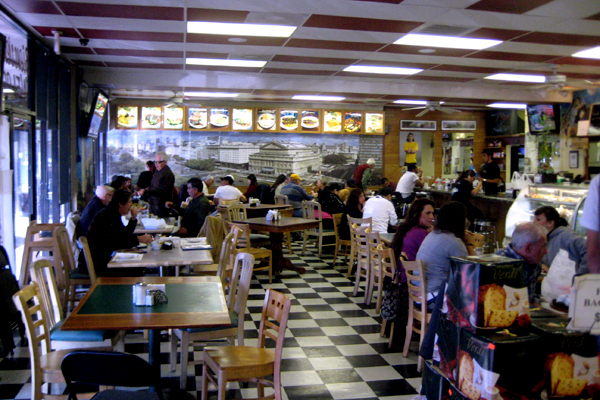 Everything about this photo screams Buenos Aires except the strip mall store front. This and all photos: Tom Gates.

There are several restaurants attempting Argentinean food in Los Angeles, most of them designed for power-lunches and full of disappointing menu concessions, from chicken caesar wraps to dumbed down chimichurri (“It’s not, like, too garlic-y, is it?”).
I went in search of something more traditional and found it in Van Nuys, just twenty minutes from my Hollywood driveway.

I’D BEEN TIPPED to Mercado by the guy who cuts my hair, a Buenos Aires native who supplements his acting income with a bit of clipper wizardry. His accent had been tamed by speech coaches, but as soon as we started talking about food, he went full-on berserk with LL-gone-J Argentine Spanish. He was crazy gusto about this place.

Mercado Buenos Aires sits in a strip mall in the valley. I knew it was the real deal as soon as I pulled up – every sign in the plaza was in Spanish. 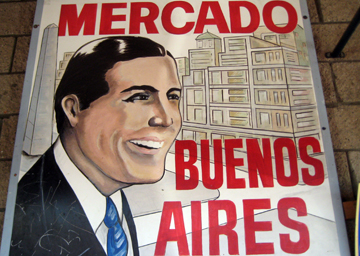 Upon entering, Mercado made me weepy for Buenos Aires. Half of the room was dedicated to a butcher counter, a bakery and a market filled with bags of mate and salsa golf. My nostalgia for the latter was a complete surprise to me, as it is gross beyond words.

The other half of the room is pure parilla. Wood tables and chairs, silly soccer memorabilia, a counter for those not table-inclined and a crazy whiz of patrons and staff. Everywhere there were baskets of bread and chimichurri, hurried orders and at least one of every patron’s eyes on the football game being aired on five television sets. One online reviewer has said that the place looks like “an earthquake designed the interior” and I’d agree. I ate it up. 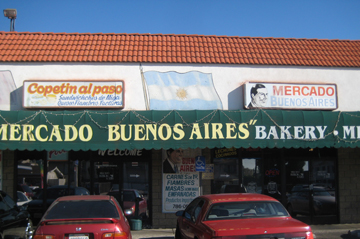 I wished that I hadn’t gotten the waiter that I did. It didn’t have anything to do with his service. It had everything to do with his arms, which distracted my every vowel, leaving me entranced and mute. I had practiced my Spanish on the drive over, excited to remind myself just how terribly I could butcher verb tenses. He wiped the table, showed the guns, and I became capable of no foreign language. “Menu please.”

I considered the full boat meal with body part sausage, remembering my meals in Buenos Aires with Kate, who walked me through the language of small intestines, brains and unmentionable body parts. Instead, I opted for a simple Bife do Chorizo and stared at the full-wall photo mural of downtown Buenos Aires, wondering who had taken a picture of the boring cityscape and not one of the city’s amazing murals.

The food was presented as it should be – with a smile and a plunk. It rivaled the porniest steaks I’ve ever had. 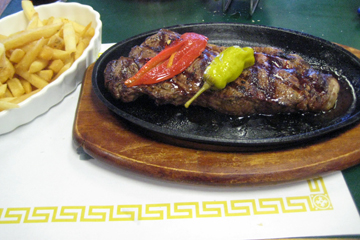 Bife de chorizo (that’s a boneless sirloin to you).

The sharp steak knife cut the meat apart in a last heartbeat and the fries were piled high, although the condiment packets made everything feel a bit Taco Bell. I devoured and smiled, remembering how simple my best meals in San Telmo had been. And cheap. In contrast, this meal and soda ran me $25 (with an excessive tip for Arms), way more than I was used to paying at the Buenos Aires joints Matador inhabits.

A gaggle of older women shuffled in as I was leaving, and started to point for choice cuts of meat, comparing notes and coveting the prime chunks. One guy was leaving with two or three pizzas, making me wonder if they were as goopy as some of the worst I’d had in Buenos Aires, or as good as the ones I’d had after being pointed in the right direction.

Driving away from Van Nuys I began to spot more strip malls with South American food, making a note to get myself back to the arms of the valley soon.

If you’re interested in the real Buenos Aires, you can find Matadorians’ takes on it on our Buenos Aires focus page.

If, however, you are in or planning a trip to LA, why not take a peek at our California focus page for some short trips to take you away from the city, find out what NOT to do in LA, and read about the hipster bars of Silverlake?