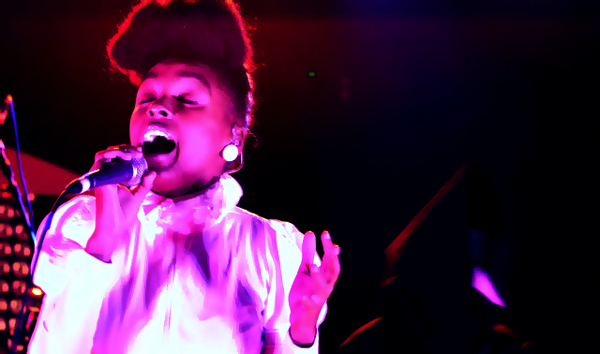 I heard of Janelle Monáe on November 8th, 2009 in a facebook post in which an ex-boyfriend of mine was practically wetting himself over her apparent musical genius. (And yes, I remember the date.)

In addition to all the yelling and sobbing that came with young love gone hideously wrong, he did introduce me to some excellent music. Once I heard her, I was hooked.

And so I got tickets to see her open for Erykah Badu on June 22nd, 2010 at Humphreys Concerts by the Bay, in San Diego, California. Humphreys seats about 1,000 in rows of white folding chairs on gleaming astroturf. This setup might work for Badu, but I wondered how Monáe’s high-energy sound would function in this sedate, constrained space. I knew the music would compel me to dance and I didn’t want to be the only dork on my feet so I tried to forge a groove pact with a young woman nearby.

The lights dimmed and the MC, a tall, gorgeous black man in a top hat, welcomed us to the show and said, “If you open your minds, you might be transported to another world.”

As Janelle and her crew did their thing, I looked left and saw that my dance partner wasn’t budging even though I was already halfway out of my seat. When I heard the opening chords of Tightrope, I could wait no longer. I sprang up and spazzed with joy.

Couple in front of me: Sit down!

Voice from the aisle at my right: Hello, would you like to dance with Janelle on stage?

I turned and there stood that gorgeous MC with his hand extended. “Hell, yeah!” I replied, hopping over my wide-eyed husband. Top Hat raced me to the front and brought me behind the curtain. 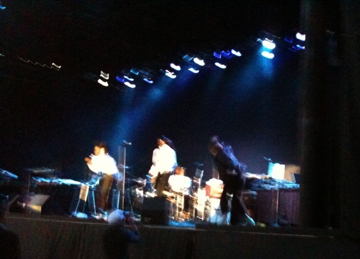 Bliss in a Windbreaker: Yes, this is more of a ‘pic or it didn’t
happen’ photo. See that blur on the right? That’s me.

I was herded stage left and told not to stray from a white tape demarcated space. I felt the spotlight hit my face. Janelle must have seen movement in her peripheral vision because she turned and our eyes met for a hot second.

Unfazed, she didn’t miss a beat. I responded in kind with my special brand of spazzolicious. The drummer, clearly amused, urged me closer so I shimmied on over and we flirted until Top Hat returned to whisk me back to my seat.

Janelle finished the song with a James Brown style flourish. The lights went up. People began milling about. The couple who had previously suggested that I park it now congratulated my gyrations. Others did the same and asked how I was “chosen.”

“I don’t know, I just got up and danced. Maybe I was the only one.”

So that’s the lesson, folks, at least at a Monáe concert. Dance, motherfucker, even if you got no skillz. Who cares if your hair’s a mess and you’re sporting a lame-ass windbreaker? You still might get swept onstage to rock out with your favorite singer and her crew and be transported to another world.

To know what major San Diego entertainment events are on when you come to town, always check the city’s calendar of events.

More painfully candid writing from San Diego? We’ve got that. Tom Gates’ Notes from The Grand Del Mar Hotel, San Diego blew up on Matador for a good reason.

Got your own story to tell? Find out how in Brush With Fame: Your Stories Wanted. And read the rest of the (admittedly still rather short collection) in our archives.