With a sea of tango venues in a city that has long been breathing the traditional sounds of tango and mixing them up in every way conceivable, it can be tough to keep things fresh. Enter the Orquesta Tipica de Fernandez Fierro

AT FIRST SIGHT of the hipster crowd silhouetted against the mysterious red glow that pours onto the street from the Club Atlético Fernández Fierro, you know that this isn’t your typical touristy tango show.

Step inside to find lights darting disco-like across renovated warehouse walls to the full-bodied sounds of a traditional tango infused with rock and jazz, piping from the souls of musicians who radiate an undeniable sense of “cool.” 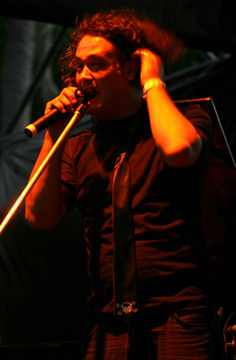 With a sea of tango venues in a city that has long been breathing the traditional sounds of tango and mixing them up in every way conceivable, it can be tough to keep things fresh.

Set in a transformed warehouse in the legendary Gardel neighborhood in Abasto, the Orquesta Tipica has truly carved a unique place in a very cool space, and has recently accrued an almost cult-like following of diverse fans who come to weekly Wednesday night milongas and regular Saturday night affairs held in the group’s practice space.

The band is composed like a traditional tango orchestra, with two violins, a double bass, piano, four accordion-like bandoneóns, and all the mystique that could be imagined of a dark cavernous milonga of the 1940s.

Twisting it up a bit, the orchestra never ceases to surprise with its soulful renditions of classic melodies spun into dramatic song, played with such passion and vigor that the act is as much fun to watch as it is to listen to.

The group’s lead singer bellows thunderous tones as he sashays across the stage, often festooned with an Argentinean flag, human sized champagne bottle, and other wild props that celebrate the nation’s culture or mock the world’s ironies.

A live house cat adds to the excitement, bouncing about the stage as if part of the show, then disappearing into the crowd. 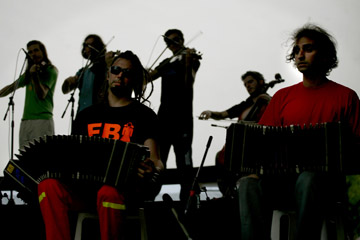 Though the dance is not the main act here, professional and novice tangoers alike whirl through flashing lights in the back of the room.

Free classes at 9pm precede Wednesday night events, encouraging more of an inclusive milonga feel than the cookie cutter tango show that has become a spectator sport. In the corner, a no frills bar serves up cheap beer and fresh empanadas well after the show ends.

Shows Wednesdays and most Saturdays, email in advance to reserve a table or prepare to pack in with a (always large) loyal crowd.

Check out this article about the best of the Buenos Aires dance scene. Quite a few Matador members have also enjoyed Tango in Buenos Aires, both as students and spectators.

Tim Paterson thoroughly enjoyed his time at Fernandez Fierro and Kelly Rice has written some great blogs about her experience with this timeless art of Argentina. If you’re headed that way, be sure to ask at least one of our Buenos Aires experts for tips before you go. Their names are Ryan and Lucia.