BANFF, ALBERTA IS A BIT of a party town. Considering that much of its population consists of short-term visitors from overseas (especially Australia and New Zealand), this probably isn’t much of a surprise. It’s touristy as heck, but the nightlife is intense and it’s perfectly acceptable to get sloshed at 3pm on a Tuesday afternoon. Or it is when you’re me, at least.

On my first drive through town, I was introduced to The Eddie Burger + Bar. It’s a tiny spot, but it’s home to some epic burgers, including “The Edward” with a beef patty, pork patty, chicken patty, and hot dog. Yeah, a hot dog. I opted for the more refined Rocky Mountain Burger, a large elk patty which I tried to balance with the healthy salad option. It didn’t work.

But despite an onslaught of the meat sweats and a stomach bloated with protein, I could not resist The Eddie Trashcan.

It tastes delicious, and it will probably make you go blind.

The Eddie Trashcan also creates a lovely illusion whereby you think the drink is finished, and then you lift the Red Bull can to release a crapload of more booze. It’s like Christmas Day when you discover that one hidden present behind the couch. 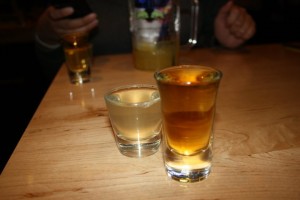 A Pickleback, better than Nickleback.

If you’re really trying to impress your friends, or if you want to break your own personal record of debauchery, follow up the Trashcan with a Pickleback shot: a shot of whiskey followed by a shot of pickle brine.

Apparently this is the kinda thing that stays off the menu — perhaps due to some liability issues concerning potential death — but I assure you the Pickelback is nothing to sneeze at, and all you have to do is request it at the bar. It tasted surprisingly delicious, although this may have been a result of deadened taste buds caused by the infusion of six different types of liquor.

Swing by The Eddie Burger + Bar in the early evening to grab a seat, as the place can get crowded in the evenings (especially weekends).

Tagged
Travel Banff, Canada
What did you think of this story?
Meh
Good
Awesome

Banff and Lake Louise Might Be the Most Gorgeous Places To Ski on the Planet. Here's Proof.