THE BAND stands in front of their instruments clothed in matching yellow vinyl cutoff uniforms. They look like Kraftwerk meets Pikachu at a weird kitschy bar on the outskirts of Mexico City. They gleefully dance around a playground (their other videos take place in other parts of public parks). 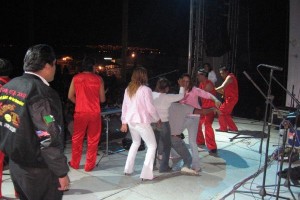 The band is overwhelmed by “este cariño loco.” The “crazy affection” to which they’re referring is a young woman dressed like she’s employed by a dude ranch. Each member of the band tries different approaches to steal her heart. The lead singer tries seducing her by playing an electronic drum kit beneath the monkey bars.

The other electronic drummer hopes his ‘N Sync-era frosted tip haircut will make her swoon. The keyboardist hopes she’ll like his awesome chain wallet. The guitarist gives her a big hug, and hopes she digs his “60s-B-movie-zombie-look.” The bassist clearly knows the fastest way to a woman’s heart is by pushing her on a swing.

Nobody in the band can sweep the young ranch-hand off her feet, because este cariño is too loco!

I really like this song because I’m a nerd for the preset sounds on 80s keyboards, and I love the video because it is totally earnest. And as the great wordsmith Oscar Wilde taught us, earnestness is the easiest way to clown on fools.

Bonus: Here is a Spotify playlist of some contemporary cumbias that I like, including “Cumbia Mario Bros” and “Cumbia Tarzan.”