“YOU MARRIED? YOU HAVE CHILDREN?” Shiine Akhyaar Ali, the lead rapper and manager of the Somali hiphop collective, Waayaha Cusub (New Era), asks me through his webcam, connecting from Nairobi to New York. He’s glowing with love for his son, putting the kid’s dimpled little face up to the screen. “Hello! Hello!”

I can’t help but laugh. Mashaaaaalllah. 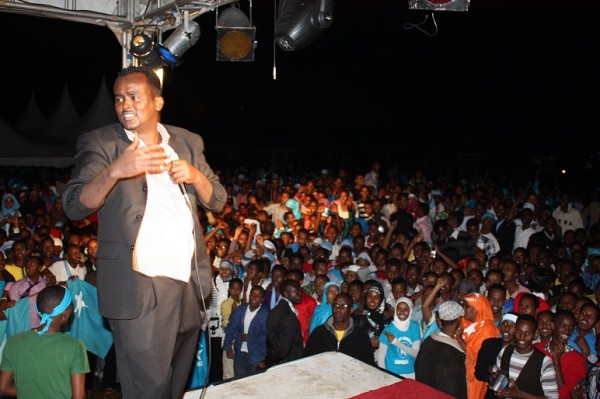 Shiine Akhyaar at a concert rally in Nairobi. Waayaha Cusub.

“Nah, not married, almost, but not yet,” I tell him. “Let’s take on Mogadishu first.”

Shiine, his group, his tour manager Jama, and I have all reached our most uncertain point yet in our planning of the Somali Sunrise Concert Tour.

To persuade youth and would-be fighters from supporting the extremist, anti-music rebel group Al Shabaab and other war machines in Somalia, the musicians have to first strengthen alliances between Somali musicians based all over the world.

With their help, the musicians and our media team can woo global stars and merge audiences until we can communicate to large numbers in one voice: When teenagers in Nairobi, Stockholm, and Minneapolis find our shared music videos, promos, and messages, they’ll re-share via web and cell phone to their cousins in Somalia.

Youth in the front line areas who are tired of hearing clergy, officials, and aid workers saying stale messages may be more excited to see Somalia’s own version of Kanye or Alicia Keys.

The Somali performers in our coalition rap to these youth in their own language about how the dark days of war and hunger are almost over, that through unity, open minds, and refusal to support killers, a new Somalia can be built.

Three months from now these rappers and singers will be crossing the country to the newly-reunited war zone capitol, Mogadishu, to bring the message — “No to Al Shabaab” (video below) — in the first modern concert series in 20 years

For Shiine, his wife singer Falis Abdi, and their Motown-like community of Nairobi-based rappers, sirens, and beat-keepers, this climb has been life-long, and peppered with threats and violence. Shit, just a couple years ago radicals outlawed music in the rebel-held south half of the country, hunted down and murdered musicians in the Somali capitol, and then hunted down Shiine and shot him.

But Shiine, this dude, gets out of the hospital spinning lyrics, resurrected like an East African Tupac, rapping against the guys who tried to kill him. Last week, he called me up by video conference with a surprise. But first he wanted me to try to talk to his son.

But Shiine, this dude, gets out of the hospital spinning lyrics, resurrected like an East African Tupac, rapping against the guys who tried to kill him.

It breaks my heart seeing him smooching that kid, his wife behind him with their daughter and a family friend, and knowing that even in their current home town of Nairobi, Kenya, radicals have been threatening them. And yet, they are ready to take their message, their life’s work, right to the middle of the conflict zone.

Despite having two very young kids, Shiine’s not afraid. Falis Abdi, Shiine’s wife, and the group’s most beloved star, singer Digriyo Abdi (who was attacked on the street back in the fall), rapper Lixle Muhadin, and the others of Waayaha Cusub are also over being worried about threats. Part of it is that pious belief that when your time comes, that’s it, so might as well live your life. The other part of their bravery is simple pragmatism:

“It is dangerous for us here in Nairobi, too,” he tells me. “Why not go even to Mogadishu? That’s where the message needs to be loudest.”

The rebels are already in retreat from the seaside capitol of Mogadishu after the African Union-backed Somali government forces finally got their shit together and reunited the city. Back in February, Shiine did an advanced scouting trip as a guest of Mogadishu’s mayor, Mohamed Nur (nicknamed “Tarzan”!).

The mayor’s office has been on a roll with good p.r. Rebels retreating, the city reuniting, and new pictures of kids back out on the ghost town riviera beach, that gorgeous waterfront which may one day be the “Dubrovnik” of Africa.

So the time is right for a big, badass hiphop concert for peace.

But even with Shiine beaming confidence, I can’t help but admit: how the fuck are we going to do this not only safely but logistically?

We have a few big organizations giving some start up funding, and a few mags and websites helping with public relations. Plus, the Somali musicians and cultural players are loving our project. Leaders in the diaspora like Salah Donyale, Aar Manta, Abbas Hirad, and Abdi Phenomenal have already agreed to form an alliance, maybe even join. But my head falls in my hands.

“We still have a big climb ahead,” I tell Shiine. Not only is there the cost of his band’s travel, venues, and pr, but we’re heading to one of the most dangerous cities in the world where people literally want to kill singers like him and kidnap white dudes like me, so we also have to cover two or three car loads of armed guards for every day outside of our walled compounds.

I’m about to tell him that I can’t do it, not afraid exactly, but exhausted. It’s not just this tour. My partners and I are also helping the Afghan rock fest make some connections in New York, producing other humanitarian media projects, and, hell, just trying to make rent. But Shiine, shining with his tough-sweet magic, just waves his little son’s hand at me.

“I have to show you something!” He picks up his laptop, walks through the room where his other family are watching the tube, and points the web cam at a wall of boxes. “We met another donor, someone who really believes in what we’re trying to do. They said, What equipment do you need to make the concert really great? I told them Mogadishu doesn’t have anything of high quality. I wrote a list of things in the store here in Nairobi. And they came with a truck.”

What the-? He crosses the room with his web cam. One of the big hurdles that had been stressing them out, and me as well, was how to get decent gear for the tour. And here, in a brilliant, wondrous flash, some huggable bastard went to the mall and filled a truck with new amplifiers, guitars, mics, drums, and a generator to donate to the tour.

I couldn’t help but laugh. That win smashed so much worry, at least for now. The band still has a long way to go, a lot of work ahead, and my partners and I will have to bust our asses to keep up and document the journey. Who knows if we’ll make it? Either way, Waayaha Cusub keeps performing, and I think I’ve finally finished fearing the worst. That small victory was a much needed re-charge.

If and when we do make it to the Somali capitol this fall to put on the biggest baddest concert the region has seen, one thing’s for sure. These guys are going to turn Mogadishu upside down.

If you want to follow, donate, or sponsor the Somali Sunrise concert tour and documentary as it evolves, follow and contact us via Live from Mogadishu on Facebook. To follow the Somali tour alongside the Afghan rock fest and other humanitarian and music projects more broadly, please check our partner org, Humanitarian Bazaar.

Tagged
Travel Tough Music in Tough Places
What did you think of this story?
Meh
Good
Awesome
✖
travelstoke
Download the mobile app
stoked by