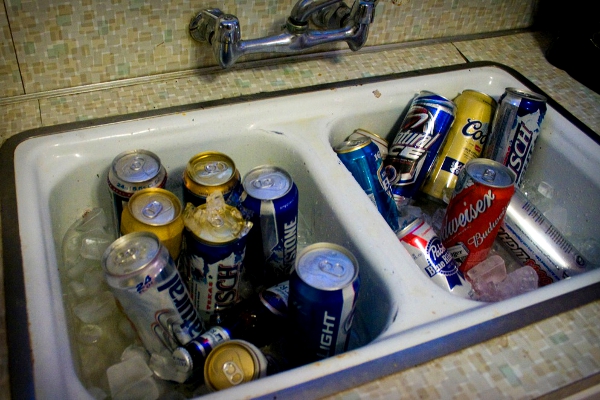 Matador Trips editor Hal Amen shares the infallible results from his ultra-scientific, triple-blind taste test experiment. They may surprise you.

As I walked out of the Fiesta Mart on 38th, I looked down into the plastic bag I carried, 16 shiny aluminum 24oz tallboy tops looking back at me. This whole taste test thing had just gotten a little too real. My stomach clenched.

I got a lot of great suggestions on which beers to include from the comments here: Introducing Matador’s “Best Worst Beer” Experiment. To be honest, I had no idea Schlitz was still “brewed.”

Based on these recommendations and plenty of personal experience, I chose a field of 16 shitty beers, focusing on what I felt were “American classics.” I stayed away from malt liquor. I didn’t even consider going the Chelada route. 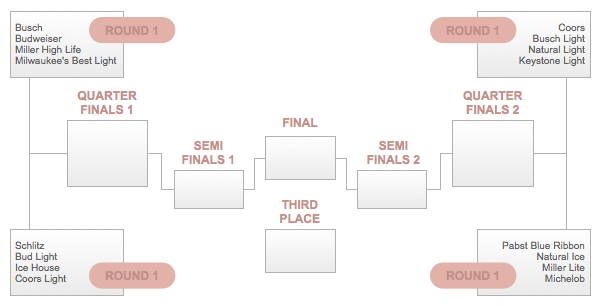 I gathered four distinguished (read: with extensive beer-demolishing experience) judges, including myself, and in round 1 each bracket was tasted by a single judge, with the worst two beers honored with a ticket to the quarterfinals.

The upsets started immediately. Budweiser was picked to go through over storied swill “The Beast,” Ice House lost out to Coors Light, and Natty Light was kept back while Coors Banquet Beer went through.

In a personal shocker, I later learned that Michelob Ultra, which I have on many occasions described as “not that bad,” was in my group and received my harshest critique (something along the lines of “vile piss”) in this blind taste scenario.

The results after round 1: 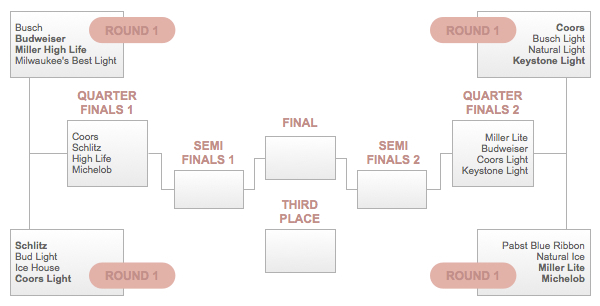 Here, judge #1 split off from the group to become the moderator, and the remaining three judges tasted everything going forward.

Quarterfinal 1 saw Schlitz and the High Life win out easily over contenders Coors and Michelob Ultra. In the second group of four, Keystone Light dodged a bullet while its counterparts from Miller and Coors advanced to head-to-head competition.

Things started to get icky at this point. Even with 8 beers to sample, they were so similarly foul that the judges had to take multiple sips from our big blue Solo cups to get an accurate result. I noticed — in my mouth at least — a very unpleasant and filmy taste starting to develop. 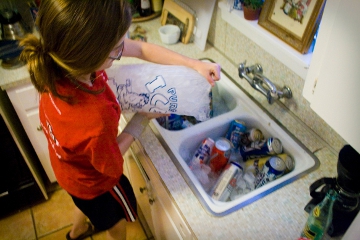 But we soldiered on. Head-to-head proved a bit less daunting, and first up was Schlitz v. Miller Lite. Once again, the favorite fell, and amid cries of disgust Miller was sent on to the finals.

Matchup 2 produced a similar result, with Coors Light being picked over the High Life. The stage was set.

We hadn’t come this far not to complete a proper ranking. Although, by this time we were feeling very “done.” After a quick sip, sip, confer, the runner-up results were finalized: 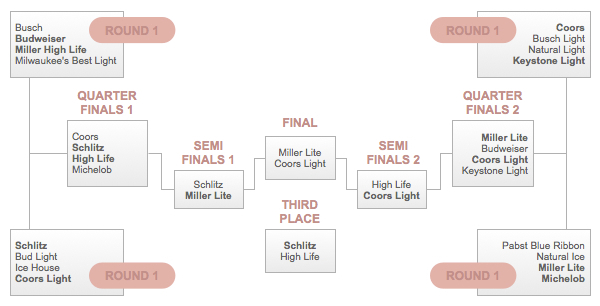 This was for the title. In both semifinal rounds, we had gone with the selection offering a subtle taste of chemical death over that which took the tart, putrid approach. So the two finalists were quite similar, quite toxic.

But it didn’t take many tastes (thankfully), for the supreme and most definitely worst beer in America to be chosen…

The boys from the Rockies have done it! Coors Light wins! 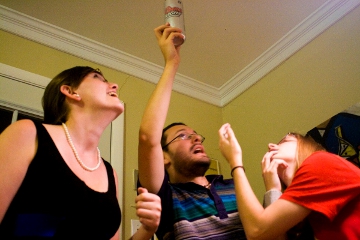 Oh, it was a hard-fought honor, to be sure. But the inventor of the “cold activated bottle” left nothing to chance. Coors Light combines all the watery goodness of true American panther piss, and adds a subtle dash of that unmistakable formaldehyde flavoring that gives it the edge.

Miller Lite gratefully accepted its second-place ranking, good sport — if not good brew — to the end.

Bonus: Least of the Worst

Maybe it was the suds talking, but all four judges were feeling pretty good after the final. So we decided to take the 8 beers that had been knocked out in round 1 and judge which we hated least.

I’ll spare the details, but the top four least worst beers in America ranking shocked the four of us:

I will never make fun of the Nat again.

A good science experiment must be replicable. Before you challenge these results, I encourage you to conduct your own taste test (observing the proper parameters moderation and common sense, of course). I’d love to hear how it turns out.