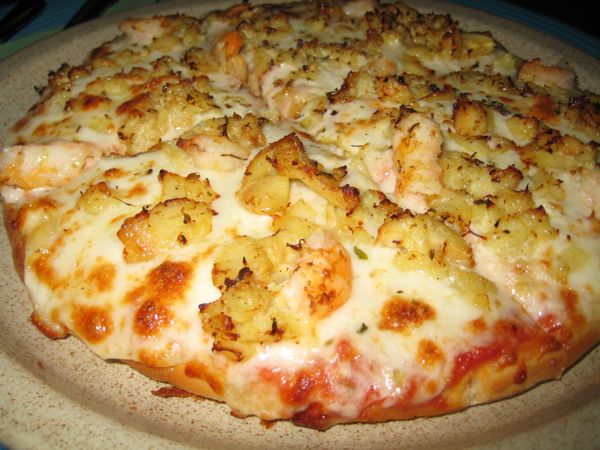 We received a picture of this pizza from Matador reader Pele Omori. Then we threw up.

The article was also translated into Spanish, causing me to become the epicenter of some kind of
food fight that’s been brewing in Buenos Aires. I generalized where I shouldn’t have and have promised that come January, when back in Argentina, I will point my mouth towards whatever pizza is suggested as good. I’ll be happy to eat my words – always have been.

One comment about the piece caught my eye. Pele Omori (of the foodie blog Hedonist Cat) recalled a pizza that she had had in Portugal, which I have since named The Baccalau Beast. One email later, I had a picture of this man-made abomination. I had to admit, it looked worse than anything I’d seen this year.

Taken at Papa Pizza in Evora, Portugal, The Baccalau Beast looks horrifying. For the uninitiated, baccalau is salted cod, a staple in the Portuguese diet. I’ve had two run-ins with this version of the fish and neither of them ended well. It is oily and yellow and almost seems uncooked even when it’s cooked. The texture must be close to that of human flesh. So, when I saw it on pizza I went fetal and started rocking in a corner.

We’ve had some great food pieces on Nights in the past few months, including Rev Dave Ciancio’s drool-able spread on big, beefy burgers. I’d like to throw this out there: If you have pictures and a hunger for food, we’d love to hear about it.

Best, worst, biggest, longest…we’re interested. Pop me an email with any and all ideas for food stories and I’d be more than happy to check it out. As long as it doesn’t involve baccalau and pizza. That’s just gross.