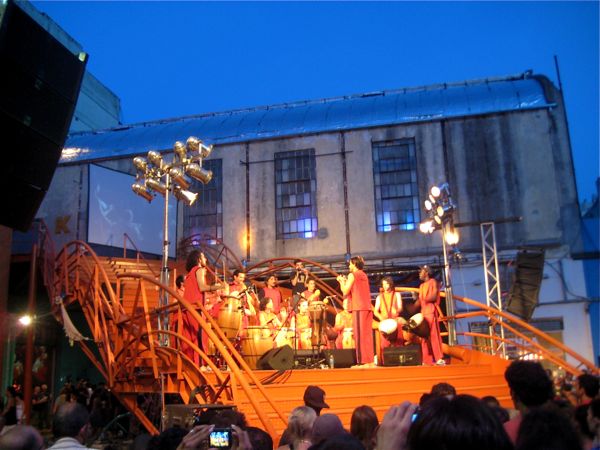 La Bomba de Tiempo’s weekly event at Konex is still the night to beat for both tourists and locals alike.

At the moment, Monday nights are sweltering. A line stretching around the block at Buenos Aires’ Konex venue is filled with people who will do just about anything to chill out, from guzzing tall bottles of water to popping one of the tallboys that the industrious locals have begun selling. By the time the crowd enters the venue an hour later, it’s a sweaty mess of people wondering just what they might be in for. 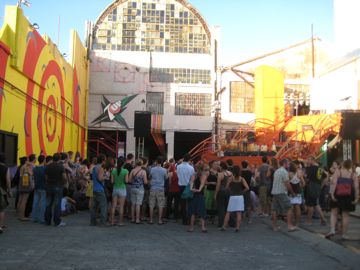 Konex is a large courtyard surrounded by wonderful, disjointed walls, one of which is covered by a mural of people at the sea. It feels like some kind of bombed out WW2 building, a space that might feel more at home in one of Berlin’s hipper zones, perhaps Friedrichshain. It would take a satanic ritual involving a slain goat to ruin the warm, happy vibe the the place gives off.

Each Monday, crowds gather around one central area in the complex to check out Buenos Aires’ most noted percussion group. The performance takes place on an orange ladder contraption, which looks like something used to pick hard-to-reach fruit.

The first half of the show is La Bomba de Tiempo’s time to shine, first organizing a beat and then working it through its paces for about 45 minutes. The dozen or so drummers do a great job of not trollopping off into The Land Of Hippies and pull together a sound that is exciting, refreshing and seducing. 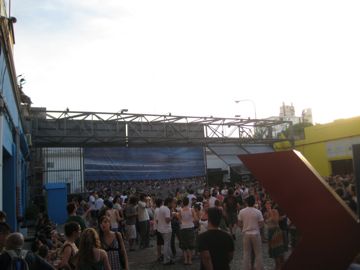 By 9pm the show is in full force. Lines for beer (one liter only) are packed. The sweet reek of weed and rolling paper permeates the perimeter. A woman with dreads dances wildly with a cigarette, dangerously close to her companions – she looks like a medusa with a nicotine habit.

Everywhere people are ‘air drumming’ and trying to find the beat, some with more success than others. Amidst the music, there is an unbelieveable amount of gossip about who in the crowd is hot, and who might take one of those sexy people home. Backpackers girls are legging up with knowing local men, an event signaling that some fireworks just might happen after the gig.

The whole thing lifts off with the arrival of the night’s guest, which changes each week. Sometimes it’s a cellist, sometimes a DJ. Usually a new conductor with switch in and it definitely feels like the energy explodes at this point. By now, most of Konex’s occupents are feeling no pain. 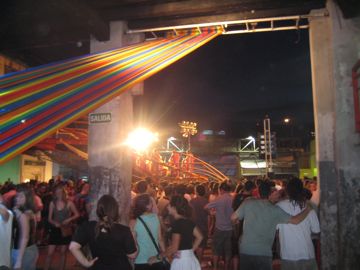 Hardcore dancing kicks in, as do whatever drugs have been taken. For the next hour it’s a swirl of music and euphoria, feeling nothing like the dudes who play their congas on the beach near your house.

Over the course of three hours it will feel more like you’ve been to an excellent party than a drum circle. This is not to say that the music isn’t important – it is. It’s more a testament to why people keep coming back to Konex every Monday. This might be the most fun drum circle on Earth.

Into percussion? Be sure to check out Be-Dom, Portugal’s Percussion-Mad Sextuplet. If you didn’t see last #MusicMonday’s 50 Music Sites That Matter then do yourself a favor and check it out – it’s the perfect one-stop for music junkies.