I’M GETTING OLD. A few weeks ago I actually said the words “ooh, it’s a lovely day for drying.” Out loud. I do ironing and remember to water houseplants. I pay bills and go on nice weekends away to the Catalan Pyrenees and get excited about cake shops. I actually have a potato peeler on my Amazon wishlist. I have turned into my mother.

It’s been ages since I’ve been backpacking. So when St Christopher’s offered me the chance to write about their new hostel in Barcelona, I jumped at the chance to prove I was still an ‘über-traveller’. Armed with a padlock, torch, ear plugs, and flip-flops, I marched into battle — right after I put the washing out and had a nap.

Things do not start well. There’s no record of my booking. The manager is brought out and phone calls are made. Eventually, I am in. I’m given my key card and directed to the lift. I press the button and the lift starts to move. Then the lights go out. A power cut. I am claustrophobic. I start to yelp quietly to myself and fumble around for the emergency button. Just as I begin to wonder if I’ll see my nearest and dearest again, the doors spring open and I find myself on the first floor in the breakfast room. All the lights are on and music is playing. I take the stairs.

After huffing and puffing up to the sixth floor, I find my key card doesn’t work and I have to go back downstairs. As the manager looks at me with pity in his eyes, I watch a girl effortlessly operate the lift with a swipe of her key card. There was no power cut, I am just rubbish. I don’t just suck as a traveller these days, I suck at life too. At least that’s what I assume the manager is thinking as he escorts me upstairs and shows me how doors work. 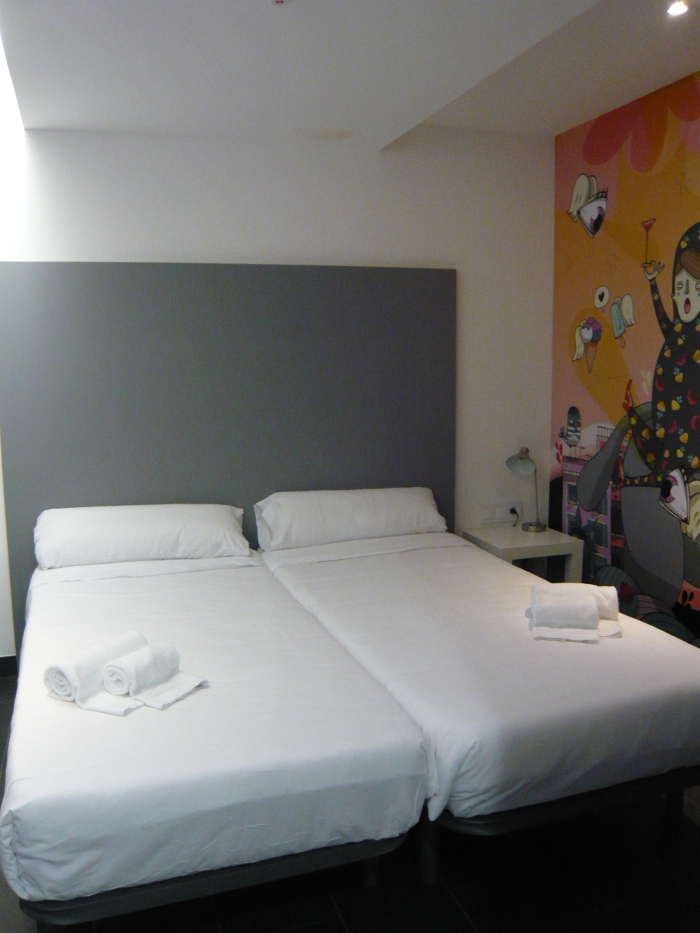 This, though, is something else. Despite being only a hop and a skip from Plaça Catalunya, the central square of Barcelona, there’s just a distant hum of traffic to be heard. The room is spotless. There are towels and tiny complimentary tubes of shower gel and shampoo. I even have a balcony and a bright but rather odd mural on the bedroom wall. I could stay here all day, but I reluctantly get up. I have a mission: mingling.

Outside my room there’s a lounge area with a leather sofa, lamp, and dining table. It would be a fine place to make a nice cup of tea, but sadly the cubby in the corner that desperately wants to be a kitchen, isn’t. In fact, there’s no kitchen or cosy DVD room anywhere at St Christopher’s, which must be a bummer for long-term backpackers on a serious budget.

What there is, though, is a sports bar. Belushi’s. This is hostelling 2012 style. The place is like a vast, modern student union bar. There’s tons of comfy seating, a bank of pay-as-you-go computer terminals, pretty outdoor smoking areas, a pool table, and giant screens showing rugby, football, and motor racing.

Hostelling seems to have changed a bit since my day, or at least it has here. I don’t see a single person rabidly thumbing through a Lonely Planet or stumbling drunkenly under the weight of a giant backpack. Everyone seems to be fiddling about with smartphones and iPads or asking the reception staff about transport to the airport.

I am not mingling. I’m wandering around with a shy smile on my face like a librarian at a Christmas party. I get a drink and hope they won’t call the police and have me arrested for acting like a smiley freak. I bite the bullet and start chatting to Alex, a solo traveller from Australia who’s spending a week of his 5-month trip in Barcelona. I ask him about the dorm rooms. His face lights up.

“This is one of the best hostels I’ve ever stayed in,” he says. “The beds have curtains, a light, and a plug socket, and the lockers are enormous.” After running through all the options in my head of how I can ask to see his bed without it sounding like I want to jump his young Antipodean bones, I keep shtum. 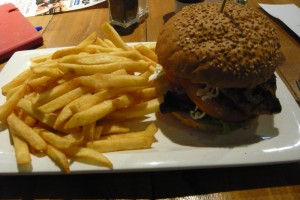 As Alex wanders into the night for paella and pints, I order dinner at the bar. Generally, bar staff in Barcelona are lugubrious, sour-faced old men who repay you for having the audacity to darken their doors by taking half an hour to serve you and spitting in your beer. Belushi’s have the friendliest and fastest bar staff I’ve seen in the city. I order the 8-euro Cajun chicken burger and it arrives, tasty and tender, with a gut-busting mountain of chips.

The bar is filling up. It’s early but already people are taking full advantage of the €9.90 jugs of sangria and double whiskies for a fiver. Two guys nearly salivate onto their table as a sassy redhead struts past, distracting them from the business of watching Malaga stuff Valencia. Across the room, two American girls teach a German guy how to play Shithead. He looks scared.

As the night wears on and I sink a few more Cruzcampos, I get better at mingling. Everyone keeps telling me about their bed curtains and how cool they are. A Canadian guy called Wade tells me that on this trip he arrived in New York two days before Hurricane Sandy, and in Tel Aviv the day of a rocket attack on the city. If Barcelona has burnt to the ground by the time you read this, or been invaded by a plague of giant locusts, you heard it here first, people: Wade from Vancouver is your man. 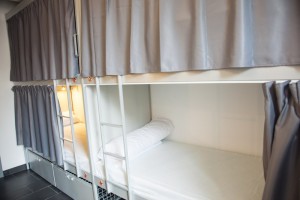 The following morning, I drag myself to breakfast. It’s a basic affair, and the queue for the toaster soon starts to snake around the room. Outside, some of my cohorts on this morning’s free walking tour in English look as if they spent the first half of the night drinking pints of vodka and the second half getting up to mischief behind a dorm bed curtain. A group of girls pop aspirins with their skinny flavoured lattes and groan.

The walking tour is a treat. Led by a knowledgeable kiwi, our international group are fed tidbits of Catalan history and culture as we wind our way around the old town. We learn that Picasso had an absinthe problem, Gaudí looked like a tramp, and that Dalí was never happier than when he was frolicking naked on the beach smothered in honey. “Aren’t we all dear,” mutters one wry soul.

The tour is a great chance to get chatting, and I find that people are generally delighted with both St Christopher’s and Barcelona. There are a few complaints about the hostel’s fluctuating Ryanair-like room prices, and having to pay for extras like computer terminals and after-checkout locker rental, but generally the place, and its value-for-money dorm rooms, gets a massive thumbs up.

For me, I’m just happy to discover that, although I might find everyday things like lifts and doors perplexing, I’m not yet too old for hostelling. Not this hostel anyway.

[Editor’s note: Natasha’s visit was arranged and paid for by St Christopher’s Barcelona.]