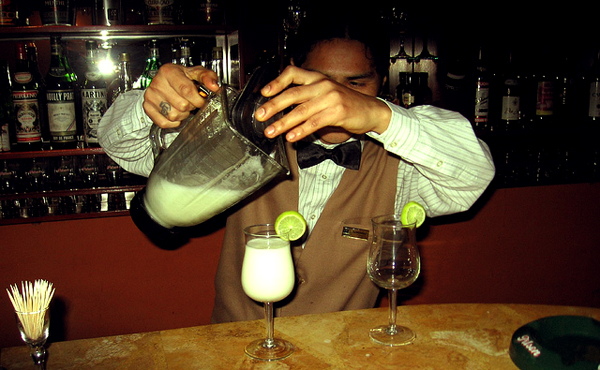 If you travel to Peru and don’t come across a pisco sour, you might be in the wrong country.

I spent three months working with a nonprofit organization outside of Huaraz, Peru, and quickly learned pisco sours are an important part of Peruvian nightlife. From Huaraz to Aguas Calientes, promotional staff from restaurants and bars would entice me into their establishments with a free pisco sour (two if I haggled).

But there’s more to Peruvian drinks than pisco.

For the Jetlagged: Pisco Sour

My first day in Peru, I had a bad case of jetlag. After a redeye flight from New York with the air conditioning on full blast, I spent two minutes in the hostel before I crashed and slept the day away. Luckily, when I woke up in time for dinner, a pisco sour snapped me out of my foggy daze.

A pisco sour, made with lime juice, sugar syrup, egg white, and pisco, was the perfect cocktail to ward off jetlag on that first day. The Spaniards introduced grapes to colonial Peru, but when the King of Spain outlawed wine, they invented a distilled wine brandy and named it pisco. Jetlagged travelers and Peruvian nationals alike have been enjoying it ever since. It’s also popular in Chile. 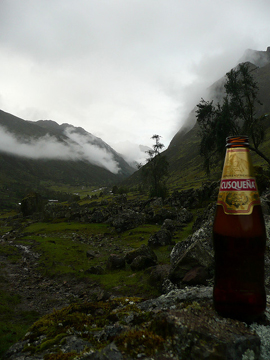 Don’t expect any Coronas around these parts. Peruvian beer has a reputation all its own. For a classic experience, Pilsen offers a 147 year old brand of “quality and tradition.” With its iconic bottles and light flavor, Cristal claims to be “the beer of Peru.”

Yet most of the beer I’ve tried in Peru has been very dark. In fact, at a birthday party in Huaraz, the entire family mixed their dark Cusquena Malta with Coca Cola to make it sweeter. If you’re looking for something out of the ordinary, Cusquena Red Lager is a limited edition treat. It’s a mild lager with a slightly sweet edge. Don’t let the rosy hue blind you; this baby packs a punch.

For the Romantic: Wine

When I think of wine, I think of Italy, France, and California. But wine is Peru’s less famous pisco counterpart. When I took a bus from Lima to Huaraz, I was offered a choice between soda or wine. I figured cheap wine from the bus company would be only mildly palatable, but it was actually light and refreshing.

When I visited Bodega Vista Alegre in Ica, I learned that where there’s pisco, there’s wine. Pisco is essentially a stronger form of wine, and there are many artisan vineyards throughout southern Peru.

At the bodega, we sampled a light rose wine (Vino Rose Semi-Seco from the Vinos Vista Alegre Classic Collection), and several semi-dry varieties. At 18 soles or about $6 US a bottle, I bought a few well-packaged varieties to take home.

For the Designated Driver: Inca Kola 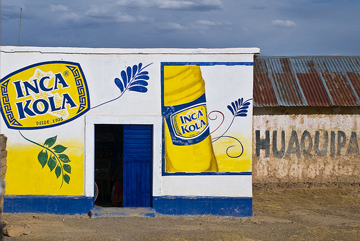 In some countries, it’s either Pepsi or Coke. In Peru, it’s Inca Kola or Coca Cola.

This florescent yellow bubble-gum flavored soda is considered “el sabor de Peru” (the taste of Peru), but it’s sold in the United States and Canada with the label Golden Kola. A taxi driver in Lima who used to work in Ohio told me you can buy it at Rite Aid, but I haven’t seen it yet. 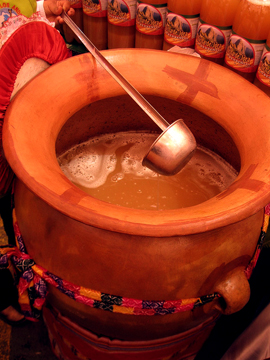 There are many different ways to prepare chicha throughout Latin America, but it’s always made with corn. The Peruvian varieties include chicha de jora and chicha morada.

Chicha de jora is prepared with fermented yellow maize and tastes like spiked apple cider. I tried this in a small village right after the local elections closed.

One family killed a cow to celebrate the political year, and all the townsmen shared glasses of chicha de jora.

Chicha morada is non-alcoholic and made with purple maize, pineapple, cinnamon, sugar, and lemon. I think the morada (purple) version looks and tastes like a thick grape Kool Aid.

For the Hungover: Té de Coca

Coca tea is an made by boiling coca leaves and sugar. This tea, also known as mate de coca, is popular in the Andean region. 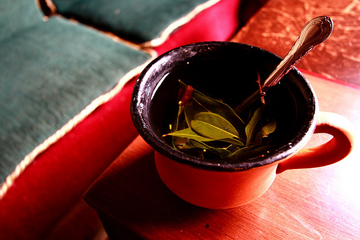 Yes, the coca plant is used to make cocaine, but the leaf itself is only a mild stimulant; coca leaves have been used for their medicinal properties for centuries.

According to the Transnational Institute, “When chewed, coca…suppresses hunger, thirst, pain, and fatigue. It helps overcome altitude sickness.” I’ve had té de coca several times when I felt nauseous from the altitude or had a sore throat from nights up in the mountains; it’s also a great pick-me-up after a long night out.

Check out Matador Network’s Peru Focus Page to find information about the best time to visit, how to score an internship, and how to trek the Inca trail.

For more on chicha and other strange drinks, have a look at You Gonna Drink That? 5 Odd Libations from Around the World.

What did you think of this article?
Meh
Good
Awesome
Bookmark
Posted In
Travel
Destinations
Peru