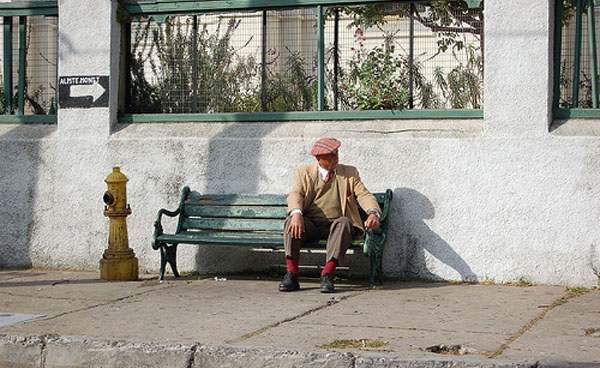 Dine with Chileans and you’d be forgiven for thinking that they can’t live without avocados or ketchup. If you look beyond the loathsome burger joints of the capital, you’ll find a staggering wealth of cheap, wholesome food that puts other countries to shame.

Chile’s unusual geography and long straggly coast, means fish, meat, fruit and vegetables are all in plentiful supply. Vegetarians will have an easier time of it than in neighbouring Argentina and although Chile is more expensive than Peru or Bolivia, bargains can be found at lunchtime wherever you see the ‘menu del dia’ sign. 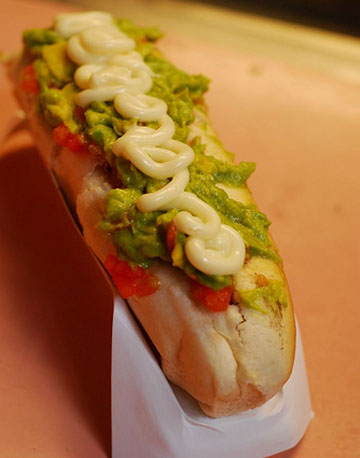 Despite the name, hotdogs don’t get more Chilean than this. Smothered in chopped tomato, mashed avocado and about 3 pints of mayonnaise this is Chile’s fast food of choice. Lose the avocado and you’ve got yourself a completo. Many swear by the Santiago chain Dominó.

Sopapillas
If you’re got the munchies after a night out and aren’t counting your calories, sopapillas are just the thing. Pumpkin and flour are shaped into patties before being deep fried and slathered with pebre, a delicious sauce of tomatoes, onion, garlic, chilli, coriander and lemon that Chileans just can’t live without. Cheap as chips and sold on street corners everywhere, there’s also a sweet version served with sugary Chancaca sauce. 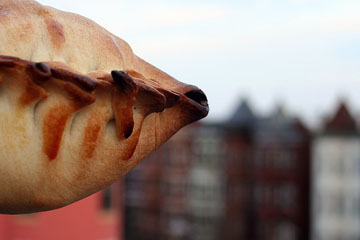 Popular all over South America, empanadas are pastry-wrapped portable pies similar to an English Cornish Pasty. Baked or fried and with a selection of fillings, meat based Pino is the filling of choice for locals. Aficionados head to Pomaire (a small village famous for its pottery just outside Santiago) for the stomach-expanding ½ kilo version. The best in the land (and write in if I’m wrong) are at Los Hornos de Rio Seco in Cajón del Maipo’s San Alfonso.

Cazuela de Ave
A stalwart during the winter months, Cazuela is a rich, soupy casserole full of goodness that’s perfect for dunking your bread into. Chicken on the bone is cooked in a nutritious stock with hunks of pumpkin, potato, carrot and corn on the cob. True carnivores can check out the beef version, Cazuela de Vacuno. 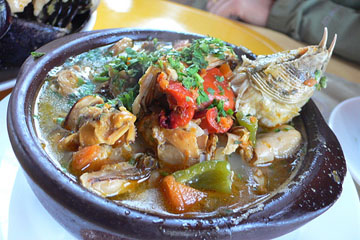 Seafood fans will think they’ve died and gone to heaven when they see this. Traditionally served in an earthenware bowl, every conceivable type of shellfish is thrown into this traditional seafood stew along with herbs, spices, garlic and plenty of coriander. Best eaten in the Southern coastal towns, it’s pretty darn good at El Rincón del Pancho in Valparaiso’s Mercado Cardonal too.

Minced meat, chicken, raisins, black olives and eggs are crammed into a pie dish and then topped with a layer of creamy mashed sweetcorn and a sprinkle of sugar. It may sound weird but it tastes delicious. Every Chilean mum will tell you that hers is the best. 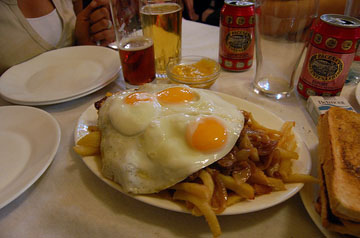 Ooh this is dirty and wrong but it feels so right. Usually big enough for two, a massive plate of greasy chips is covered in fried strips of steak, onion and scrambled egg. Your heart will hate you but your taste buds will be begging for more. Studenty Casino Social J Cruz in Valparaiso serves the best.

Curanto
The pride of the island of Chiloé, Curanto is traditionally prepared over hot stones in a hole in the ground. Shellfish, meat, potatoes, vegetables and potato bread and covered with nalca (Chilean rhubarb leaves) and left to cook for an hour or so while everyone knocks back a few glasses of red wine. 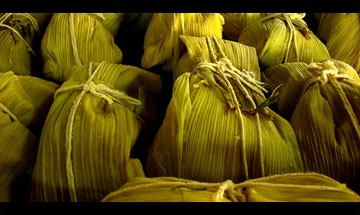 Summer is the best time for veggies to come to Chile, if only to try the humitas. Made from parcels of fresh corn, onion, basil and butter, they are wrapped in corn husks and then baked or boiled. Served with a sprinkle of sugar and a tomato and onion salad (Chilena), these babies are deliciously, deceptively filling.

Chilean country-folk have a knack for cooking beans and this dish is the pick of the bunch. A warming stew made from fresh beans, pumpkin, ground corn, onion, garlic and cumin, this ‘poor man’s food’ is proof that you don’t need to be rich to eat well at the bottom of the world. 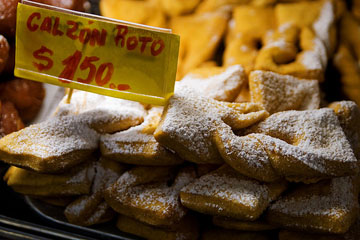 Ok, so there are better desserts than this, but none with a name this good. A flat fried pastry twisted into shape and topped with icing sugar, sweet-toothed Chileans can’t resist them. Look out for the soft round pastry sandwiches filled with gooey caramel known as alfajores too. They are guaranteed to liven up long bus journeys and make great presents.

Dig food from South America? Don’t miss our Guide To Eating In Brazil and also take a gander at our Ceviche Primer. Those who over-indulge might follow Matador Nights’ Tom Gates as he eats his way through the world, with recent stops in Berlin and Bangkok.

Chile is reopening to international tourists at the end of November