View all travel news
Top Countries
Top CitiesView All Destinations
Trending Regions
Trending Cities
Load More
“Shocked shocked! Who is behind this trail of destruction? The extremist rebels are. They galvanize people on the street for their wicked cause. They pretend to be pious but wield machetes…” ~ lyrics from “Yaabka Al Shabab (Refuse the Rebels)” by Waayaha Cusub (New Era)

MANY SAY WHEN YOUR BACK’S AGAINST THE WALL and you feel like the world is against you, that is when you fight the hardest to live and to thrive. Nowhere have I found a more awe-inspiring example of this survival instinct than with the Somali hiphop and RnB collective Waayaha Cusub (New Era). These past months, I’ve been getting to know the group as they plan their journey to lead one of the most ambitious and dangerous concert tours in the world, performing across their troubled home country of Somalia to the newly reunited capital, Mogadishu.

Brewing hybrid new genres that combine hiphop, RnB, and Afrobeat, with realist but hopeful lyrics in Somali, Swahili, and English, Waayaha Cusub are made up mostly of war refugees turned singers now based in Nairobi, Kenya, some of whom have lost everything if not just their country, Somalia. They already tour Africa based out of their own music store in Nairobi’s Eastleigh neighborhood, playing monthly in Nairobi, and then hopping every few months to Djibouti, Jijiga, Kigali, or other nearby cities. If you’re ever in Nairobi, find a driver or guide to Eastleigh and once there ask anyone for the Waayaha Cusub shop and they’ll point you to a yellow arcade where you can discover their videos and cds and maybe even meet one of their alumni in person.

Longtime global music fans might see beyond their African Horn sound to find flavors resembling Wu Tang, Arrested Development, or even Tupac in their music and style. But while so many Western musicians from hiphop to metal to hard rock to punk around the world have banked on their reputations for surviving the streets, here is a group that, more than any other, literally survived a war with music. 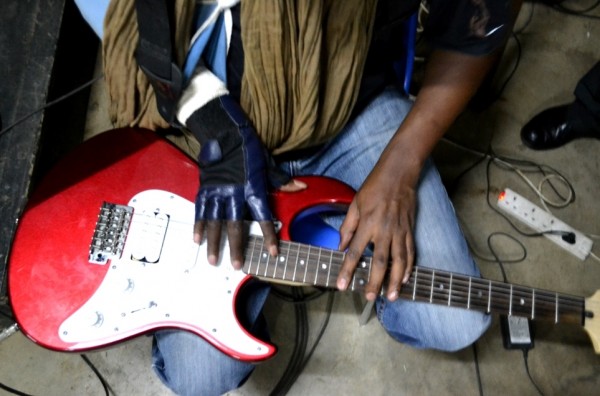 “Our concept is to create a waayaha cusub, which means ‘new era,’ for all Somalis,” Shiine says. “People can unite the same way we became brothers. Often people from different regions don’t even know each other, but have animosity towards one another. But we try to cultivate confidence and brotherhood among those who are interested in conflict. We want to enlighten them and truly rescue these people by using our voices and music to convey our message.”

Back in 2008, after extremists encouraged by the radical Somali rebel group Al Shabab murdered several well-known Somali singers, then hunted down and shot Shiine several times, warning him and his group to stop making music, Shiine literally climbed out of the hospital bed writing new songs to persuade young would-be fighters to peacefully resist the rebels.

Other members of the collective, like Somali superstar Digriyo Abdi, have also survived violent attacks and threats. Shiine’s wife, sultry music icon Falis Abdi, with whom he has two sweet kids, also champions this defiance of extremism sung through music, despite the risks. And it has not only won them threats and criticism from radicals, but glowing adoration from fans of their music.

My decision to throw in my fate with Shiine, the band, and their allies, to help them build a coalition and document their journey all the way to Mogadishu, came back in November 2011. After helping filmmaker Travis Beard and his team produce Sound Central, Afghanistan’s first regional rock festival and the world’s first “stealth” music festival in September and October, I had the opportunity to go back to Somalia with my organization, Humanitarian Bazaar, to film some documentary for the aid agency Adeso.

For over a year, I had been wanting to interview, if not produce a project with, Waayaha Cusub after reading about them in the press. Like my other work producing creative stories and projects on how people survive war, disaster, and the pursuit of peace, a relationship with them could, I hoped, turn into something not just full of cool music, but also more honestly humanitarian than most other music for peace projects, because they were themselves local musicians defying violent threats to woo would-be fighters away from the gun.

Through a Somali journalist friend, I finally arranged to meet the band in downtown Nairobi after I’d finished the latest cross-country trip in northern Somalia. Although I was exhausted, I had to admit that traveling in Somalia was not all gloom and doom, and rumor had it that government forces had a good chance to reunite Mogadishu, which they did the following month.

Shiine met me at a European cafe and, without a word, led me down a hallway to another hallway and then down some stairs into the basement of a building. Where was he taking me? The door opened up into a rehearsal space filled with Waayaha Cusub singers Digriyo Abdi, Lixle Muhadin, Burhan Ahmed Yare, and their Kenyan collaborating band, Afro-Simba. Without even saying hello, the band launched into a series of songs they were already planning to rehearse, top among them their anthem “Kaca Kaca Kaca Wada Kaca.” It rings the message of “Stand Up for Your Rights!”

Once I established that I had worked in Somalia, knew a few people in common, and had been part of the Afghan rock festival, the singers invited me to walk to a Somali restaurant where we shared a group platter of spaghetti with goat sauce. No forks, just hands. Then at coffee at the Regency Hotel, where all the really meaningful cultural relationships are made among Somali expats, we got to talking about their plans to make a second tour to Somalia, but with more dates and a climactic, historic concert in the capital.

Given that extremist rebels had banned music in their part of the country and then hunted musicians including Shiine, how would they put on a concert safely? With the national theater being rebuilt but still hit by suicide bombers, what venue could be secured to keep the crowd safe? Shiine and his allies had answers, and backup options. Safety would be number one. But they were absolutely sure that people in Mogadishu, including the mayor himself, wanted — demanded — that they come to perform.

Who else would perform on such a tour? Would it include celebrity artists? Over the next months, Waayaha Cusub, their allies, and I reached out to their former members like Dalmar Yare, other well-known singers like Aar Manta (London), Farxiya Habaryare (Minneapolis), and Abdi Phenomenal (Minneapolis), songwriter / producer Salah Donyale of Somali Public Radio, event producer Abbas Hirad of Kilimanjaro Events, and Waayaha Cusub’s original tour manager, Jama Abshir of Radio Daljir.

Pretty soon, allies across the Somali diaspora were on board, and it was just a matter of logistics in planning the core series of events. Bigger artists would be invited as soon as the foundation was forged. The date for the tour was set for early September.

That first night I met Shiine and his fellow singers, I discovered a rare passion of cause. I had never seen anything like it in any other band. This wasn’t just a family of pop icons flashing signs and raking in cash. They were actually a rarely paid, often threatened collection of friends, bonded through collective trauma and promising to each other to sacrifice everything to help their people re-imagine what a peaceful Somalia will be like.

[Thanks to James Quest for video support, Abbas Hirad for translating lyrics and quote, and many others thanked in the video and on our website.]

Tagged
Travel Somalia Tough Music in Tough Places
What did you think of this story?
Meh
Good
Awesome
✖
travelstoke
Download the mobile app
stoked by