14:22 Mar 7, 2018
Top Countries
Top CitiesView All Destinations
Trending Countries
Trending Cities
Load More
Alaska‘s got a lot to offer the beer enthusiast. Bars and restaurants across the state, down to the lowliest chain motel lounge or roadside diner, have embraced the local breweries to an extent I’ve never seen elsewhere. Kiss Coors Light and Budweiser goodbye – here’s your guide to the fermented delights of the 49th state.

Midnight Sun Brewing Co. is the oldest and probably the most envelope-pushing of Anchorage’s four microbreweries. You can drink on-site at their South Anchorage location or buy bottles and growlers to go; Midnight Sun also offers free tours of the brewery every Thursday at 6pm.

The specialty at Glacier Brewhouse is a line of oak-aged beers: brews that have been aged in wood barrels previously used to create whiskeys and wines. The brewery/restaurant is housed in a beautiful, large space in downtown Anchorage, and the food is tasty too.

Try: The Beam Porter, a rich, dark, flavorful beer aged in Jim Beam barrels or – for something stronger – any of the annual Big Woody barley wines, which smell like a distillery and clock in around 10% alcohol.

Moose’s Tooth Brewing Co. is the only one of the Anchorage breweries whose pub is separate from its brewing location. Moose’s Tooth Pub and Pizzeria, in Midtown Anchorage, is always jam-packed with locals looking for their favorite pizzas. Expect to wait for a table, or join the separate line-up and grab a growler to go.

Try: The Hard Apple Ale, not too sweet and goes down oh-so easily. 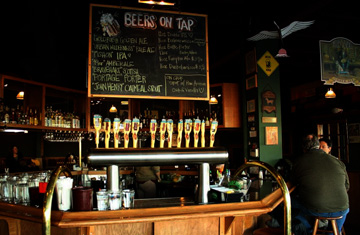 Sleeping Lady Brewing Co. brews are served up at the Snow Goose restaurant in downtown Anchorage: check out the big mountain views across Cook Inlet from the upstairs pub and patio. The Snow Goose also houses a theater space and hosts regular special events.

Try: The light and smooth Berlinerweisse, with a choice of blueberry or raspberry extract thrown in.

Other Beer Spots in Anchorage

Anchorage is also home to a handful of bars that don’t brew their own stuff but are nonetheless extraordinarily serious about beer. First on the list is Humpy’s Great Alaskan Alehouse, a downtown spot with 40+ taps (the most in Alaska) and a menu of Alaskan, American and overseas beers that changes daily. 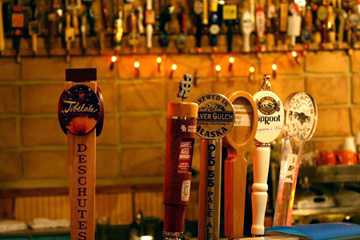 In Midtown, Café Amsterdam has a good array of local microbrews on tap and a huge list of (mostly) European beers in bottles. Nearby, Tap Root has 24 beers on tap and regular live music. Both Café Amsterdam and Tap Root are good bets if you’re interested in tasting the local meads produced at Anchorage’s Celestial Meads and Ring of Fire Meadery in Homer.

The big kahuna of Alaskan brewing is Alaskan Brewing Co. Alaskan’s been going strong since the ‘80s and its flagship Alaskan Amber is the closest thing to a standard, find-it-anywhere draft option you’ll get in the state. There are free tours and a tasting bar at the brewery in Juneau, or you can pick up supplies for your own sampling session at any liquor store in Alaska.

A ferry ride or a short flight north of Juneau, Skagway Brewing Co. is a personal favorite of mine. Try the Spruce Tip Ale and the brewpub’s rich and decadent mac’n’cheese. Haines Brewing Co. and Sitka’s Baranof Island Brewing Co. round out the Southeast Alaskan breweries, though there is apparently another in the works in Ketchikan. 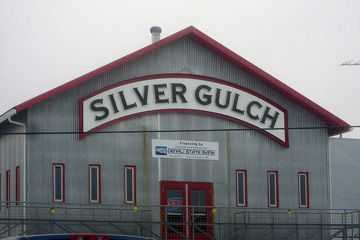 Try the Red Knot Scottish, Homer’s malty amber, or Kenai’s filling Breakfast Beer, or the fruity Farmer’s Friend at Saint Elias Brewing. And if you make it south of the peninsula, Kodiak Island Brewing Co. awaits.

Finally, the Alaskan interior is home to a couple of breweries: newcomer Denali Brewing Co. operates out of Talkeetna, in the shadow of Mt. McKinley, while Silver Gulch Brewing and Bottling Co. is based just outside of Fairbanks – at more than 64°north of the Equator it’s North America’s northernmost brewery.

This year, the January festival hosted more than 70 breweries from Alaska, the rest of the United States, Canada and Europe. It spans several sessions over three days, and includes special events and lectures for serious connoisseurs – for a big-time beer enthusiast, it might warrant a trip all on its own. The May festival in Haines, on the other hand, is just a single afternoon session featuring substantially fewer brewers and a much more laid-back vibe.

Still, like every other brewery, pub and event featured in this guide, it offers a chance to get down and dirty with Alaska’s finest craft beers – and, while I’m not much for bucket lists, that’s something I think every serious beer-traveler should make time for.

Disclosure: During my Anchorage research, the visit to Moose’s Tooth Pub and Pizzeria was sponsored by the Alaska Travel Industry Association. I also received invaluable pre-trip planning help from the ATIA and the Anchorage Convention and Visitors’ Bureau. All other beer consumption, in Anchorage and elsewhere, was on my own time/dime.

For ideas about what to do in Alaska, including how to get work on a fishing boat, we invite you to check out Matador’s Alaska focus page.

And for more beer, get a load of Matador Nights’ beer archive.

I felt safer traveling to Aruba during the pandemic than I have in the United States in months
Americans are rushing to buy a second passport, and here’s what it takes
Motels are making a huge comeback, and these are 10 of the coolest in the US
How to choose between an RV or van for your next big road trip
Everything Americans need to know about traveling to Mexico right now

Fairbanks, Alaska, is the best place in the US to catch the northern lights

Take a reindeer yoga class at this ranch in Alaska

Alaska is the sustainable fishing model the world needs

How to see Denali National Park by bus in one day