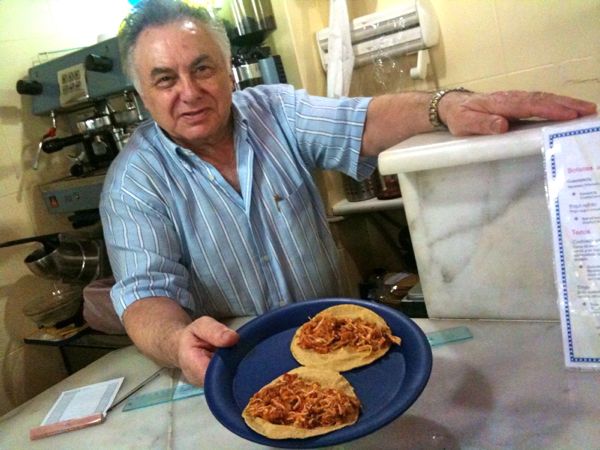 Tacos so good you’d think they from a Mexican street vendor, even if you are in Madrid.

It wasn’t in a guidebook and it wasn’t on a map, but I saw it while walking towards the Opera metro and decided to give it a shot. I’d eaten some tourist-ready, drab Mexican in Madrid before, yet this near-dive joint looked promising. In the way that only near-dive joints can.

OK, so maybe that’s a bit much, but that’s how the food hit me. Why? Because somehow the concept of a cheap, simple taco has become bastardized as the recipe goes around the world. These were the real thing, not a Spanish approximation of what a Taco Bell-eatin’ American would like.

There were only three filling choices as far as I was concerned; a thick, smoky Pollo Mole, a spicy/sweet Rojo with pumpkin seed and one hell of a Cochinita Pibil (a citrus-soaked pork). I’ve since had those three tacos five times, making excuses to use Madrid as a hub on trips through Spain. I have gone to surprising lengths to have their taste sensations put my buds in a sleeper hold. 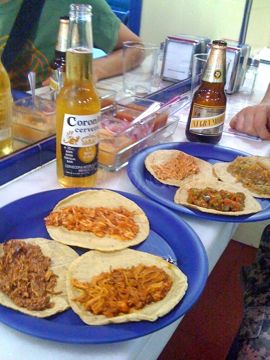 The tacos are prepared before your eyes, right at the eight seat bar, inside a room that couldn’t fit more than 20 people at capacity. The fillings are pulled from refrigerated Tupperware and combined with hotplate-warmed tortillas.

The guys who work here are happy and charming, almost bashful that I could love their food enough to come back for it twice. They definitely don’t get many English speakers. I’ve never seen the place without at least ten people inside, mostly local Spanish foodies who know what great Mexican food tastes like.

At €1.50 a taco, it’s among Madrid’s best bargains. The €5 margaritas are freshly prepared and not from a mix – they rival the food in authenticity.

Tom Gates travels and eats. He’s managed to find authentic italian food in Bangkok and is rather opinionated about pizza . He has a history of binge eating, as documented in pieces about Berlin and Buenos Aires.