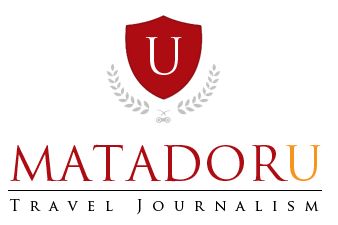 The concepts described here are discussed in detail in the travel writing program at MatadorU.

ON ONE HAND it’s easy to dismiss content like the recent Overrated Destinations piece on Huffington Post, to chalk up the massive sheeple response (nearly 50k likes on FB) to people who find this kind of article witty and accessible. I get it. In the scheme of things it’s no big deal. It’s a pageview-grab for Landsel and HuffPo. It’s a nice usage of “negativity bias,” a classic psychological trick that says people respond more to the negative than the positive.

But I can’t help feeling there’s something pernicious about it all, that it has a shitty effect on the way people travel, on the way they “see” place. Each of the locales the author denigrates has people and culture that have been around a long time before this article came out, and will be there a long time after it’s gone. It’s not all about price and “ease,” as the author might have you believe, but recognizing other people and places for what they are, not just what they “offer.”

What’s surprising is how Landsel’s entire piece is a contradiction of its own opening paragraphs, and yet everyone — beginning with the author himself — seems to miss this. Here’s how the piece begins:

Have you ever traveled somewhere that everyone told you was the absolute best, only to find yourself wondering: Is that all there is?

It happens. Sometimes, the destination in question is trading on a dated reputation it no longer deserves. Other times, you’ve fallen victim to hype, manufactured by the travel industry, gleefully perpetrated by those whose job it is to report objectively. The end result? You’ve now wasted precious vacation time and money.

Here are ten overrated places I’ve encountered, some all too frequently, during nearly fifteen years as a travel writer. If I never see any of them again, I won’t mind at all.

One thing I do agree with here is that so much travel writing is indeed hype, “manufactured by the travel industry, perpetrated by those whose job it is to report objectively.” That’s dead on. But what David Landsel apparently fails to grasp is that the ethos of his entire piece, from the rhetorical structure of the language, to the format, to the way places and cultures are reduced, stereotyped, or commodified is itself a “product” of the travel industry, a “victim” of the hype.

In other words, he either a) unwittingly advances the same mindset that leads to “overrating,” to creating false notions and preconceptions of place, or b) buys into this mentality and is simply going along with it, perpetuating it, “gleefully” adding his choices into the mix.

There’s a Yiddish saying about not digging your furrows so deep you can’t see over the tops. As Landsel admits in the opening that he’s been in the travel writing game 15 years, I’m guessing he might benefit from a less jaded perspective. And in this spirit I’m offering these 8 observations on how this piece could’ve been less lame.

1. There are no “destinations.”

A “destination” does not exist in concrete reality. It’s an abstraction, a term for marketers or advertisers. To everyone else, from locals to visitors, what you’re referring to is called, simply, a “place.” The entire mindset of how you look at the world and how you describe it begins here.

Instead try: Eliminating that shit from the title and your mind.

2. It’s never the place’s “fault,” but your own failure of imagination.

One of the odd realities of our times is that people literally make life decisions — where to move, where to retire, where to travel — based simply off internet articles like David Landsel’s. They read that Sarasota is rated AOL’s “#1 beach,” and target this as their potential retirement spot. Or they avoid Buenos Aires because they read that the setting is “as appealing as Nebraska.”

Thus people’s travels, sometimes their entire lives, become cycles of expectations or preconceptions, and then having those expectations either met or validated or surpassed — whatever the case ends up being — and then some of them, like this author, go back to the internet and write about their travels strictly through this lens, thus continuing the preposterous cycle. This is how we’re conditioned to see the world; it’s the genesis of Landsel’s “Is that all there is?” mentality.

Instead try: Flipping the question “Is that all there is?” from the place onto yourself. What expectations did you have going in? Why are you there in the first place?

3. Places are not interchangeable.

Only in an abstracted, marketing sense could one place ever be interchangeable with another. In his roundup, Landsel compares Hawaii with Costa Rica, saying that we already have a place “like Costa Rica,” only “in our own country.” It’s as if his only criteria were “exotic flora and fauna” and the obvious cultural, historical, linguistic, and geographical differences didn’t matter at all.

Instead try: Looking at each place in its own context.

It’s important to understand the difference between writing / journalism and outright propaganda. Nonfiction writing and journalism is predicated on communicating facts. Advertising is almost the opposite: It’s the art of suggesting without actually saying anything factual. This is accomplished through abstracting ideas and then remixing or repackaging them into slogans or other rhetorical devices such as personification, calling a city “an old friend,” for example.

Throughout the piece, Landsel personifies place and uses other classic marketing constructions: Berlin is “an awkward teenager;” Detroit is “more honest” than Chicago.

Instead try: Just being straight up. How can a place be “honest”? Tell us the actual story of who was dishonest and how this affected you.

5. Gross generalizations and “speaking for” other people just highlight your privilege.

Throughout the article, the author glosses over or reduces complex histories and contexts into (“gleefully”) short suggestions, which is another marketing technique. For example, he explains:

The best reason for Americans to bother with pricey Europe these days is to roll around in the continent’s colorful past.

The continent’s “colorful past?” There’s a sense of travel proffered here almost like a video game:

After stopping to admire one of the most attractive cities in the world, you will probably be hungry, in which case you should leave Prague as quickly as possible in order to get to Vienna, where you can eat and drink like a civilized person. From here, it’s an easy ride to Budapest…

Most importantly though, there’s an element of “speaking for” other people and cultures as if their problems or issues were the author’s to deal with. Probably the most egregious example is where he lumps the entire region of “The Caribbean” together and gives it a single verdict:

You can go sit on a beach and soak up the sun in all kinds of places that are easier to navigate. Sad fact: Most of the Caribbean islands worth visiting are, these days, an expensive and time-sucking nightmare to reach. Also: Too many of the islands are depressingly violent, pathetically corrupt and / or hopelessly dysfunctional.

Instead try: Speaking only for yourself.

6. Give us specific, ground-level details.

The piece is full of cliches and marketing language, making everything sound like a brochure for the place instead of evincing any real connection. Instead of Asheville, we’re instructed to go to “magnificent” Mt. Mitchell with it’s “impressive” height, or Prague, which is simply one of the “most attractive cities in the world,” or my favorite, the “boundlessly dramatic” Rio de Janeiro.

Instead try: Giving specific details beyond the most stereotypical “beach towel at Ipanema.”

7. Look beyond yourself; there are other people in the world.

Notably, while places are personified, there are literally zero mentions of any actual people in the entire 2,104-word article. The only thing close is the mention of “crowds” (as in crowded ski resorts) and a couple of bitter caricatures of San Francisco:

The surly, do-as-little-as-possible hotel employee, yet another restaurant server who just doesn’t give a damn, or perhaps a fortysomething hipster who takes her job as a latte jockey way too seriously.

Instead try: Narrating some of your interactions with people.

8. People have all different motivations for travel.

The real essence of this piece, and likely why it became so popular on FB, is that it’s truly mainstream-normative; there’s a vague sense throughout that the only reason people really want to travel is in a vacation modality, and that all that matters is accessibility and price. Buenos Aires isn’t “worth” the thousand dollar plane ticket (in spite of “cheap” steak and wine and “outstanding” ice cream) because the “setting” and “architecture” aren’t all that great. Or take his alternative to “The Caribbean”:

Instead, try Just go to Mexico. Tulum or anywhere in southern Baja, which ever is closer. Both of these destinations in Mexico are quite safe, attractive, reasonably easy to get to, fun and often very affordable.

Instead try: Being original.

* To learn more about how to become a travel writer, check out the MatadorU Travel Writing course.